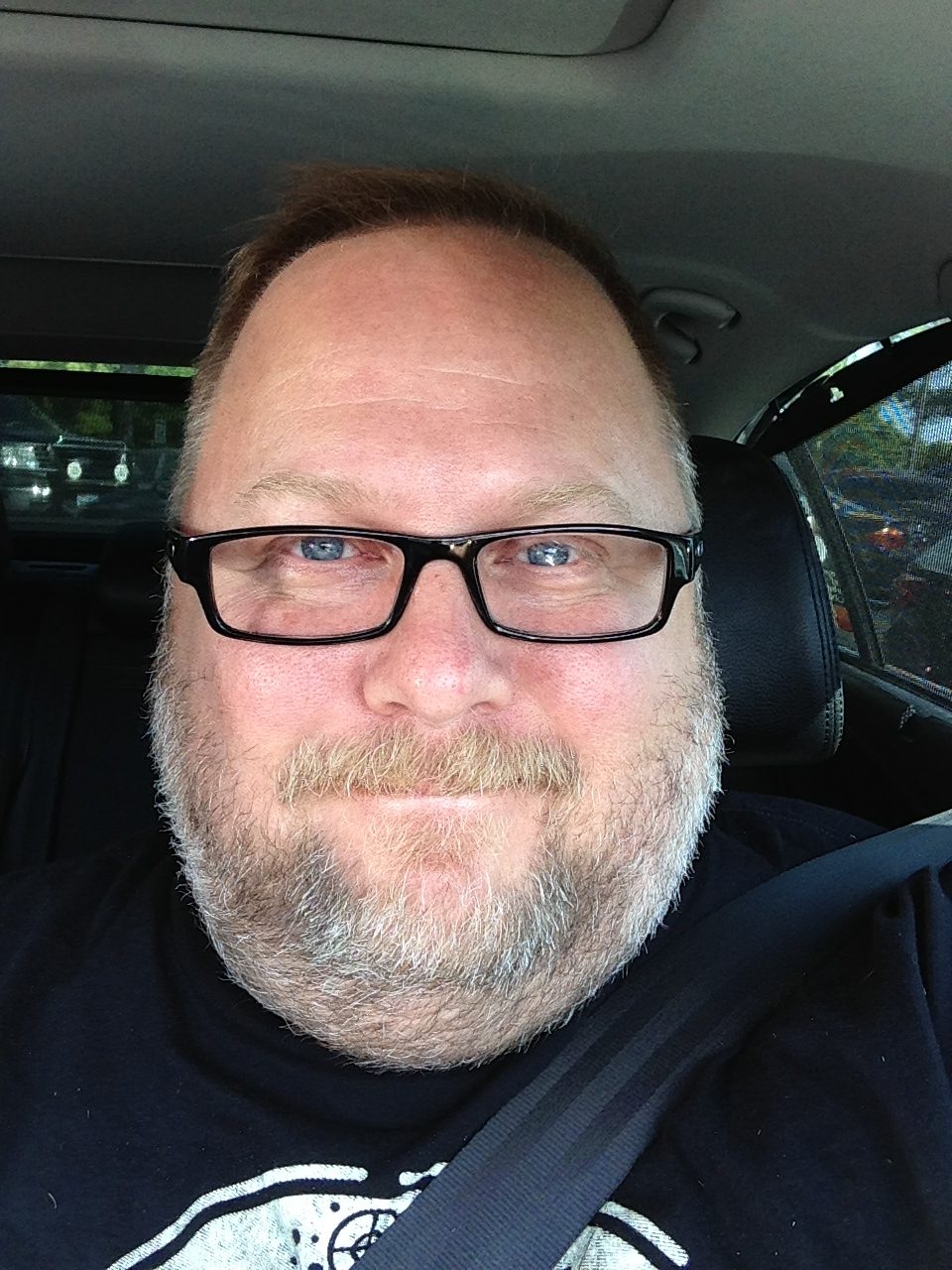 Not all we men who struggle with our weight are raised with sloppy discipline or bad habits – in fact, it’s often the guys in peak condition, who train hard and eat, er, harder, for whom the sudden cessation of exercise can have a massive impact. We’re all used to hearing men (particularly in ’90s sitcoms) complain that when they were young they could eat what they wanted and never gain weight, but as soon as they hit 30 it all goes south – probably true and probably due to a decrease in activity without a decrease in pizza consumption or alcohol to match it. Apply that model to a U.S. Marine and it’s easy to see why the switch to more sedate work could trigger weight gain. Now, how to turn that weakness into a strength… After leaving active duty in the Marine Corps, I continued to eat as I did while I was in, but without the exercise I ballooned in weight very quickly. I gained weight so fast I actually have stretch marks. My first job out of the Corps was technical support, and I went from a very active lifestyle to sitting at a desk all day.

When I think of the Corps, I think of incredible discipline and fitness, do they have a strict diet?

There is definitely a focus on fitness in the Marine Corps. We were doing organized PT three times a week and it was recommended for us to do PT on our own for at least another three days a week. As for strict diet, it wasn’t strict as much as it was full of carbs. Since we were doing so much physical activity, we ate lots of carb-heavy foods to give us energy. Being young and incredibly active kept our weight mostly in check. I was one of those who struggled with staying within the height/weight requirements near the end of my service due to my lack of strict adherence to the recommended PT outside of organized PT. The heavy carb diet started taking its toll on me. So many. Sitting in seats at restaurants because I couldn’t fit into booths, being squeezed into airline seats (and being embarrassed when I encroached into adjacent seats and dying inside when I saw the look of dread on someone’s face when they realized they were going to have to squeeze in next to me). I was unable to walk long distances and vacations were always abbreviated due to my lack of mobility. There were activities my wife and I wanted to take part in that were physically impossible for us to do (zip lining, hang gliding, sky diving, etc). I always felt tired and it was getting difficult for me to tie my own shoes. [blocktext align=”right”]”My wife says I have very strong willpower, but honestly, it comes down to perseverance”[/blocktext] My cousin Sarah. She’s a PA, and she told me that I didn’t have long to live if I didn’t make a change. I told her I didn’t want to do exercise, and she told me that it was possible for me to lose weight without exercise. She did a Whole30 and she had adopted the Paleo lifestyle and that got me thinking that it was possible for me. I also started reading the Reddit sub /r/progresspics, /r/whole30, and /r/paleo. It all made sense to me, and it felt like I could make the change for good. I discussed it with my wife, and I told her that I needed her to do this with me to save my life. She agreed, and with her support, I’ve been successful at losing over 110 lbs in 13 months. Sticking with Whole30 and Paleo. My wife says that I have very strong willpower to stick with Paleo as strictly as I do, but honestly, it comes down to perseverance.

Do you think your experience as a Marine has helped you in your weight loss? Do you think initially it hindered you when you left?
Being a Marine definitely helped in my weight loss. That is where I learned perseverance, motivating myself, and dedication. I also learned that surrender and failure are not options, and I did everything I could to avoid both in my weight loss journey. I told people I was going to make it; there was no way I would go back on my word. As for it hindering me when I left; I think what hindered me most is that I had a negative perception of exercise after having to do it as a job for 11 years. Had I kept up with exercise when I was discharged, I would have reduced my weight’s rate of increase. I hadn’t yet learned about the importance of low-carb diets back then, so I’m certain the weight would have come on, just not as quickly. What do you eat over the course of an average day?

Before, I did’t eat breakfast. I would drink lots of coffee. For lunch, I’d go to Schlotzky’s and order a large sandwich and eat some potato salad with it. Perhaps go to a local Mexican restaurant and eat three enchiladas with cheese, rice, beans, and lots of chips and salsa. Dinner would be pizza, pasta, Mexican (fajitas for two, except I ate them all), or sushi (four or five rolls, salad, soup, and dessert). There was also the chocolate I was addicted to: I’d go through a bag of Dove’s chocolates each week.  Now, I start each day with two eggs sunnyside up and two slices of no sugar added/low sodium bacon. Lunch is typically a pre-packaged meal made by my wife and I on Sundays which is the same as a dinner: this week, it’s either a Paleo chicken massala, Paleo Greek lamb balls, or Paleo Tex-Mex casserole. The sides are either broccoli, cauliflower, or a green bean/tomato mix.

All the recipes we use are on my wife’s blog at ourdailybacon.com. I also have links to her blog on my own, paleomarine.com.

I was fortunate. My weight loss for the first 12 months held steady. The first month, I lost 20 lbs. For the following 11 months, I averaged 10 lbs a month with any plateaus lasting only 2-3 days at the most. After the first 100 lbs was lost, the last 13 took me 2 months, and this last 12 lbs is taking a long time. I’m sort of in a plateau in terms of weight right now, but I am getting thinner, so it’s not really a plateau in terms of success or efficacy of my journey. In many ways. I feel younger, I’m more mobile, I’m more flexible, I feel stronger, I am able to engage in activities I could only dream of a mere year ago, and I have more energy. I am able to think more clearly, I am free of cravings, and flavors taste more vibrant now that I’ve cut out sugar.

My wife. She is the rock to which my success was firmly tied. Without her help, I would not have made it this far. Nobody really got in my way, fortunately. Everyone close to me understood that my health was in a bad place, and that if things didn’t change, I would probably not be around much longer. I was fortunate to have support from everyone dear to me.

The way people treat me now. I never thought there was discrimination against overweight people, but now that I’m thinner, people are much nicer to me. Women flirt, and men want to be my buddy. It’s very strange to have this happen so quickly.

That life didn’t have to be that way. That you can lose the weight without any tricks or without killing yourself in the gym or on the road. You can do it while eating a variety of delicious foods that fill you up and free you from cravings. You can do things you could only dream of just by changing your diet.

You’re President for the day, what one law do you bring in to help others who are obese?

To force the FDA to put out better information about the harmful effects of sugar and to eliminate the low-fat recommendations.

I did’t start running until September 10th this year. I began with a 1.6 mile run and I’m now up to 4+ miles every other day. Exercise was not a part of my journey until the end, and even then, it was not to lose weight, but to get fit. For most fat guys out there, I know what they object to: exercise. Well, I did too, and I was able to lose over 100 lbs in a year without a drop of sweat or an extra step. You can do it, too! No tricks or gimmicks! Our thanks to E.J. and don’t forget – as with all our Amazing Losers and their weight loss before and after stories, you can find him on Talk and ask him anything you like!