There’s a new report out by those too-often unsung heroes over at Men’s Health Forum, called The Gender Data Deficit In Local Health, (yeah, we know they need a course in linkbaiting their report names). It’s well worth a peruse because it’s something that all men (and women) should be making a stink about. 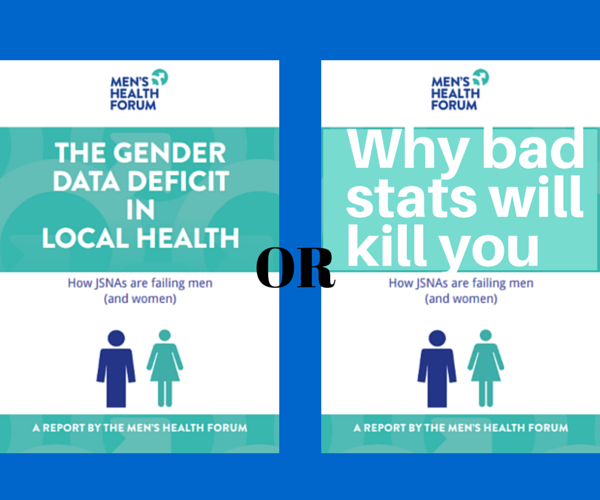 So what’s the deal?

Local authorities are not collecting NEARLY enough detail when it comes to their health stats – minor things really, like whether you’re a man or a woman.

The report looks at JSNAs (Joint Strategic Needs Assessments) which is essentially the key document that Local Authorities look at when assessing what health provision they need to do in their area. In short, if your local council needs to spend money on services like mental health or weight management – this is what they use to inform that decision.

Only 27 out of the 147 Local Authorities had their reports broken down to show gender stats. In short, the overwhelming majority of local authorities don’t really know what the state of men’s health (and women’s health) is in their area.

We know that 67% of men are overweight or obese in the UK – amounting to over 20 million men. As a result of this men are dying sooner than they should. Fact. We also know that in the vast majority of cases your Local Authority might not know the scale of the problem in their region. How can they provide relevant services if they don’t know the figures?

See also  The Denim Guide for Guys With Big Thighs

So if you want to understand about male obesity or smoking statistics then unfortunately none of those are available. Your jaw should pretty much be hanging down at this point.

4) They collect pretty much nothing on men and mental health

Figures show that suicide is the leading cause of death for men under the age of 50, and that 78% of suicides are male – despite women getting depression more. And yet only a handful of the 147 Local Authorities are actually collecting information about men and mental health. Big Data isn’t going to solve the problem of men’s health alone but only collecting tiny data will damage it.

5) Men’s health is in a pretty terrifying state

It’s no wonder we don’t go to the doctors. One in five men will die before the age of 65. That statistic is terrifying – lifestyle issues, illness, suicide – all of these things are prematurely killing brothers, husbands, uncles, dads, grandads. Much more is needed to be done to help the health of men improve. Better data from Local Authorities might help us address the fact that 75% of premature deaths from coronary heart disease are male and men having a 67% higher chance of dying of the cancers that affect both men and women.

To be emphatic – we don’t want a better balance of death between the sexes – we want less death all round! This can only happen if and when we have the data to help inform the right sort of health services. Some Local Authorities are doing this already and we know that others can join in and provide the services that men need and deserve.

See also  How To Be A Great Diet Friend

See how much your local authority knows about male and female health concerns in your area and strongly consider asking your MP to raise the issue. This is something that we all need to work on.