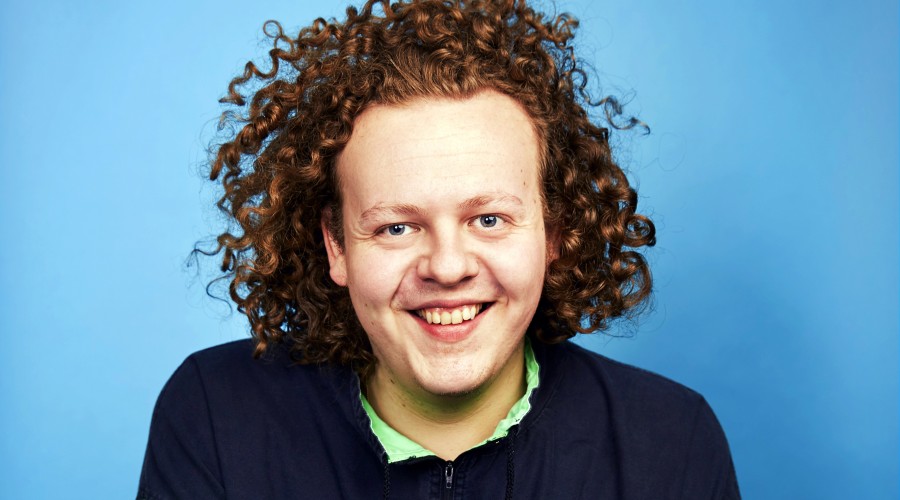 Jack Rooke is something of a stand-up curiosity. A naturally, funny and engaging figure who eschews the idea of out-and-out jokes and trite content-free shows, in favour of painfully funny stories embedded in moving and even motivating programmes. In an era when the bad-taste gag often grabs the headlines, it’s refreshing to see someone creating shows that are more about emotional punch rather than glib punchlines. To celebrate his new series Happy Man (all episodes embedded in the article – you’re welcome) we spoke to him about his history with binge eating, why Quavers won’t get him and how he tried to bowl his weight away.

First of all, tell us about Happy Man. Your first show Good Grief (which is brilliant and still available on iPlayer by the way) dealt with a period of tragedy in your life. What are you focusing on with this show?

Happy Man is about the solutions to the male mental health crisis in this country outside of just talking. It’s about finding the things that young men can do that are free and are easily accessible and that perhaps aren’t being run through the NHS, but that still support good mental health. There is a sort of failure in the support system infrastructure in certain areas in this country that means that some men don’t get the help that they need.

The series is inspired by my friend Olly’s suicide. He took his own life when he was 27 and I genuinely believe that earlier intervention for him would have been a life-saver. But it’s really a celebration of him and I don’t want it to be too sad or depressing. I want the programme to inspire and empower people to have more tools to help themselves.

Men’s mental health has been gaining a lot of coverage recently because of the efforts of Princes William and Harry to bring #headstogether and get people talking about mental health – is that enough?

The current mainstream coverage of mental health is so saturated with calls to talk and just conversations about conversations. For me, it’s really unproductive to encourage men to talk and go to their GP if they’re then going to cock-up all of that bravery by putting a bloke on an 18-24 week waiting list to do something about the way they’re feeling. You need to sort out the infrastructure and the support services in this country before you have this clarion call for men to go out and talk.

That’s why I’m really proud to be an ambassador for CALM and I have been since I was 18 years old. I think they fill in the gap that the government have created by supporting men in a way that is accessible to guys and that is friendly and approachable and funny and life-affirming. It’s great to see mental health rising to the top of agendas but I’m never sure if it’s just wanking into the abyss about talking without actually sparing a thought for what could be the solution. I think it needs infrastructural reform and more solutions that are free and easy which is what Happy Man is all about. In the programme I’m meeting up with lots of different men who have done quite radical things like cold water swimming, running and drag all to help themselves feel better.

You also try posing for a life drawing class in the programme. Would you say that was a good motivator to feel better about yourself?

I’m going to make this one easy: no.

Ok. Male body image is a growing issue, or it’s one that is gaining traction as an idea that maybe men sometimes don’t feel wonderful about how they look. Is that something you see in your own life?

I think with male body image it’s either end of the spectrum. Unfortunately, you’ve got bigger guys who possibly have low self-esteem who are really starting to feel the crunch of not meeting up to masculinity’s portrayed ideal. Then I think you’ve got blokes who are really missing the point of life because they’re just thrashing themselves with protein shakes, obsessed with fitness and image because it’s clearly filling a void somehwere else. It’s the boring age-old thing of saying that we need to be balanced.

You’ve lost a lot of weight yourself recently, so well done for that! What was your motivation behind that?

I’ve wanted to lose weight recently for health reasons and because, I won’t lie, it’s a hard thing to be successfully homosexual, be fat and get laid especially when gay culture really, really promotes a hyper-masculine, oiled-up Greek God image. So I think for me I had those concerns and it’s hard to balance both vanity and wanting to be happy and to be embraced whatever size you are. That’s what I hope Happy Man has is this idea that you know what, fuck it, I don’t have the most stereotypically ideal of masculinity but my masculinity is beyond muscles. The reason I’m an incredibly strong man is because I’ve dealt with so many quite tragic experiences and come out the other side, able to laugh and to celebrate the people I’ve lost. I think that’s what marks you out as a strong guy, rather than someone who is addicted to protein shakes.

So how did you lose weight then? Got any tips you could share?

Generally, I was just looking after myself and watching what I ate. I tried a few weight loss programmes with my mum, Slimming World but it wasn’t really for me. I liked elements of it, people coming together as a community and having a joint goal. I thought what was interesting about a weight loss group was that it gave you a safe space to fail in and I think in society these days there are very few places to fail. You can’t fail at work. You can’t fail as a parent. You can’t fail online. So to go to a weekly weight loss meeting and if you’ve put on and failed you find that people are still supporting you. I thought that was really human and I loved it. Then on the other hand I was like, “Oh my god this is a cult.”

Fun fact about you is that you’re a brilliant ten pin bowler. Perhaps it’s less well known though that you actually started bowling to lose weight – is that right?

It’s true. When I was a teenager my GP told me that I needed to do more sports because I was overweight. My dad wanted to do something with me and him on Saturday mornings and the local tenpin bowling club was there and open and so rather than actually doing physical exercise I just rolled a 14lb ball down a lane in a warehouse that smelled of feet and sick. Me and my dad ate worse food because every bowling alley in the country is right next door to a McDonalds and they also had hot dog vending point inside the lanes, so it was utterly pointless for weight loss. The best thing I take from it though and my one tip is that with losing weight it was good to try and do it with someone else and have that support (the MAN v FAT Forum is this way).

In Good Grief you were very open about binge eating – what do you think about that now?

For me it used to be really bad. It happens when I feel quite low and it’s about control for me. Food and control are intrinsically linked in a lot of people’s lives, it’s one thing that you can control how much or how little you put in your body. I found that any time I’m stressed I find myself walking through the kitchen opening cupboards and I catch myself and think, “What am I doing!?” You’re just opening cupboards looking at food and it’s mad. You realise that you do it in a daze and then you think, maybe this is why I’ve got massive tits.

You’re touring from April 28th until June 24th (tour details here), how do you manage to stay healthy on tour given that garage forecourts are notoriously hard to find salad at.

It’s really boring, but it’s just planning. It helps having a stage manager that is fat phobic, so he’s definitely not going to let me stuff my face with Quavers which is a good thing. It’s doubly important to eat and live well on tour because your mental health is paramount and under pressure. If you were eating McDonalds all the time you’d kill yourself half way through and I really don’t want to end up feeling suicidal at a service station at Leamington Spa.

Thanks to Jack for speaking to us and let us know what you think about Happy Man over on the forum.