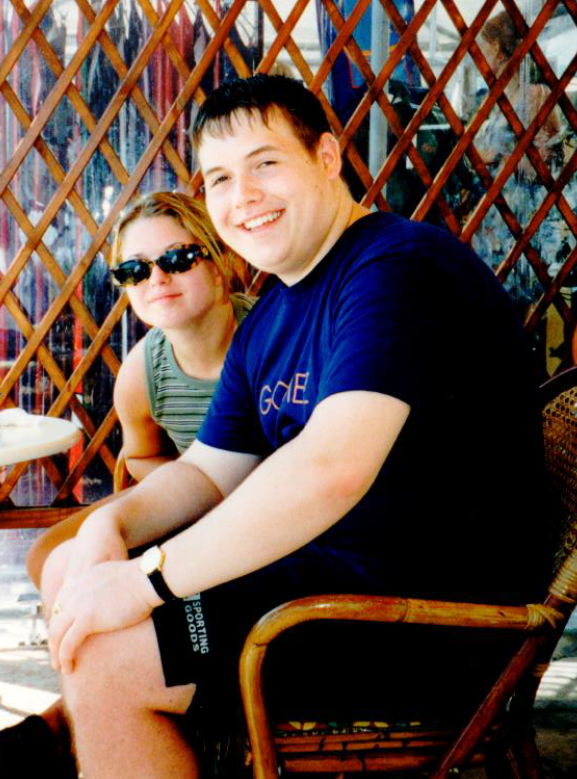 James, I’m really pleased to be sharing your story not only because you’re a great inspiration, but also because you freely admit you lost weight in the wrong way with an extreme diet. I know from emails and posts on the forum that it’s something that crops up time and time again with guys – tell us what happened?

To start with I began with a really simple plan, I would eat three meals a day and not snack at all. I also cut out alcohol completely to begin with which was quite a tough ask given I was at university at the time! I started to notice the weight coming off and the more I noticed this, and other people began to notice the more addictive it became. 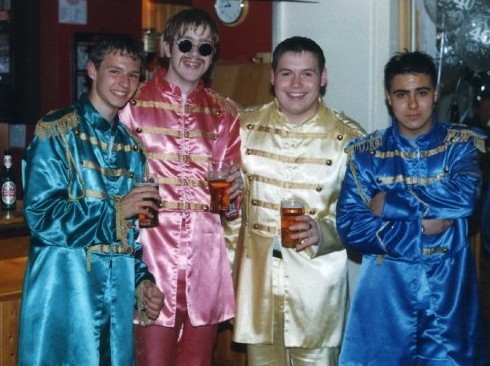 I had heard about the Atkins diet but didn’t research it properly so perhaps my understanding of it wasn’t right. I literally just ate meat and yoghurt. The weight fell off me, at around 7 lbs a week. I was also going to the gym three times a week and just doing cardio. It became a complete obsession, NOTHING would pass my lips that wasn’t what I perceived to be the right things. I remember one time I was on an aeroplane and they passed around boiled sweets to help with ear pressure. I sucked the sweet until the plane landed then spat it out and spent the rest of the day panicking about the extra calories this might have added!

Wow, that’s really extreme, how on earth did you manage to keep it up?

Well, I eventually got down to 10st. I still thought I looked fat but looking at pictures of myself at this time I looked ill. In fairness I was ill. My skin turned yellow through liver damage and I looked gaunt and tired all the time. Eventually, my friends and family persuaded me that enough was enough and I started eating carbohydrates again. I had decided by this point that I wanted to train as a personal trainer so I could help others and felt that my experiences would give me the empathy and understanding that perhaps other PTs might lack. 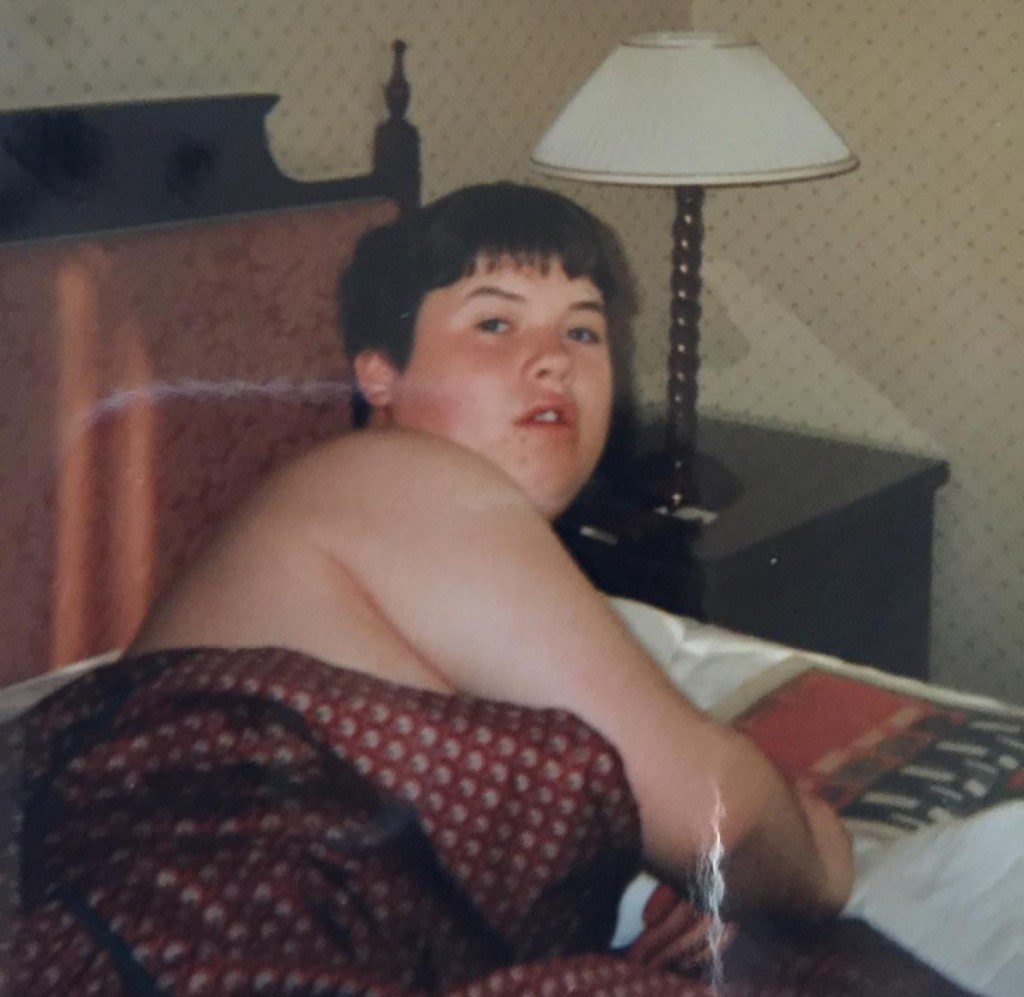 I take it you didn’t start marketing the meat and yoghurt diet plan then?

No! Through my personal training course I had my eyes properly opened to correct nutrition. I went on to complete an advanced nutrition course and these days I eat a healthy, balanced diet. It is a high protein diet as I am a competitive U90kg strongman. My weight is currently 14st but with a body fat of 12% I am, for the first time in my life, happy in my own skin. I eat sensibly and treat myself when I want to – I train hard so the odd naughty day will do me no harm! 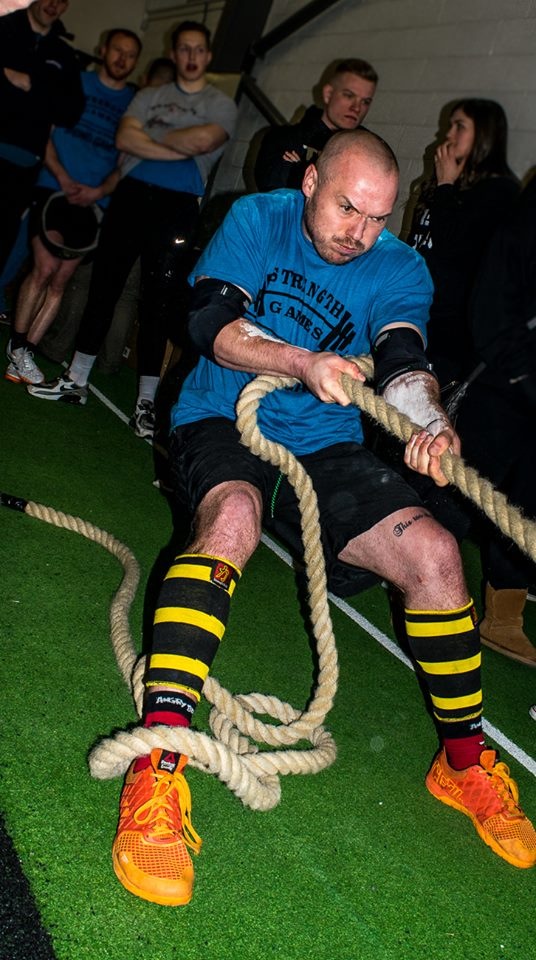 I was never into sports. I had friends but none of them lived near me as a child so I was never really playing out in the streets or running about much. I was mostly into books and computer games, both very sedentary activities. As I got older I obviously starting going drinking with friends and this exasperated the situation. I would love to say there were excuses for all the weight I put on, but there really aren’t. I have to hold my hands up and say I was lazy. Lazy and a pig when it came to food. 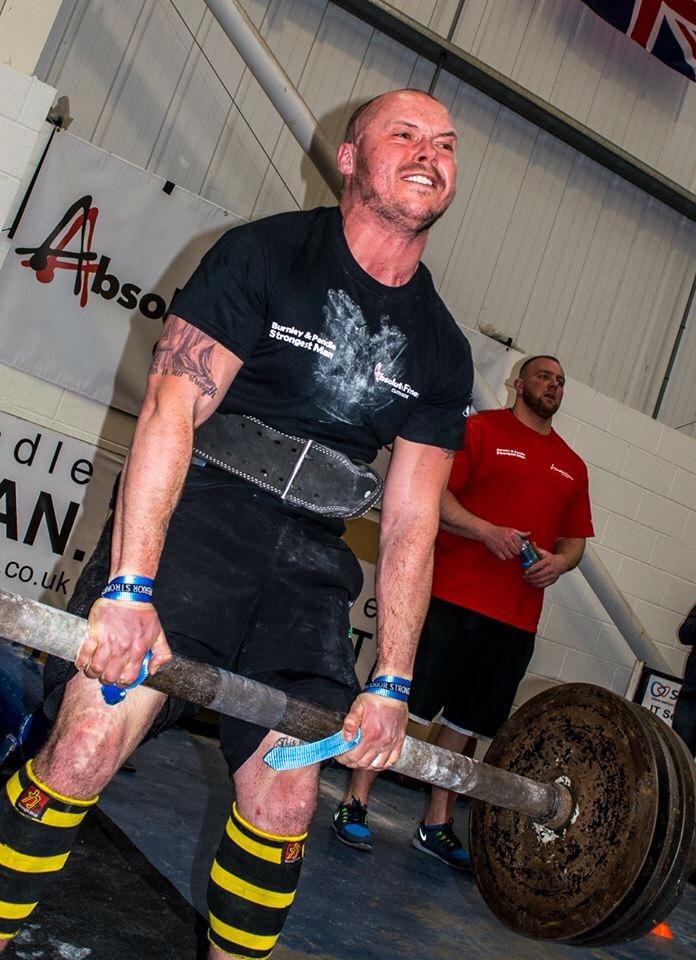 What sort of mistakes were you making on the foods and drinks you had before you changed?

In a typical day I would eat two bowls of cereal for breakfast, usually something like Coco Pops or Frosties but I would add a lot of sugar on top too, all with full fat milk. Or if it was the weekend a full English fry-up would be more likely. I would pick throughout the day on crisps and chocolate. I was a big lover of chocolate milk and could drink up to two litres of this a day.

Lunch would consist of something like pizza and chips or if I couldn’t be bothered cooking I would eat maybe a packet of crisps, a chocolate bar and a fizzy drink. Dinner would usually be my healthiest meal of the day such as chicken with potatoes and vegetables, but then I would ruin it with several slices of bread and butter on the side. I would then snack into the evening.

It wasn’t even necessarily nice stuff. If there were no treats in I would literally eat plain slices of bread. Looking back it’s embarrassing and pretty disturbing but I was eating for the sake of eating and was pretty much always looking for something to consume.

Something big must have happened to create such a strong change in the way you lived and motivate you to keep it going?

What happened was that I was walking down the street and my shoelace came undone. I physically could not bend down to tie it up. I had to keep walking until I found a bench so I could sit down in order to tie it. Literally 10 minutes after this somebody walking past me in the street said to his friend, “Jesus Christ, look at that lump”. This happened a lot. It never fails to amaze me how people always felt it was acceptable to pass comments openly. That night I resolved that enough was enough. I started the very next day. 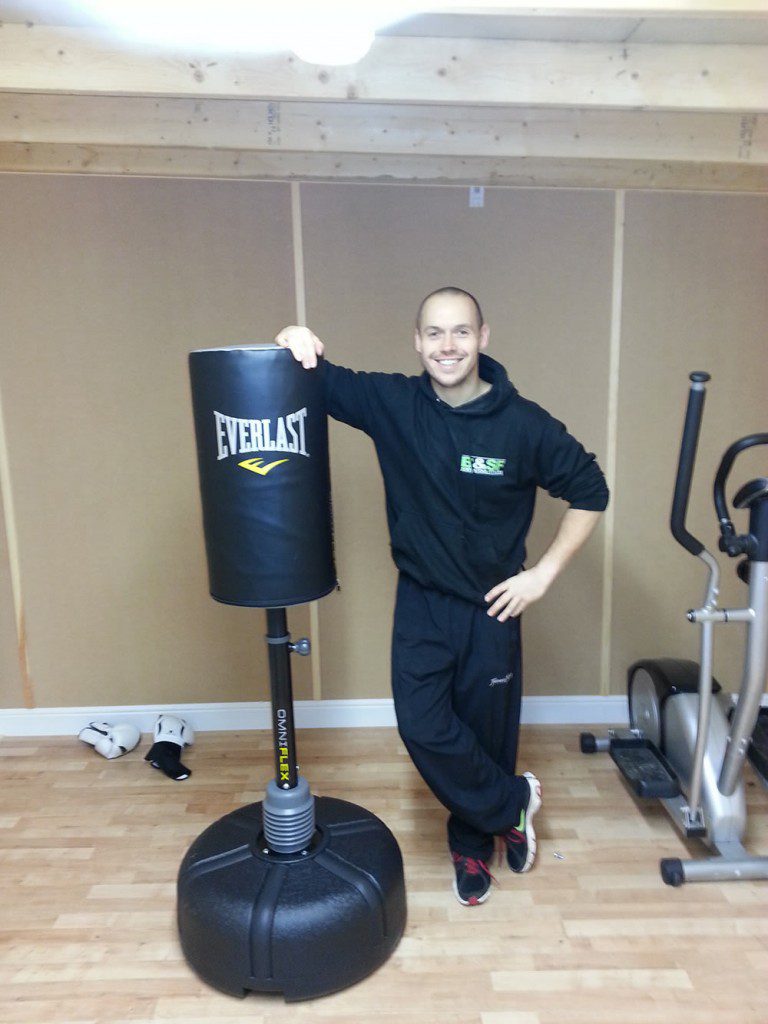 You talk about the comments and it’s something that so many readers have experienced, how is that different now?

The way people change towards you when you lose weight is incredible. The opposite sex is an obvious one, and understandable. But from your peers too. I have been treated with a huge amount more respect since losing weight by other men. This is sad, and wrong, but I suppose it is human nature.

The other horrible thing I remember about being obese was sweating. I always had to think very carefully about the colours and materials of clothes I would wear. I remember one night I was out for a meal with friends and was wearing a lime green shirt and I could feel and see huge sweat patches under my armpits. I spilt a drink on myself on purpose so I could go home and change into a black shirt. 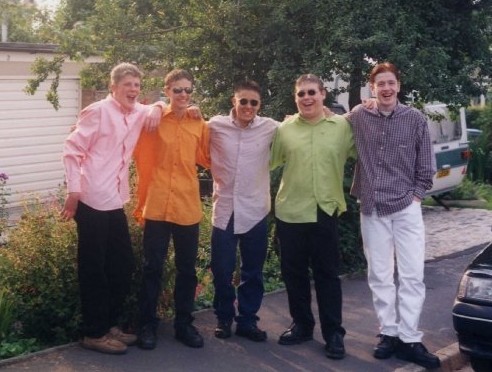 Thigh chafing was another, if I would walk for anything more than 10 minutes my thighs would chafe together and cause a rash which was obviously very uncomfortable. And not being able to do the things your friends did growing up was horrible – I couldn’t run, play football, climb trees etc. Being so large is very restrictive.

As someone who openly admits you didn’t do this in the right way, at least initially, and as someone who has changed a lot since then what are your thoughts on how you lost weight?

The whole process was mentally and physically draining. I think once you have been fat, that never leaves you mentally. You will always have a slightly odd relationship with food. I’m ok with that because food and nutrition is important and to have that at the forefront of one’s mind I think is a positive. I think carefully about what I consume now, but my head is screwed on these days and if I want a treat I have one. I never binge anymore, I think that’s the important thing. Binging is damaging in every respect. 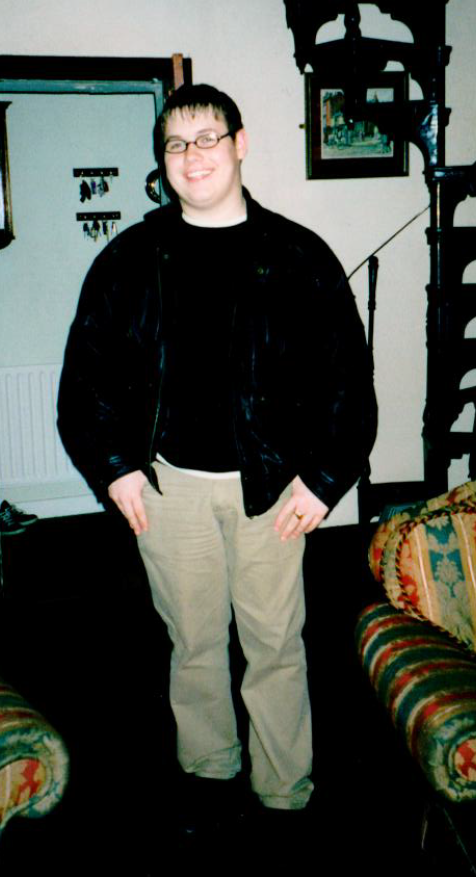 Everything has changed. As I say to my clients, everything improves when you lose weight and live a healthy and fit life. I am fitter and stronger at 33 than I ever have been and I think that’s pretty cool. I rarely get ill, my skin is better, I am happier, more balanced, a better friend, partner and father. Too many people self-diagnose themselves with depression without first looking at what they are polluting their bodies with. If you are regularly smoking, drinking alcohol and eating processed and fast foods then of course you won’t feel at your best. 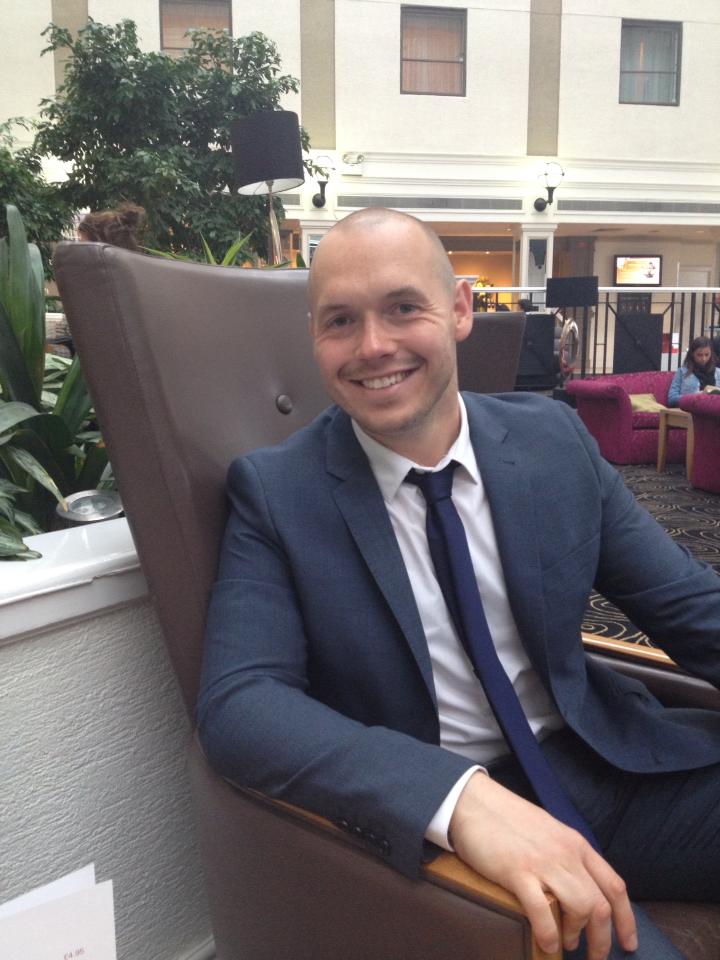 What myths did you discover while you were losing weight?

I guess I kept telling myself that it was in my genes, I was “big-boned”. I have clients who say this to me now. They’ll say “Well, I know I’ll never be a slim man” and I say “Why? You can be anything you want to be.” As I mentioned earlier, the way society treats you differently when you are a healthy weight is staggering.

That’s so true, men are always doing that – limiting what they can achieve by what they say, “I’ll never, I can’t…” It drives me mad! Do you have regrets about how you lost the weight?

It’s very easy to say I’d go back to me before this process and tell him to think about his actions, explain what he was doing wrong but if I am being completely honest I wouldn’t say anything. I am extremely proud of the person I have become and my experiences of being fat are a HUGE part of that. If I hadn’t had that journey then I wouldn’t be who I am today. Hopefully, because of what I experienced others won’t have to experience the same. On a more general note however I think education on nutrition at schools and college would play a key role. I am still amazed at the amount of people who come to me without even the most basic understanding of nutrition. 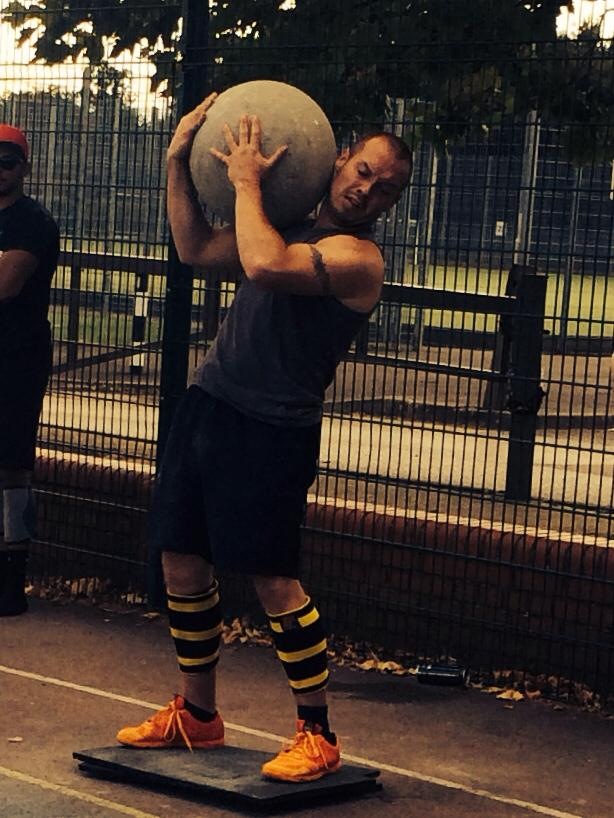 As I mentioned above education on nutrition is key. I don’t buy into this idea of taxing ‘unhealthy’ foods. That promotes a nanny state and at the end of the day people have to be allowed to make their own choices. A treat is just that, a treat. McDonalds and the like aren’t inherently wrong, but like anything if they are abused they can have a detrimental effect on your health. I think alongside education I would introduce free counselling and/or support groups for the obese because whilst it wasn’t the case for me I believe many eat to support or mask psychological issues.

Our thanks to James, for sharing his incredible story so honestly. Don’t forget you can ask him anything over on Talk now – like, how the hell did he survive on meat and yoghurt for so long?And if you’re an Amazing Loser, or you know of one, then get in touch.