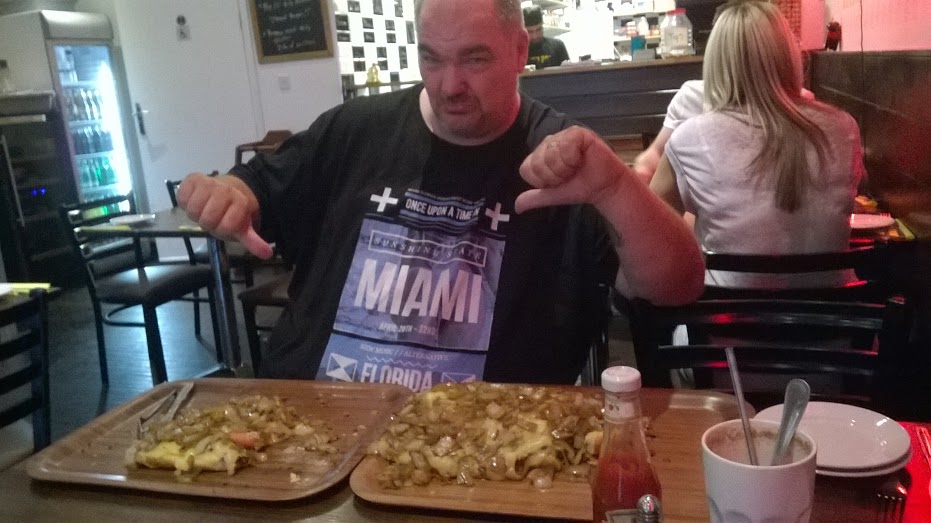 Keeping a positive mindset when losing weight is one of the toughest obstacles to face, as Amazing Loser Terry Smith found out. But with a bit of perseverance and willingness to try new approaches, you can be very successful… Why did you get to the position where you needed to lose weight?


I don’t think there was a specific reason, I was relatively active up until I was around 22, I used to teach windsurfing and ride bikes for fun. I just started letting go and becoming sedentary, or lazy if we are being honest. I never took any care with my food intake and over the next 17 years the weight piled on year after year at which point it then becomes harder and harder to lose it.

When I hit 40 I was around 29st and I was having real problems walking small distances. I had to park my car about 300 yards from my office and after speaking with my doctor he suggested I apply for a disabled badge to allow me to park closer. This kind of hit home and I realised my life was going the wrong way fast and at this point I decided to do something about it.

I stopped smoking, cut back on the booze and started going for small walks during my lunch breaks, walks which got longer and longer until I walked as far as I could in one hour. I then decided to start going to the gym and as I worked from 06:00 in the morning until 18:00 in the evening the only time I could go to the gym was before work, so I signed up to a gym close to home and went almost every morning for about two hours from 02:30 then went to work. During this time I spent some time on the treadmills and I slowly lost 6 stone over 2 years. I did a couple of half marathons and the London marathon in 2011 and all was going well. I was still 23 stone when I did the marathon and this did not do my knees any favours, I had to stop training for some time after this and my weight bounded back on.

I ended up at 31 stones and after seeing my doctor he told me I basically had 2 choices, have a gastric bypass operation or die young, I had been avoiding the operation at all costs as I thought it was cheating but now I had no choice. I was on the waiting list for about 3.5 years for a gastric bypass which happened in February 2015. Over the last year I have started training again but due to the effects from the operation the training is very difficult and there have been a lot of ups and downs. After losing 11 stone I am now down to 19 stone and training hard to eventually become an ultra runner.

I chose running because I hated it at school and I was always last so I knew it would be a serious challenge for me. Now I love running trails. It is still a huge challenge and I am still always last but the important thing is that I am still here and have a greater chance now of eventually seeing some grandchildren.

Simple, I want to live! Although I always knew my weight was bad for me, being told to apply for a disabled badge and that I could die soon made me re-evaluate things.

The gastric bypass operation was a major help but I still have to train hard and watch what I eat. I didn’t do any set diet, I just tried to watch what I was eating and how much I was eating. One of the problems with having a gastric bypass is that my body doesn’t absorb carbs very well and I have to eat a lot of protein. It is very tough to get the amount of protein I need and when on a run I can run low on energy fast, my surgeon was concerned about me having the op knowing what my end goals are and this is something I have to be careful about.

There were huge negatives of being overweight. I was out of breath all the time, had pain in all my joints when I moved (especially when going up and down stairs), but even without moving I was always sweating which caused excess body odour. I had to have my company supply me with a special office chair to handle my weight and when going to restaurants I had to ask them to put us at a table as I knew I wouldn’t fit in a booth.

But the one that hit me the most was when I went to Disney with my family and then while trying to ride a roller coaster I was told in front of my son that I had to get off as I wouldn’t fit. That was not only embarrassing but totally heart-wrenching.

I never thought much about it at the time, but I had many bad habits. I would order extra large plates at the likes of Toby Carvery and then put so much food on it that it would be falling off the plate. I’d finish everyone else’s leftovers and then still have dessert and finish off everyone’s dessert leftovers too.

Everything was always in excess. I was really bad with snacking as it is so easy to snack and snacks are cheaper than buying healthy/good food so when on a budget it can feel like the only option. I am still bad with snacking, but I am constantly working on this.

There were and still are a lot of plateaus. I am guilty of getting hung up on what the scales say and the one thing that everyone has to be careful of is not slipping into the mindset of thinking that if we suddenly stop losing weight we may as well give up because it won’t happen, it will happen, we just need to evolve our thinking which is what making life changes is all about.

It may be needing to address calorie intake again, getting thyroid function tested or stepping up the training a little, but what helps the most is reducing how often you weigh yourself as our bodies fluctuate every day so not every change will be a positive one.

You have to remain positive. I suffered a huge slump in my training recently and I couldn’t work out why. I tried various things but then met up with a group of ultra runners and listened to their stories, which led to my turning point – “Stop saying I can’t, stop making excuses”. I realised the slump was only in my mind – we will suffer pain and sadness but these are only excuses. If we lose a limb would this be a reason to give up? No! There are a lot of athletes out there that didn’t give up – the only reason to give up is death.

I am a lot less self-conscious. I no longer have bad BO and can buy my clothes from normal clothes shops and not be embarrassed to ask for my size. Everyone comments on how good I look.

At my highest weight I had a 61″ waist, now I have a 42″ waist and a lot of that is excess skin which I can’t do a lot about without an operation. I also still suffer pain in my joints as they were battered every day for years from being so overweight – some of this will get better but some of it won’t, it’s just something I have to live with and keep pushing through.

Who helped you the most?

My wife and son helped me the whole way. My wife constantly encouraged me and was behind me on every bit of training, she went with me to a few of the events and when I ran the London marathon she met me at the last 5 miles with my son and their support pushed me through the final, toughest bit.

She thinks I am raving mad but has seen the positive changes in me and is still pushing me along. She has also had a gastric bypass operation so knows what the effects are and how much it can change your life. How good I look!

Mug, stop pretending you are strong, stop thinking it will never get to you. Yes, I was very strong and I have lost so much strength but I am now stronger in heart and mind. I would show him pictures of his fat arse and said “Is this really what you want to look like? Do you really want people talking behind your back about your size and your smell? Change now before it becomes too late”.

Doctors should all have greater training in how to help obese people rather than just tell them they are fat and that they need to lose weight. There should be a law that if someone comes to them who either needs or asks for help they are given ‘proactive’ help such as being sent to ‘fat groups’ [*COUGH* see here *COUGH* – Ed] or to other doctors who have more experience with this issue and can show the effects from being overweight.

I don’t just want to help those who are overweight – I want to help guide the kids of today who are already heading in that direction. I want to show them how much better life will be if they change before becoming obese rather than afterwards, and how they can mentally overcome the barriers to staying healthy.

Our thanks to Terry for sharing his amazing story and photos. What do you think? How would you feel if you were given the option of having a gastric bypass or death? Let us know over on the forum. If you want support losing weight then just take a look at the schemes we run to help you.