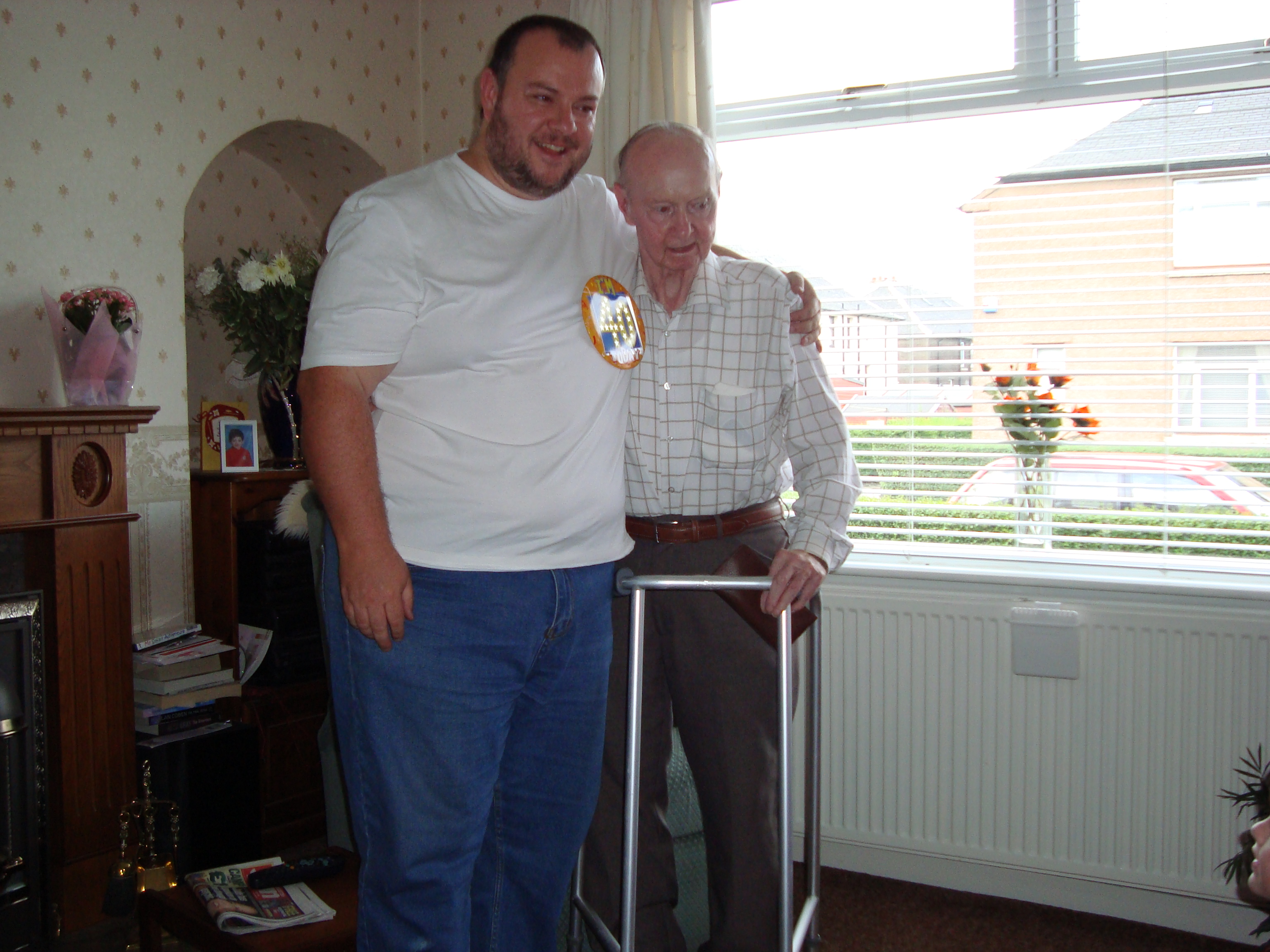 Scott – I know your weight loss story starts with quite a painful injury, which is something a lot of blokes have experienced – what happened?

I suffered a knee injury on Saturday 7th December 1991 whilst playing rugby for Falkirk rugby club. I’ll never forget that day for as long as I live! I was going to kick the ball in really muddy conditions and I missed, I span round and my foot ended up pointing in the wrong direction. I was carried off by some spectators and taken straight to hospital. I actually broke the knee joint which was a complete game changer for me in terms of what I was able to do physically and I was actually told I would never be able to walk properly again. 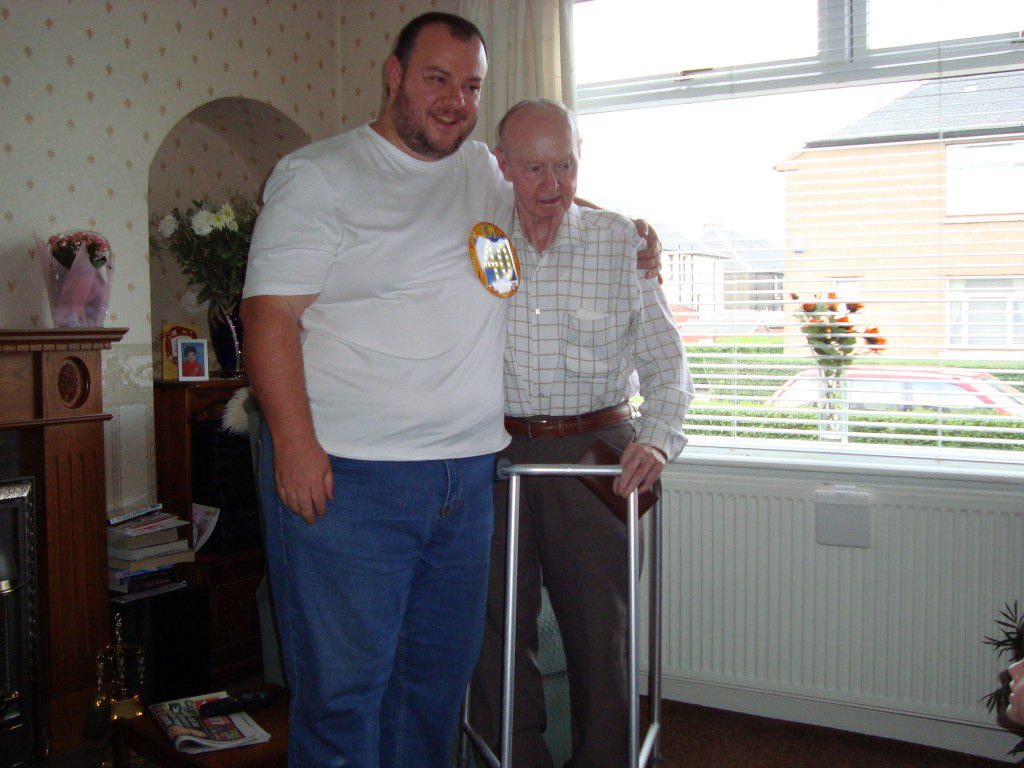 I had a plaster on my leg for two months, followed by a few months of physio after that but it took around two and a half years before I felt I was actually starting to recover. The limited exercise I was able to do meant the weight slowly crept on and before I knew it, I was nine stone heavier than I had been at the time of the accident and in the worst shape of my life…

So what was it that finally made you decide to do something about the weight?

I was experiencing increased pain in my legs due to the excess weight I was carrying – it had got to a point where I was pretty much in constant pain. It was then that I knew I needed to tackle the problem head on and commit to doing something about it in the long term. I started to crave big changes in my life. I realised this was probably the best chance I had of actually doing something about it – it was very much a case of committing to making that change before it became too late really.

Now you used Herbalife, which to be completely fair is not everyone’s favourite but you’re a fan though, can you tell us why?

Using Herbalife was surprisingly straight forward for me. The plan took the headache out of food for me, yet I never felt hungry and the weight came off steadily. I went on holiday to the US in 2013 fully expecting to put weight on, but I actually lost a further 5 lbs – mad, since I certainly relaxed my routine during those two weeks, although looking back on it now, I probably made healthier choices that I would have done several years before. Now that I have hit my goal weight, things are slowing down now, but I still enjoy Herbalife shakes as a healthy breakfast or lunch.

[blocktext align=”left”]I lost eight stone in a year, just from changing my diet, no exercise at all[/blocktext]

What sort of stuff did you eat?

I would start the day with a Herbalife protein shake, then mid-morning I’d eat lots of salad with a fair portion of meat (e.g. Chicken, turkey or pork), then another salad and shake for lunch with a tin of tuna and a packet of oatcakes mid-afternoon. Dinner was usually three or four lots of veg with a portion of meat on the side – either steak, roast chicken, fish, roast pork or gammon steak. I was a big guy so slimline portions weren’t an option for me. It was all about making small changes to my diet but eating the right foods also. 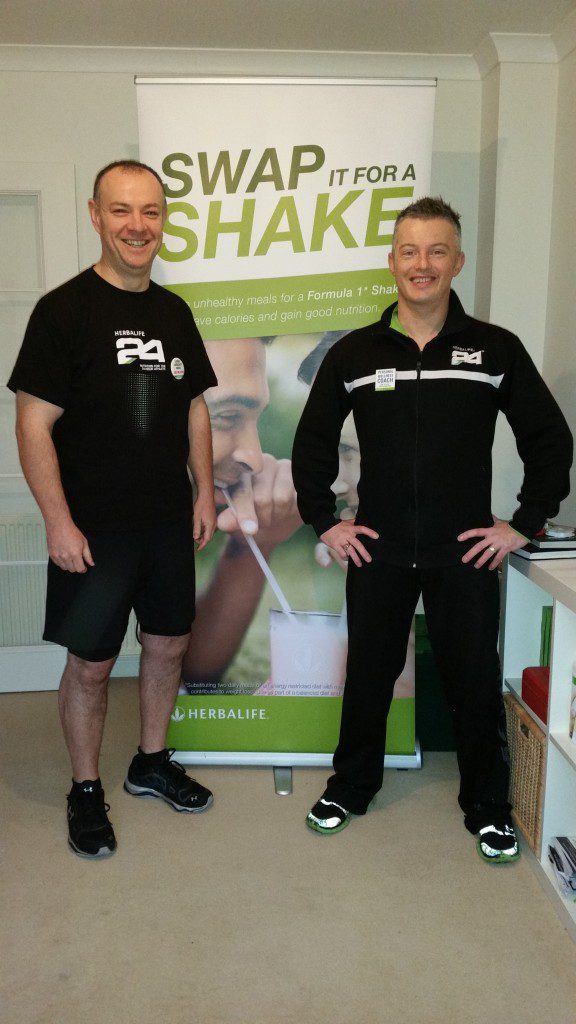 Because of the injury I wasn’t exercising at the beginning so for a year it was all diet that made a difference to my weight – I lost eight stone in a year, just from changing my diet, no exercise at all. After the year I felt like I was light enough then to start doing some light exercise and bringing in some cycling and rowing and some strength work. I possibly could have started that earlier but the diet was working for me and I was still worried about my knee.

You also got a Herbalife coach didn’t you?

I did, Allan Fleming, has been great – always there and with a wealth of experience to help get it right just for me. I’m not sure I would have had the same success without the weekly meet-ups, texts of support and tailored advice. I still see him every week and class him as a close friend. I’m also re-educated in nutrition – I know what to put in my body now, how to fuel it properly and how to support my health. I was lucky because nobody got in my way. All my friends and family have all been incredibly supportive. My wife and mum were as excited about the weekly weigh-ins as me as they couldn’t wait to see how much more weight I’d lost.

What do you think of the criticism that Herbalife gets?

For me, it works. I think some of the criticisms that it gets are people looking at the products and seeing them in isolation. Herbalife products work in association with a healthy balanced diet. Look at what I was eating and you could say that I would have lost without the Herbalife shakes, but I felt that they really helped. They gave me extra energy and kept me going. I do a lot of driving and previously, I’d be driving along feeling tired, but adding the shakes into a healthy diet really gives me all the energy I need and I’m fine now.

What advice would you have for others – possibly those who are carrying extra weight due to injuries?

For me, I waited too long to start doing something positive about my weight and in the end my size was just adding to the problem. No injury or illness is made better with extra weight. For me my knee became an excuse to put things off, I kept saying, I would do that, but I can’t because of my knee. It was rubbish – it was an excuse. If you’ve got an injury that’s keeping you from exercising then that’s fair enough, but it doesn’t mean that you can’t address the food that you’re eating. I lost eight stone in a year through changing my eating habits and living a healthier lifestyle. It’s all about commitment to the cause and a steely determination to make that change…

Are you one of the injury-plagued weight gainers? What happened? Why is it keeping you from doing something about your weight?