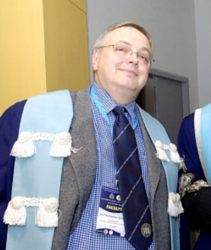 Like many men Chris Oliver found that his weight gain was directly connected to his work. In our first ever YouTube #amazingloser we speak to Chris about the surgery that saved his life, cycling across America and how NHS staff need to get into line with healthier choices.

What had caused you to gain the weight?

I do not think I really overate or had a significant eating disorder, I just stopped exercising for ten years! I spent my time looking after my patients instead of looking after myself. I was fit as a medical student and ran marathons and whitewater kayaked all round the world. In the gallery below you can see a picture of me when I was younger and more active. When I qualified as a doctor and studied to be a surgeon I stopped exercising and put on over 10 stone in weight. I have ten degrees and over 400 publications/presentations but I lost the plot with the work-life balance!

I was lecturing in China and was unable to climb a flight of steps on the Great Wall due to obesity and lack of fitness. My family all went on and climbed the steps and had a great time and I was left behind. I realised I had to do something. I had tried diets but they had all failed. I went directly to my surgeon Mr David Galloway who assessed me and said “I think you will do well after the surgery”. After that I felt I had to prove him right. I had the laparoscopic gastric band fitted privately in 2007. Your food intake is so significantly reduced you lose weight.

I lost about seven stone over the next seven months and started to get back into exercise. It began with going to the gym and seeing that they ran an aquacise class there, so I thought that would be good because it wasn’t putting a load on my joints. So I did that. Then at the gym they had exercise bikes and I started to work on those and joining in with the spinning classes. It took me a year before I could do the whole class including the hops and the standing up, but I wasn’t embarrassed, I just kept going.

That was just the beginning of the love affair with cycling wasn’t it?

When I had the bariatric surgery I had three weeks off work and actually stopped, which is very unlike me. During that time I made a bucket list of things I wanted to do. It started with the easy stuff at first like aquaerobics, I never dreamt it would lead me to cycle 3,500 miles across the USA on a bike six years later. The exercise just got a bit out of hand! The band has been a tool to make me and help me change my life.

How was the journey across America?
It was an epic adventure! I’d already cycled from Lands’ End to John O’Groats and the same company who did that put me in touch with another organisation who support the cycle rides across the States. It seemed like a momentous thing to symbolise the change in my life. My motivation was to get back to doing the things I did as a young man. None of us are getting any younger and I think exercise and looking after your health is a step towards keeping that at bay. With the journey across America I pretty well achieved that, but it took me a good three months to recover and I did get post expedition depressive syndrome on completing the cycle ride.

How has life changed now you’ve lost the weight?
There are lots of changes. My patients come to see me in clinic and ask to “see the consultant Mr Oliver”. I then reply I am “Mr Oliver”. MY identity has changed; physically, mentally and professionally.

What surprised you about losing weight?
I never dreamt I would ride 3,500 miles across the USA! You can read some more about the journey here. I also never thought I would inspire so many people and I certainly never thought I would end up being a national advocate for cycling, obesity and physical activity.

If you could go back to the person you were at your heaviest – what would you say to him?
I wish you will never need to have a gastric band when you are age 47, keep exercising, stay fit and look after yourself better!

For the full interview watch the film! Don’t forget you can ask Chris anything simply by jumping on the Talk forum. Let us know what you think of the video and don’t forget to Subscribe to the YouTube channel.