MAN v FAT is for men who want to lose weight. We run the award-winning weight loss programmes MAN v FAT Football and MAN v FAT Challenge, providing guidance, resources and community support to thousands of men all over the world every year.

MAN v FAT Football is a unique network of weight loss football clubs across the UK, exclusively for men who have a BMI of 27.5 or over. Players can score goals both on the pitch and off the pitch, as weight loss progress directly impacts your team’s performance.

MAN v FAT Football is for you even if you haven’t kicked a football since you were a kid. There’s no upper age limit and you can go completely at your own pace, so you don’t need to worry about your fitness levels.

Click here for the MAN v FAT Football website for more information and to find a club near you.

MAN v FAT Challenge is an innovative online-only weight loss platform for men with a BMI of 25 or over.

We’ve taken what we know works from MAN v FAT Football and created a weight loss community that helps Challengers lose weight wherever they are, whenever they need it. Teams complete weekly challenges centred around food and exercise and are supported by a dedicated Challenge coach to build healthy habits that add up to real lifestyle changes.

MAN v FAT was founded by writer, editor and publisher Andrew Shanahan in 2014. Having struggled with his weight for a long time, he joined his local slimming club. But it was aimed squarely at women and he struggled. This made him wonder – how many other men out there were struggling with weight loss?

We crowdfunded the initial run of the MAN v FAT digital magazine, and to our astonishment, we surpassed our target and received support from Jamie Oliver, the National Obesity Forum, Weight Concern and the British Dietetic Association. It turns out that there were a lot of men who felt the same way.

Along with the magazine, we launched the MAN v FAT website and wrote a book, which was published by Headline in December 2014.

In 2016, we took MAN v FAT into the real world with the launch of MAN v FAT Football – a football league exclusively for overweight men who want to lose weight. Uniquely, players are rewarded not just for winning games but for losing weight too, with your weekly weight loss counting towards your team’s goals.

Since then, we’ve launched over 100 MAN v FAT Football clubs across the UK, with a further set of clubs in Australia, where it’s known as MAN v FAT Soccer.

We became the first weight loss scheme to be officially endorsed by the FA. We’ve also received backing from Sport England, the National Lottery and countless local councils and football clubs. At the time of writing, we’ve helped men lose over 300,000lbs.

We’ve been featured in the media all over the world (literally, hello to our fans in Brazil!). We’ve been on the front cover of the Guardian, and have also taken up space on the One Show’s sofa on more than one occasion.

In 2020, we launched MAN v FAT Challenge when MAN v FAT Football sessions had to be suspended due to COVID-19 lockdowns. It was initially launched as a way of keeping MAN v FAT Football members on track, with virtual weigh-ins and weekly habit-building challenges to give them something healthy to focus on.

We were blown away by the success of Challenge and so when lockdown ended we decided to keep going with it. We now have members across the world and the programme continues to go from strength to strength, with local councils in the UK offering funded places and the launch of MAN v FAT Challenge At Work, a workplace weight loss scheme that helps to improve employee health. 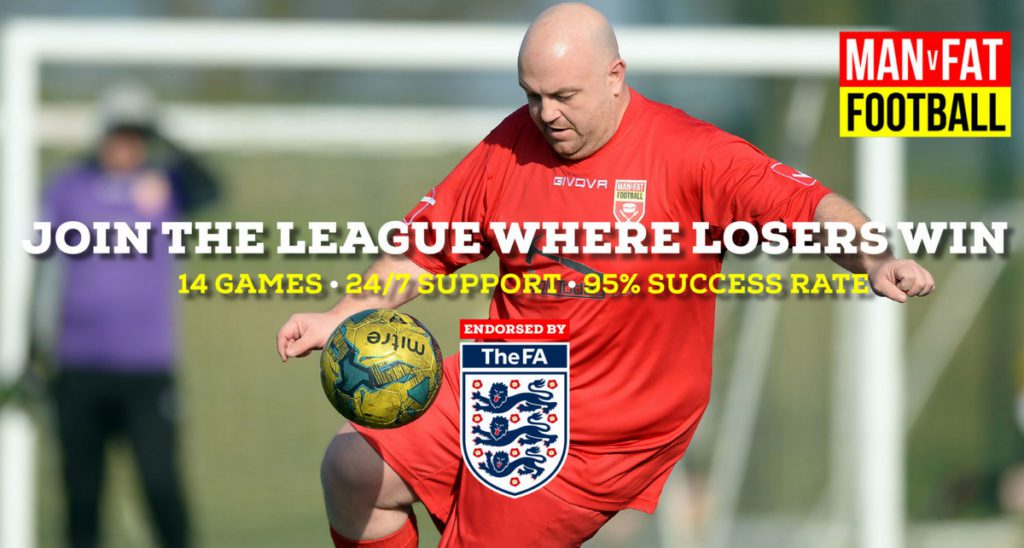 From Andrew working in his shed, we’re now a team of people who are passionate about supporting men. In 2019, we became a part of award-winning healthy lifestyle provider Thrive Tribe’s family of services and we hope to continue to expand, to help as many men as possible win their battle against fat.

If you want to get in touch with us, head to our Contact page for more details.