During one of my many ramblings on the Bridgwater Players WhatsApp group one of the guys asked what the world record was for the longest football match ever played, which set a few cogs turning. After a quick google search someone else came back to say it was 102 hours which is far too long, but the idea was born and quickly evolved into what started out playing as a 12 hour match at a suitable local venue. As both myself and one of our players, @KEV2230 both have links with the local YMCA we decided to see if that was an option both as a venue and as a worthy cause to turn it into a charity event. 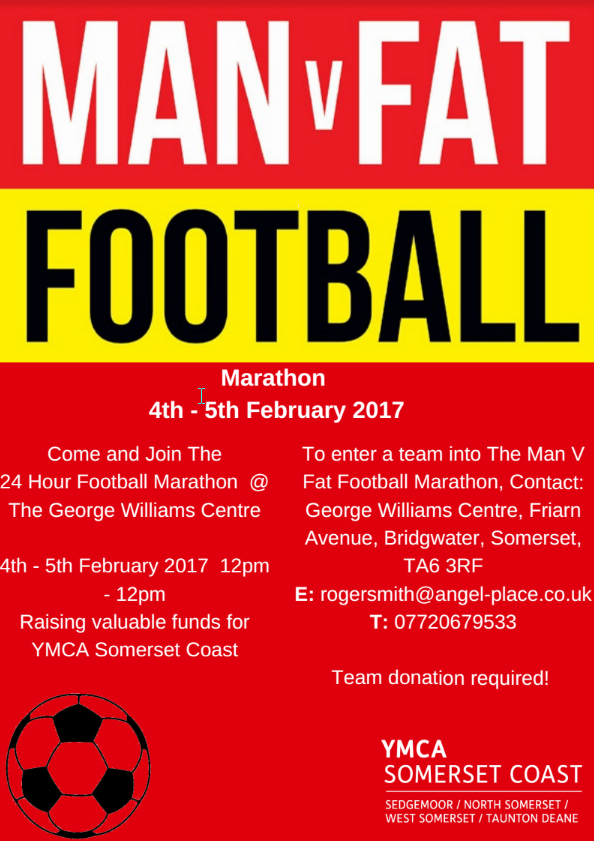 So the idea is that we will play a continuous 24 hour game starting at 12pm on Saturday 4th Feb and finishing at the same time on Sunday 5th with players from the Bridgwater league taking part in shifts of however long they can spare on a rolling subs basis!

In addition to that we have invited local organisations to enter a corporate team to play against the MvF guys in 1 hour long matches that not only have their own individual score but also count as part of the overall 24 hour total, in return for a donation to the YMCA. So far we have about half a dozen lined up with a few more still to be confirmed. You can see from the flyer how you can get involved.

We asked one of the managers from the YMCA to explain why they’re such a worthy cause to support.

“The YMCA, who are hosting this event, offer housing and support to young people suffering from housing crises. The value of the work the YMCA carry out is so important locally and nationally in ensuring that all young persons who find themselves in difficult situations are supported. Our housing facilities offer a range of support and encouragement to help our clients move on to the world of work and self-support. However, there is always a cost. Just £15 will give a young person a room for one night, £30 will buy a starter pack of bedding, toiletries and food for a new resident, and £200 will pay for one week’s training for one of our young apprentices. YMCA Somerset Coast are proud to be involved with this Marathon MAN v FAT Football event, and we thank all those sponsoring the players and the event. ”

As it turns out that the whole YMCA movement was started by a local Bridgwater man who actually served an apprenticeship in Bridgwater, George Williams. With the YMCA building named after him it all just felt right that we did what we can to help one of the more unsung local charities and as I’m involved a 12 hour match just never seemed long enough, hence the 24 hours!

The guys are raising sponsorship and my aim would be to have 40 players raising 500 quid each, meaning that the YMCA would benefit to the tune of 20 grand, plus whatever corporate donations we end up with. There is an online page that people can donate to, as well as that the YMCA have organised a separate projects page form from their normal localgiving page – they have added that anyone donating should add “Man V Fat Football” in the message box to ensure any donations get logged to this event: https://localgiving.org/charity/ymcasomerset/project/manvfat/

We’d love it if you could support the guys on the league, whether that’s with a donation to the event or to get a team together to play in the league. If you know a company in Somerset then give them a nudge for us. Let us know how you’re going to get involved and big respect to all the players doing the 24 hour stints!