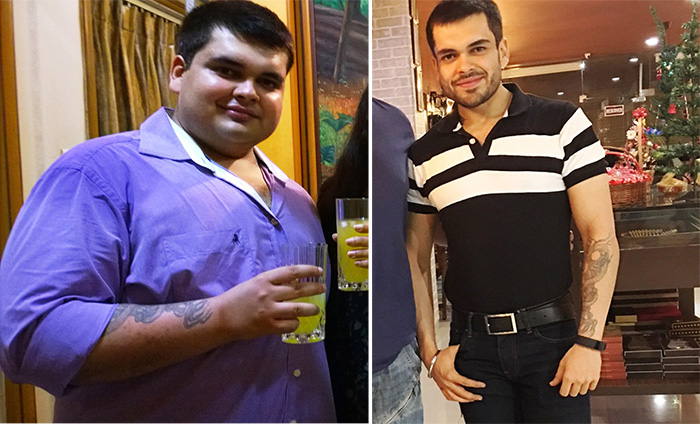 A trap that so many of us fall into is to think that we’re free to eat whatever we like once we’re done losing weight. We’ve been there – it seems almost cruel that as you’ve trimmed down you can’t eat with reckless abandon like your skinny friends seem to (spoiler: they really don’t), but let things slip too much and you’ll be back at square one.

That’s what Amazing Loser Nainesh found after losing weight not once but twice before, both times packing the pounds back on after losing his grip on healthy habits. He was determined that his third attempt would be the final time he lost weight… 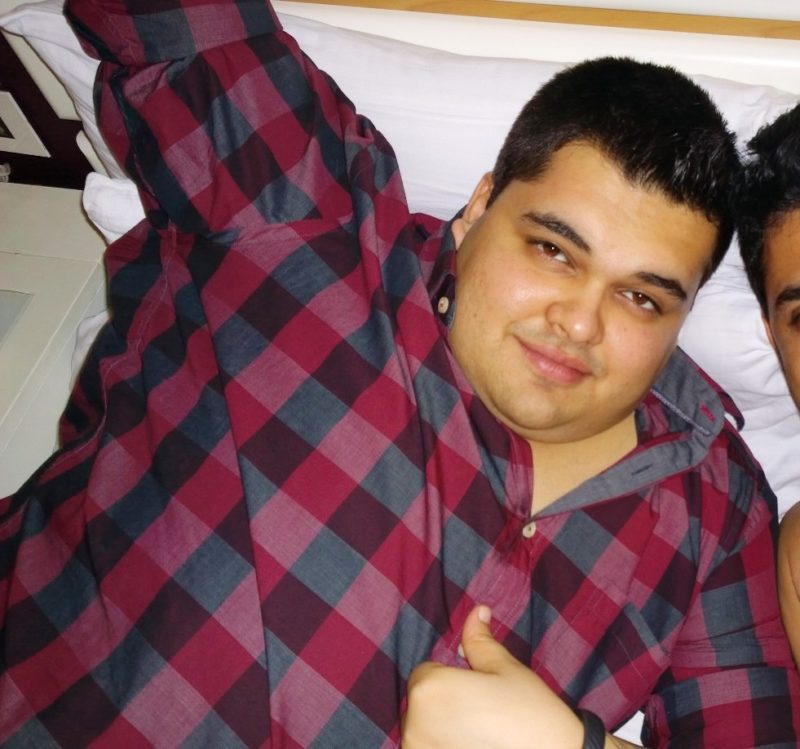 Hailing from a typical Sindhi (Hindu) family means that even from childhood, I was carrying extra weight. The staple diet at home consisted of oil, cheese, butter, ghee (a type of clarified butter) and lots of sugary food meaning that I packed on the pounds.

My sedentary lifestyle made things even worse and I continued to add weight at a constant pace. I was the chubbiest and most introverted kid in my class all throughout my primary and secondary school years.

I was ashamed of the way I looked. I was extremely low on self-esteem and had lost all confidence. I had no energy and encountered a lot of body shaming which added to my lack of confidence.

How did you start to lose weight?

In 2006 I decided to start doing some physical activity. I started going to the gym when I was 238lbs and I kept it up for 16 months. I was so motivated, and along with maintaining a strict diet regime, I managed to get down to 183lbs. I was elated with the results, so much so that over the next few months I completely stopped paying attention to my diet. Unsurprisingly, I started gaining weight again. 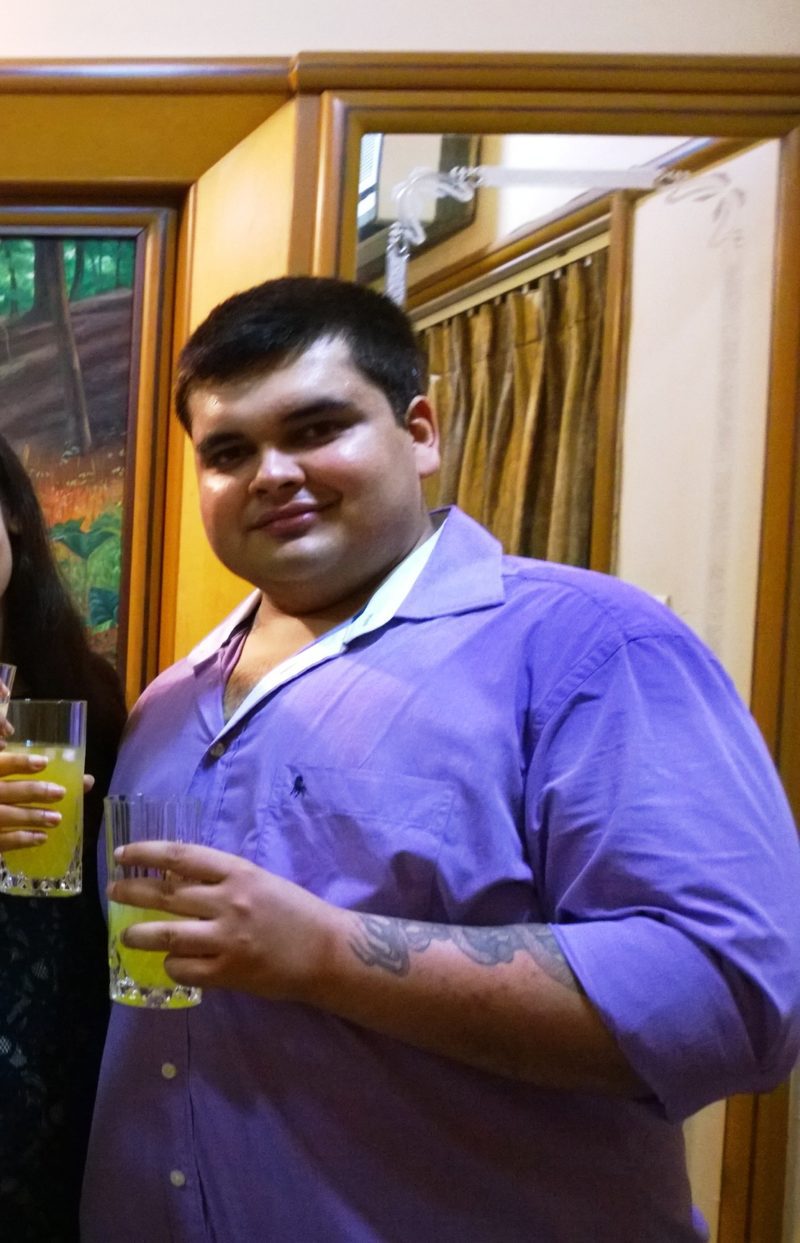 Did you manage to curb the weight gain?

Unfortunately not. Over a period of 3 years, my weight rose to 280lbs. With only a few months left before I started college, I had little time to get back in shape and look presentable. I didn’t want to start a new phase of life like this – I didn’t want meeting new people to be clouded with opinions about my body, as was the case during my school years.

I managed to lose 100lbs by hitting the gym and eating well again and when I started college I had regained some of my confidence. It was going really well, and at 180lbs I felt great. My newfound confidence led to a new relationship which turned out to be bad news for my weight as I got comfortable and gorged on all kinds of food – taking me right back to square one.

A classic yo-yo dieter – we know the feeling. What made you decide to try to make a change again?

In 2014 I weighed 300lbs. I was ashamed of myself but this time it didn’t just affect me – my parents were ashamed of me too. It got to the point where I wasn’t allowed to attend my cousin’s wedding because of the way I looked. I don’t blame them because I’m sure no parent would want people to laugh at their kid for the way he looks, but it still hurt. 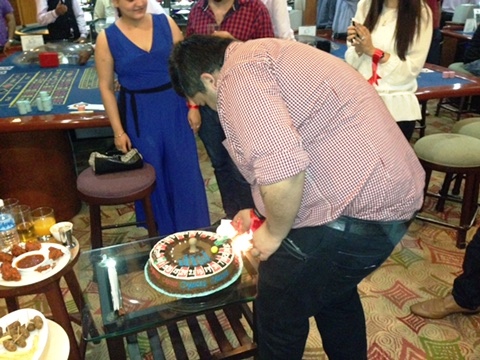 That’s shocking. How did that make you feel?!

It hit me hard. I knew that I was a lazy couch potato who hadn’t been doing any physical activity for years and the extra pounds were weighing me down. I felt so lazy and lethargic. However, not being able to attend the wedding acted as an eye opener and was enough to wake me up.

I started with making small healthy choices. I went for a small walk 5 or 6 days a week and tried to cut back on eating too much cheese, sugar and oil, but at first I didn’t put 100% into it. I really didn’t want to rush things this time as I wanted the results to last forever, so I started bringing in changes slowly but consistently.

Did you learn from your previous attempts to lose weight?

After losing 55lbs in 2006 and then 100lbs in 2009, I had more than enough experience of losing weight so I knew the drill. I made a note of the mistakes I made during my first two attempts as I didn’t want to repeat them again – I wanted this third attempt to be the final, most refined one with the minimum of mistakes.

How did you change your eating habits?

I started off by avoiding things I felt I should completely stay away from and added more foods to my diet which were light on calories but still very satisfying. After a few months of doing this, I started to correct my portions – I broke down what I was eating into 7 or 8 meals a day and also corrected the times I was eating.

I would avoid having any solid meals two hours before my bedtime and made sure that all calorie dense foods were consumed in the morning to leave me feeling satisfied all day. I only ate carb-heavy or rich in fat food before working out so that I had enough energy to exercise and my post-workout meals were high in protein and fibre.

Were you strict with your eating or did you allow yourself some treats?

Sundays were my compulsory cheat days! Bodies need a shock once a week or they get too used to your diet, so I used my Sundays to eat anything and everything I wanted. I would write down all the things I craved from Monday to Saturday and then I would eat them on Sundays. This way I fulfilled all of my food cravings and in return it gave me something to look forward to, so I stayed focused on my goals for the rest of the week. 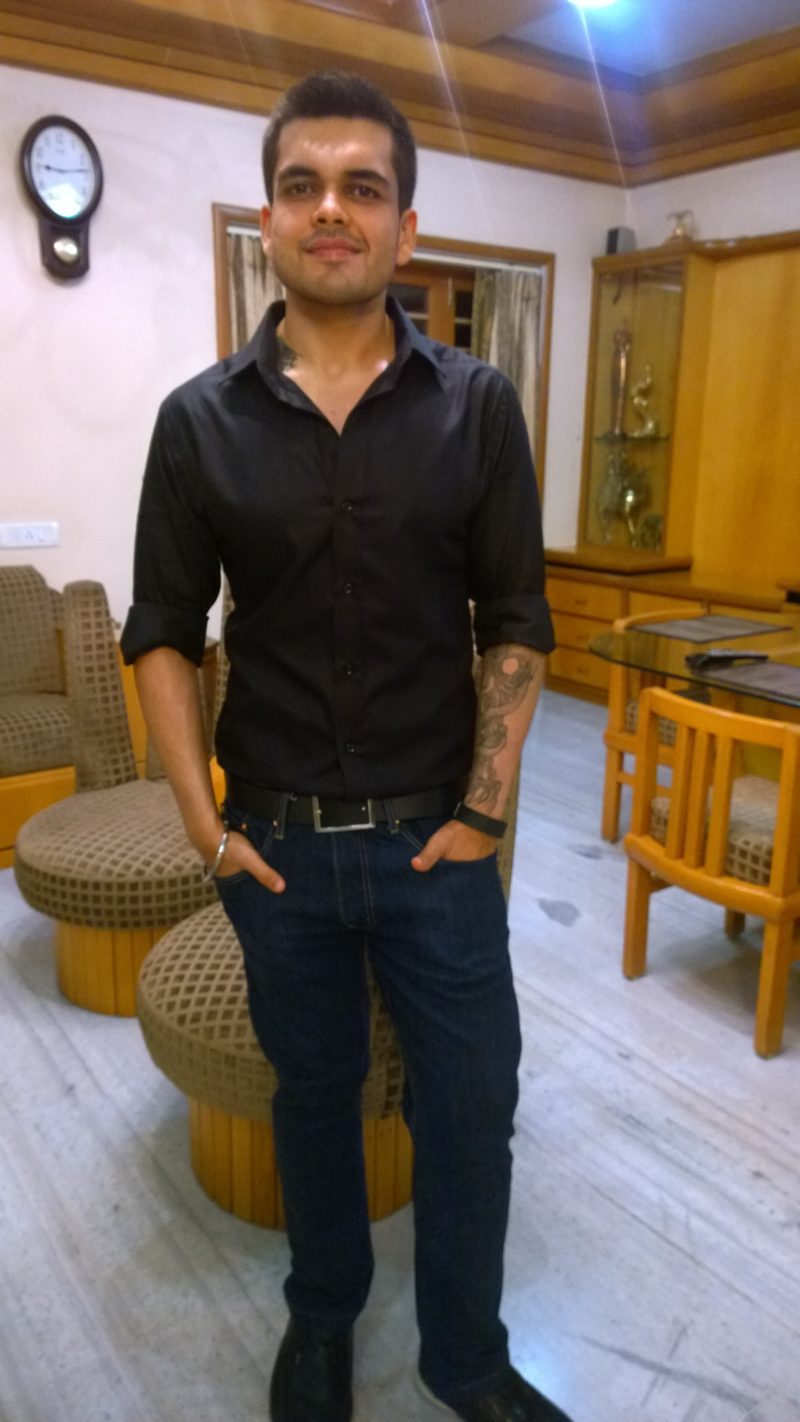 Did your cheat day affect the rest of your week?

After enjoying an extravagant Sunday I would easily gain 3-3.5lbs so on Monday and Tuesday I mostly ate fruit – usually apples, watermelon or papaya, protein shakes and salad with fibre rich veggies, cottage cheese and boiled legumes.

What sort of exercise did you do?

I started off by just walking, doing 40 minutes 5 days a week and gradually increasing the length of my walks. I joined the gym once I felt like I’d developed some stamina – I started with an hour of cardio every day and half an hour of circuit training (light weights but a fast pace, with minimum to no rest between sets) and built it up to doing an hour of circuit training, getting faster and increasing the weights I was using.

When you’re heavier you tend to lose weight really quickly but when you start shedding pounds you tend to lose the pace and the entire process slows down as you get closer and closer to your goal. So you have to push even harder to get the scales moving.

I’ve constantly surprised myself with how hard I can work. When my body started getting in shape, people started noticing the change which gave me a huge high – I felt great hearing all the praise and compliments people were giving me for my hard work. The more people noticed the more effort I put in, I was greedy for compliments! When people started noticing me my hope and motivation skyrocketed just as I was starting to get bored of the same monotonous lifestyle. 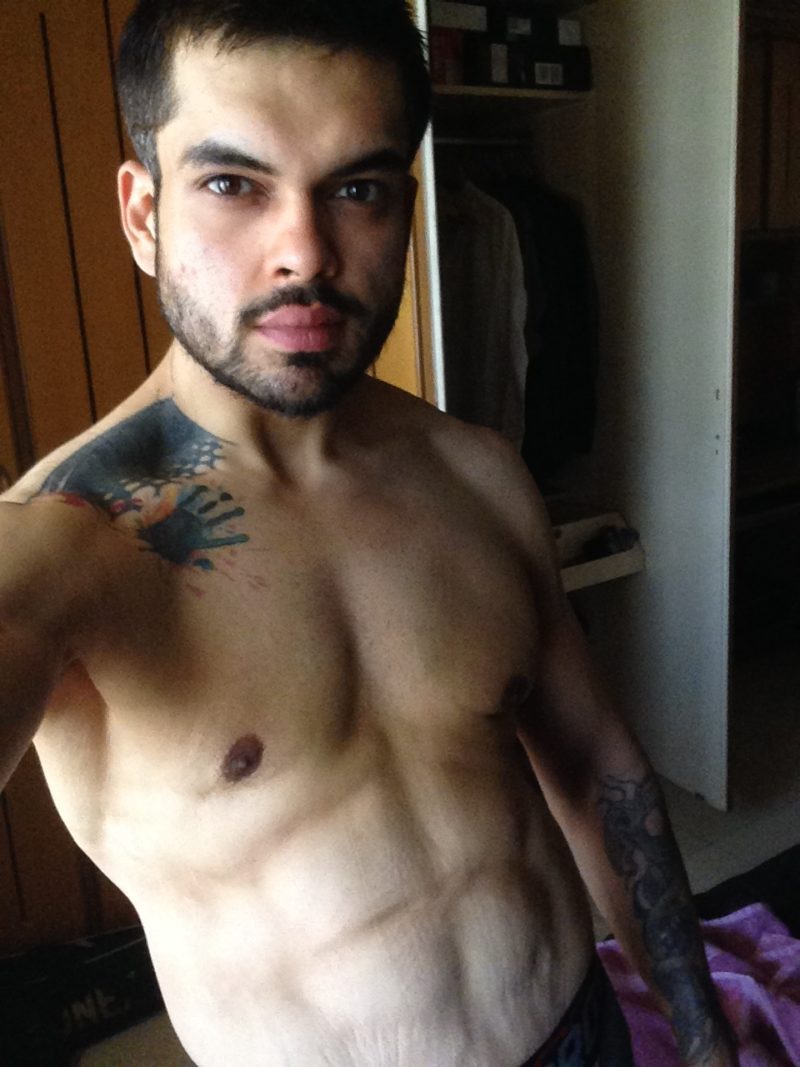 What do other fat men need to know about losing weight?

If I can manage to knock down 158lbs in 24 months with such a slow but consistent approach, anyone can do it! It seems daunting but start slow and start now before it’s too late. 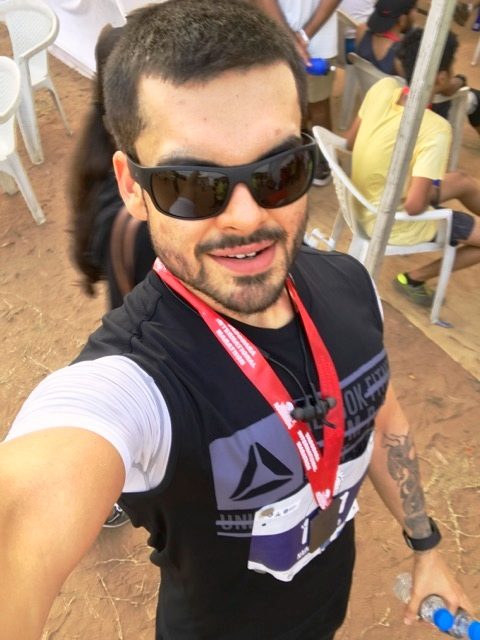 I have been huge all my life, but I’m currently the smallest I’ve ever been. I’m currently 64.5kgs  (142lbs) with a body fat percentage of 11% but my goal is now to reach 100kg (220lbs) by putting on muscle and to maintain a body fat percentage of below 9%. I dream to conquer Mount Everest someday and I will do it soon, it’ll be part 2 of my transformation story and I’m working on it!

Our thanks to Nainesh and don’t forget – If you want to make a change to your life right now – then sign up for one of our free 30 day online weight programmes, the only thing you’ve got to lose is fat…