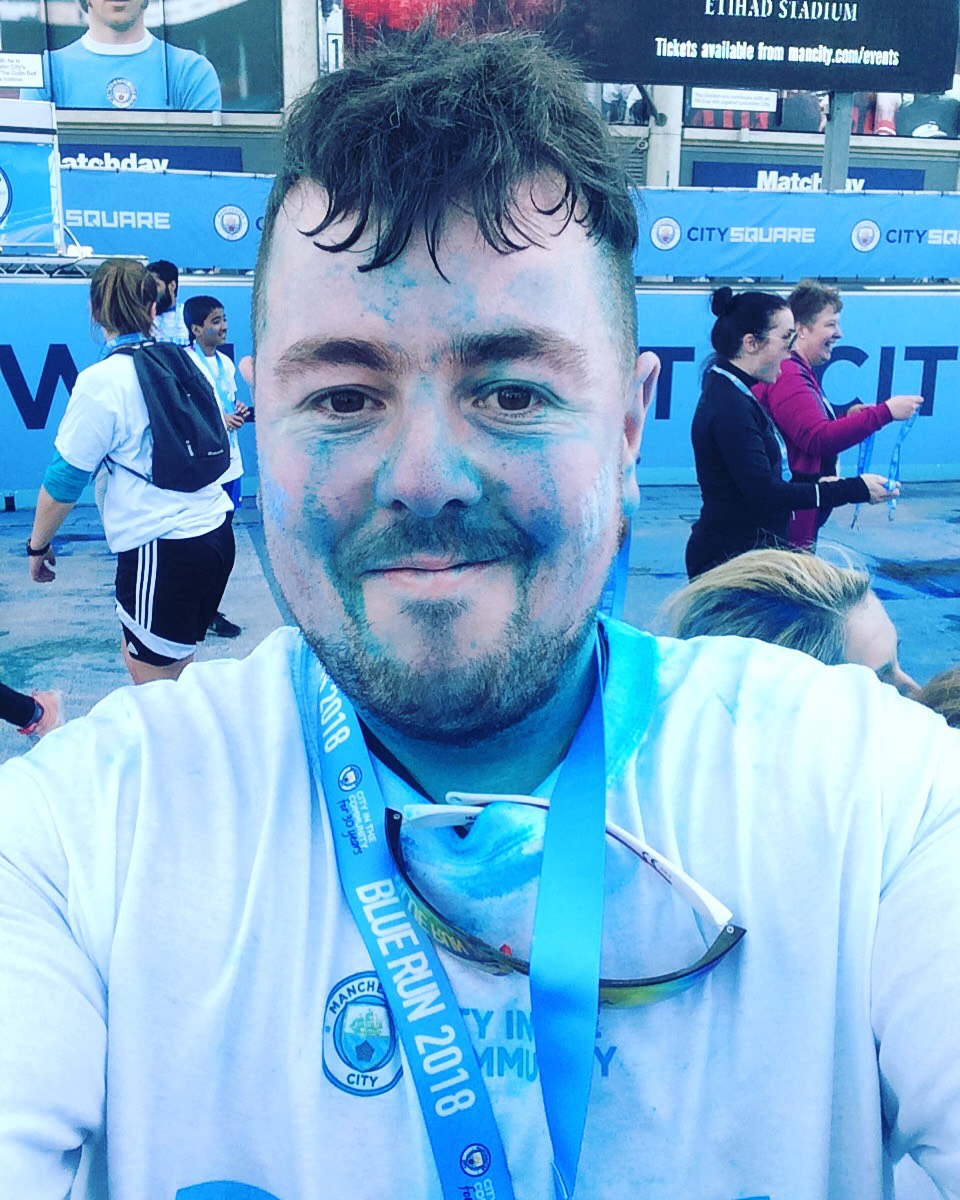 Forget the decorating, don’t worry about the gardening and shut out any other duties you have in mind for this bank holiday weekend, just sit back because this week’s newsround is a cracker. We’ll be telling you which drinks company is restoring the good name of fizzy drinks, how to keep losing the pounds as you get older and two heartwarming stories from the charitable chaps in the North West. 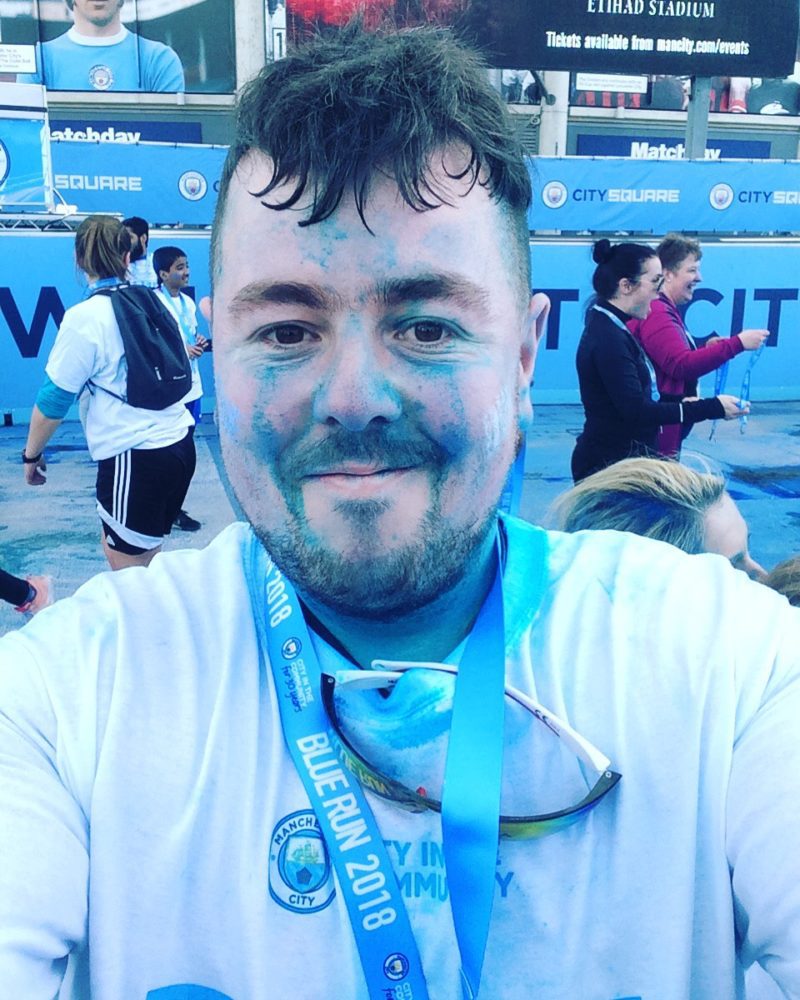 Manchester’s Charitable Marvels
It is a well-known fact that those involved in MAN v FAT Football just love to give, be it through sponsored charity walks, bike rides or runs, you lot are incredible at doing what you can to better the lives of others. This week two players from the Manchester league have taken this to the next level.

Five-kilometre runs are something most of us will be accustomed to already, but last weekend Nathan completed one with a twist. While running around the vicinities of the Etihad Stadium, those who took part were covered head to toe in blue coloured paint. This strange form of exercise may raise a few eyebrows at first, but Nathan assures us that the “fun atmosphere allows you to feel a real sense of achievement”.

Having taken up the challenge as a test of his fitness and a marker to how far he has come since starting to lose weight a year ago, Nathan raised £130 for City in the Community – a charity which provides Manchester locals with opportunities to get involved in sporting activities. 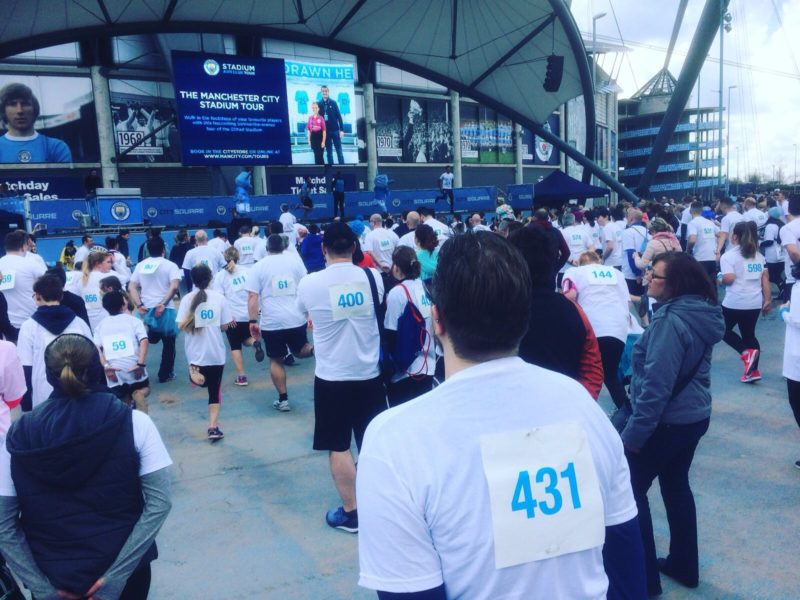 When Josh, who you may recognise from last week’s Amazing Loser, hit his target weight he wanted to do something to celebrate – most people might treat themselves to a curry or maybe an extra glass of wine at the weekend. This was too mundane for Josh, he was looking for something which would push him to the limit and then some.

The first thing to spring to mind was, obviously, a bungee jump over Salford Quays. Yes, that’s right, Josh hurled himself off a crane suspended 160ft in the air, over a gigantic body of water, all in the name of celebration, and of course doing his bit for charity. Having accumulated incredible support from his teammates and family alike, Josh managed to raise £300 for Manchester-based charity The Christie Hospital – a charity that Josh holds very close to his heart. We do not even want to know what Josh has in planned when he smashes his next weight loss target…a full-scale expedition up Mount Everest maybe?

One thing for certain is that these are both brilliant achievements and all of us at MAN v FAT commend both of you for your amazing work.

Food, Food, Glorious Food: If you did not know already, last week marked International Day of Happiness, a day which celebrates the things in life which make you smile. According to a timely survey which polled Brits to find out what made them happiest, three quarters said it was food. Now that is a different type of happy meal. 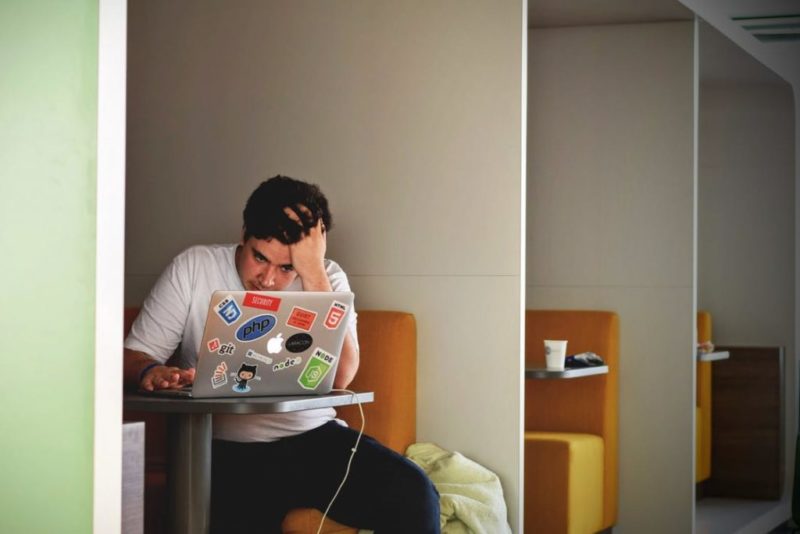 Stop the Stigma: It really is great how opinions have changed on mental health, but by no means are we all the way there, with research suggesting that Brits feel most vulnerable about opening up while in the workplace. With one in four of 18 to 24-year olds feeling like they would be susceptible to harassment should they speak openly about their mental health problems, it’s a real shame when so much good is being done around opening up about mental health. 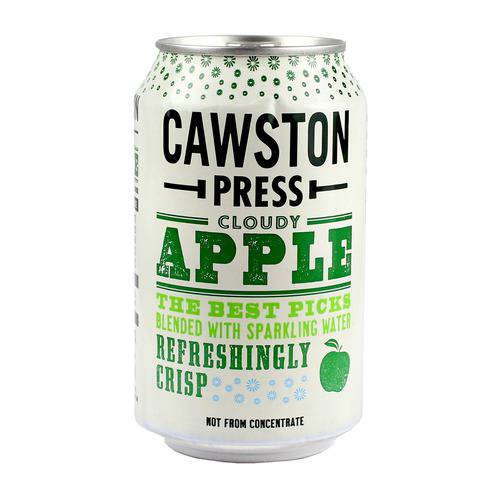 Cawston Press are a drinks company that are reinventing the ways in which we consume fizzy drinks; attempting to tackle the impending ‘sugar tax’ levy, they’ve brilliantly come up with a product which incorporates the best bits of sweet tasting fizzy-pop, while keeping the calories down. By revolutionising the way in which they produce their drinks, the new recipes come in at an impressive 31% less sugar, with the company pledging to cut a staggering 600 tonnes of sugar from their drinks this year. The new Cawston Press range includes a plethora of mouthwatering flavours, which are sure to quench your thirst in the upcoming summer months; Sparkling Rhubarb, Cloudy Apple, Elderflower Lemonade and Ginger beer will all be available at a price of £3.99 for four 330ml cans.

“One thing you have to do is be honest with yourself and if you are finding things hard at the minute then start tracking your intake completely accurately and we can have a look through if things don’t turn the corner back towards a loss this week. Look at portion control and remember to count every component of your meal e.g. don’t forget the milk/sugar etc when you log your breakfast.” – @Smithr82 commenting on how important it is to be transparent about what you put into your body.