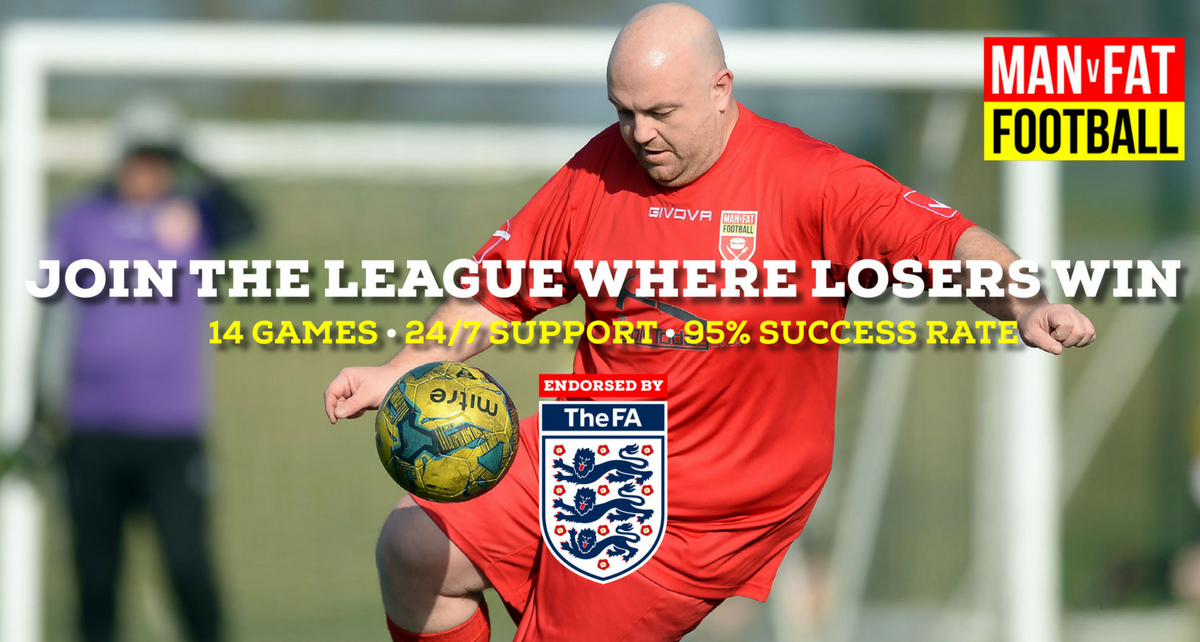 Crack open the (low-cal) beer! Over at MAN v FAT Football, we’re celebrating our players losing a combined total of more than 34 TONS since the first league was launched just over a year ago. That’s 4 elephants, or 45 cows, or 200,000 hamsters. What do you mean you don’t measure your weight loss in animals?!

The 14-week 6-a-side football leagues, which are officially endorsed by the FA, are exclusively for overweight and obese men who want to lose weight. The games start with a weigh-in before kick-off of a 30 minute game of six-a-side football.

The weigh-ins aren’t just to track individual weight loss, losses count on the pitch too: extra goal bonuses are added to the match scores depending on weight lost by the teams, so losing weight and winning games becomes a real team effort. This combination is so successful that a whopping 95% of players successfully lose weight.

Andrew Shanahan, who founded MAN v FAT Football, said: “It’s a phenomenal achievement. We’ve got more than 3,000 players now in 25 leagues across the UK and they should be very proud of their achievement because what we’re celebrating is the work they’ve done getting back into football, losing weight and getting fitter, all of which has seen them hit this incredible target of losing over 30 tons.”

“When we set up the leagues in January 2016 I had no idea how big it would become. All I knew was that the program was based on what I wanted a weight loss scheme to be. I’ve struggled with my weight in the past, and what I wanted to do was to provide a support scheme that I wished was around when I was losing weight. I hope that this news shows men that it is possible that they can lose weight and that there are schemes out there that will support them all the way.”

Andy Dyke, the National Participation Manager of the FA said: “Losing over 30 tons of weight loss is a fantastic achievement and is testament to the hard work and dedication shown both by the MAN v FAT Football team in producing such high quality leagues and the individual participants whose lives are being so positively impacted by this scheme.”

“At The FA we truly believe that football is for all and this programme is a fantastic representation of that. Not only that but demonstrating that football’s innate enjoyment is combined with fantastic health benefits and the ability to bring like-minded groups of people together. We look forward to seeing the continued growth of the MAN v FAT Football programme and the next 30 tons of weight loss being achieved.”

Ben Plummer, who has lost over five stone since joining MAN v FAT Football in May 2016, said: “I have tried various diets and weight loss plans and gym memberships in the past however, none of them really worked for me. Most weight loss plans and groups feel like they are very much geared towards women and they can be awkward and uncomfortable for men. Personally, I have always found gyms a little bit intimidating as well as being quite boring! I enjoyed competitive team sports when I was younger and MAN v FAT Football has proven to be a great way to get back in to playing team sports, getting fitter and losing weight.”

Congratulations to all the players who have lost weight with us – we’re thrilled that MAN v FAT Football has helped so many men make a difference to their lives, long may it continue!

If you want to join your local MAN v FAT Football league, head to www.manvfatfootball.org to find your nearest one on our handy map, including those that are run for free thanks to sponsorship from local authorities and housing associations.