Did you know that a football weighs 1lb? 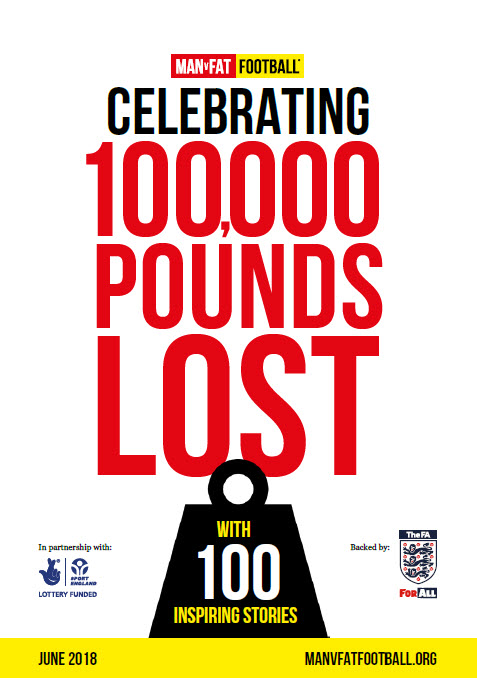 There’s something cosmically apt about this statistic, as today – 5th June 2018 – we celebrate the fact that MAN v FAT Footballers have lost more than 100,000 lbs. In case you can’t do quick maths then that works out as MAN v FAT Footballers losing the equivalent of 100,000 footballs. As the person who pays the bill for all of the MAN v FAT footballs that go over fences across Britain I’m fairly sure we’ve lost 100,000 balls too.

It almost defies belief that we’re at this point, given that it was just 29 months ago that MAN v FAT Football started. To think that in just over two years we’ve had more than 8,000 men join the leagues and over 60 leagues have launched across the country. We’ve been to St George’s Park twice. We’ve played under the famous arch at Wembley. We’ve had leagues funded by Sport England, local authorities, housing associations and companies across Britain. We’ve got our first league launching in Australia in September. It’s utterly bewildering.

To celebrate the arrival of this milestone we have two gifts for MAN v FAT Footballers.

The first is that we’ve put together a short book that you can get your copy of simply by clicking on the link here, or clicking on the image to the right. We’ve also created a new section of the website where we have 100 case studies of players from around the country who have lost weight and we will be adding to this as we go. If you’d like to share your story then simply email us.

The second gift is the announcement that is on the final page of the Celebrating 100,000 Pounds Lost book. We think that it’s going to be a really significant step in the development of the programme and we are thrilled that we will be bringing this new feature to MAN v FAT Footballers completely for free. Download the book and you can see what I’m on about.

Finally, I’d like to echo the words of Steve Day, the FA’s Head of Participation. In his introduction to the book he wrote:

Reaching 100,000lbs of weight lost is already an incredible achievement and we are delighted to be able to endorse the work of MAN v FAT Football. Despite this success the programme still retains huge potential and we look forward to seeing it continue to grow in the coming seasons and ever more innovative features being added to programme delivery.

That sums it up for me. I’m so pleased to celebrate with the players today and for all of the men (and their partners and families) who have made significant changes to their lives as a result of signing up with MAN v FAT Football. But more than that I’m driven by how far we can – and must – take this.

Let’s borrow some of the stats from our friends at the Men’s Health Forum:

Beyond the horrific statistical picture I know from bitter personal experience just how much my weight robbed me of in my life. Confidence. Opportunities. Happiness. If any of the 20.4 million men in the UK are feeling the same way then I want us to be able to offer them the opportunity of support, and the opportunity to have someone cheer them on as they start their own battle against fat.