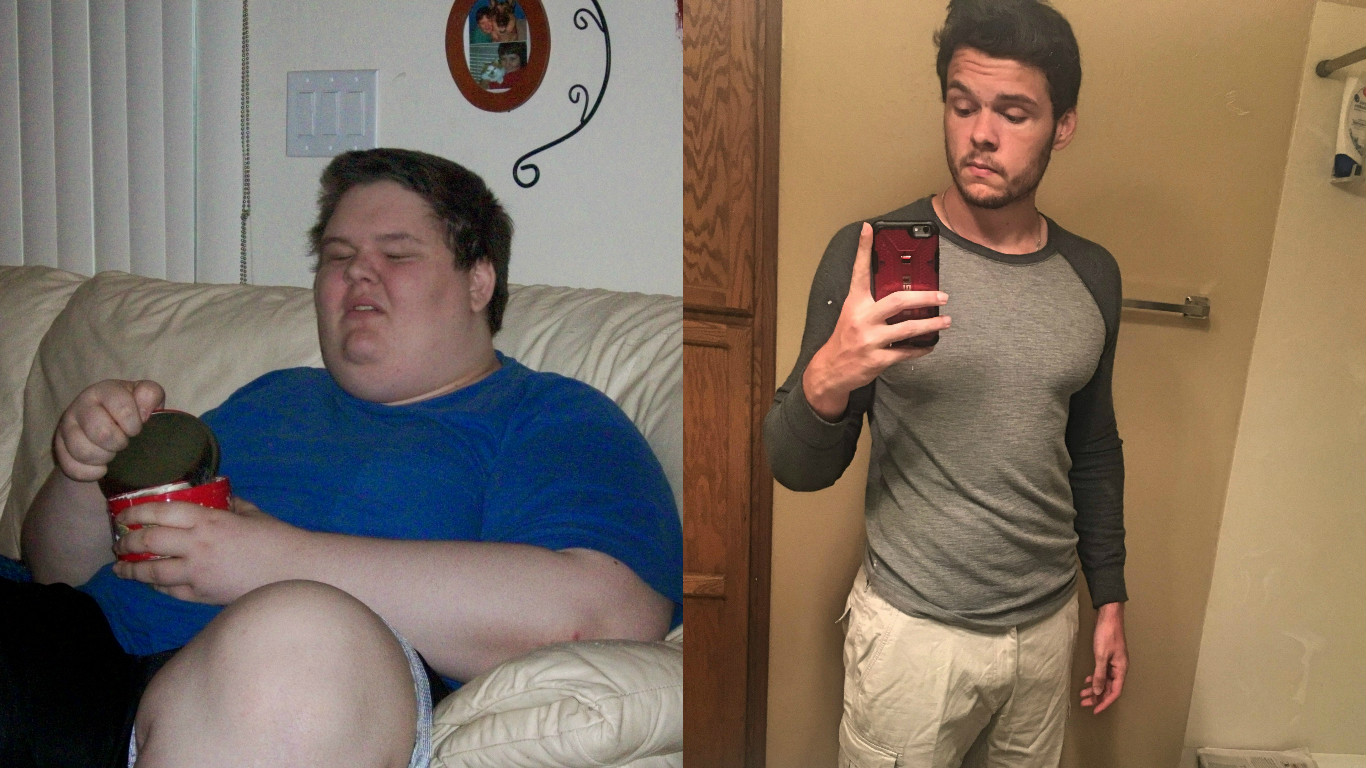 In our quest to find the world’s most amazing weight loss achievements, we often look to other social channels that are as valid, if not as awesome as our own. It was on one such visit that we encountered a fellow with the handle LiftOrDie22 whose utter transformation stopped us in our tracks even before we saw the numbers of his frankly staggering weight loss. He also turned out to be a total mensch. No surprise then, that we’re not the only ones keen to bend his ear and if he looks familiar, it may be a case of ‘as seen on TV’… Why did you get to the position where you needed to lose that weight?
I wasn’t always big, growing up I always played sports and was very active, but then right around the end of junior high we had moved away from all my friends and everything I knew. I was the new kid and I didn’t enjoy it or fit in, so I would go to class and sit at home everyday. No matter how many times people told me I needed to change I would just blow them off and ignore it. I honestly never realized I was getting as big as I did, I was lying to myself for so many years.

What made you decide to change?
I remember it like it was yesterday, one my very close cousins got diagnosed with cancer at the age of 14 and within a year he had lost his life. It really hit me hard -this wasn’t just one of your cousins you see every few years, this was a cousin that I considered a brother. He was just your typical kid, he loved life and he was very active. Once he had lost his battle I called my mom the same day and told her I wanted to change – here I was, 17 years old and doing absolutely nothing with my life and he was gone. I felt ashamed and I owed it to him to live a full life and ever since then I’ve never stopped trying to make him proud. How did you do it and what made it different from the times before?
At the start I was very lucky and a trainer at the gym I went to decided to help me free of charge – he showed me ropes and made it more comfortable. Still to this day I think without his help I would be dead. I know he hates when I give him any credit, but he deserves so much. He set up a plan for me and I did as much as I could, which needless to say wasn’t a lot at all. I changed my eating habits and worked out once or twice a week, until I could slowly add more weight and more days into my routine. It was unbelievably hard and I did question if it was worth it, multiple times, but I never quit. Soon enough I was going to the gym five days a week, doing weights Monday, Wednesday and Friday and then HIIT cardio Tuesday and Thursday. I honestly had never tried to lose weight before. I really just never cared and refused to believe everyone when they tried to point out that I needed to change.

What did you eat over the course of an average day?
Before, I ate whatever I could get my hands on. Whether it was full pizzas or just bags of chips and cases of soda. Then, once I started working out and trying to make a change, I ate a lot of chicken and rice (SO MUCH) and salads. My post-workout go to meal for almost a year straight was chicken and quinoa mixed with some hot sauce and a protein shake. It wasn’t glorious but it got the job done and I was dedicated to making a change. Still to this day I eat mostly chicken, high protein meats and a lot of greens. The absolute biggest change I ever made and the first thing I always recommend to people with questions is to stop drinking soda – just stop. Soda is empty calories with zero nutritional value. Liquid calories are the worst because you can hit your daily intake so quick and you wont even feel full. I personally quit soda cold turkey and can count the number of times I’ve had it in the past six years on one hand.

There were so many plateaus. I lost motivation multiple times and would take month-long breaks every year it felt like. The key was that I never quit though. Every time I took a break I would come back even more dedicated and work even harder at the gym. A healthy lifestyle is a life long commitment, not a short term fix. As long as you stick with it and never fully quit then you will take back control of your life, I promise. How has life changed now you’ve lost the weight?
I don’t even know where to begin! Life has become amazing. I just recently returned home from a two month solo backpack trip all around Europe where I visited fifteen different countries, I met some of the most amazing people ever and I had the absolute time of my life. I’ve also gained an insane amount of self confidence that I never thought I’d have. Now I walk into a room with my head held high and own it, I don’t hide away in the corner. I know I look amazing and I feel amazing. I will never go back to doubting myself and doubting my worth.

Who helped you the most and who got in the way?
No doubt my mother has been my biggest supporter and motivator. She has been there every step of the way and I’m so blessed to have such a wonderful mother. What surprised you about losing weight?
Probably the biggest surprise has been with women, It’s been a total shock the amount of attention I get nowadays. Needless to say I never got any when I was overweight and depressed. It’s been a double-edged sword though, no one can prepare you for heartbreak and just like every other human I’ve already experienced my share of it by multiple women… which is OK! We have to experience the tough times to become stronger and learn! I learn something new every time and if there’s one thing I’ve learned along my journey is that there’s a huge difference between “want” and “need”. Trust me when I tell you that we don’t “NEED” anyone to change our life and live it to our fullest potential.

If you could go back to the person you were at your heaviest – what would you say to him?
Get off your ass and stop lying to yourself – you aren’t “ok”. You’re obese and gonna die. These should be the prime years of your life and you’re wasting them inside on your butt.

You’re President for the day, what one law do you bring in to help others who are obese?
I would make it mandatory for the parents that have a constant trend of obesity in their family to attend child obesity awareness groups to learn how to fight it. There is no worse feeling in the world then seeing an overweight child and knowing it’s not his fault but his parents aren’t educated enough on the subject to stop it.

1. Its gonna be unbelievably hard and you’ll want to quit, but if you don’t I promise you it’ll be worth it!
2. Stop drinking soda, period! Replace it with tea.
3. We only get one life. It’s our job to live it as fully as possible. Every day we should wake up with a smile and strive for progress, never perfection. That’s the beauty of life, no one’s perfect and no one ever will be. We are all unique and beautiful in our own way.

What else should we know about your weight loss story?
I was cast for a television show that aired on TLC this year called “SkinTight”
My episode is number 3 if you would like to see the aftermath of massive weightloss and hear more about my journey! Our thanks to Jeffery for sharing his story!