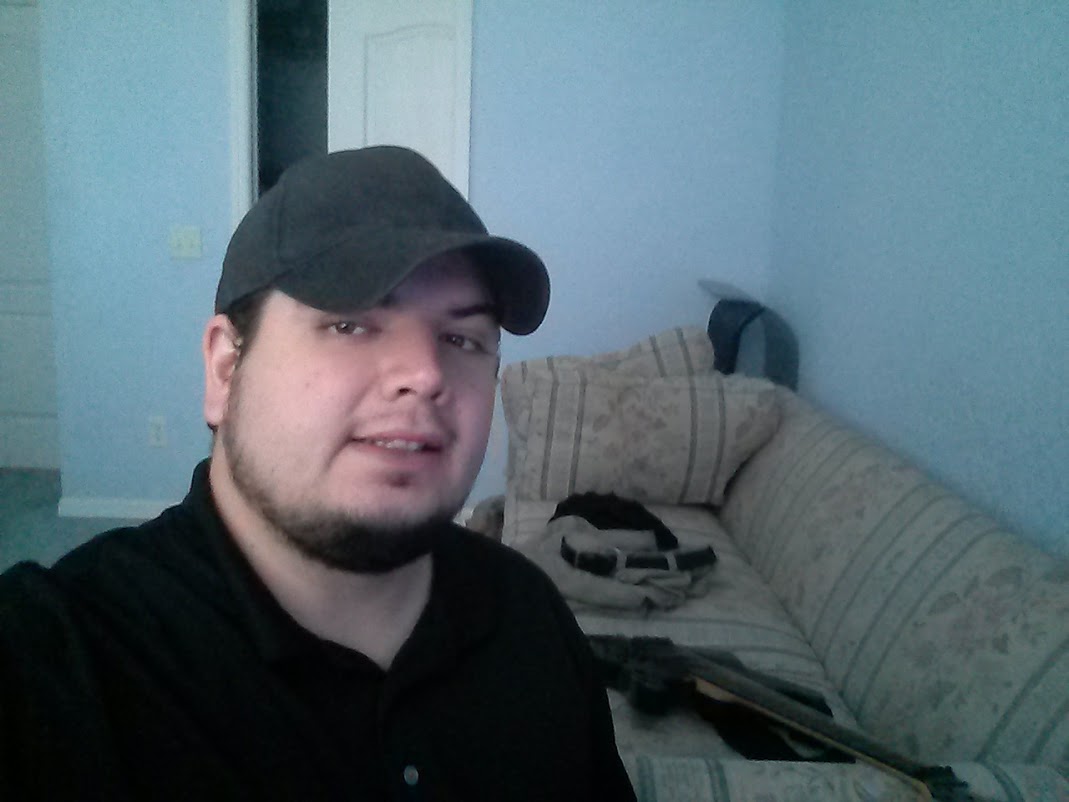 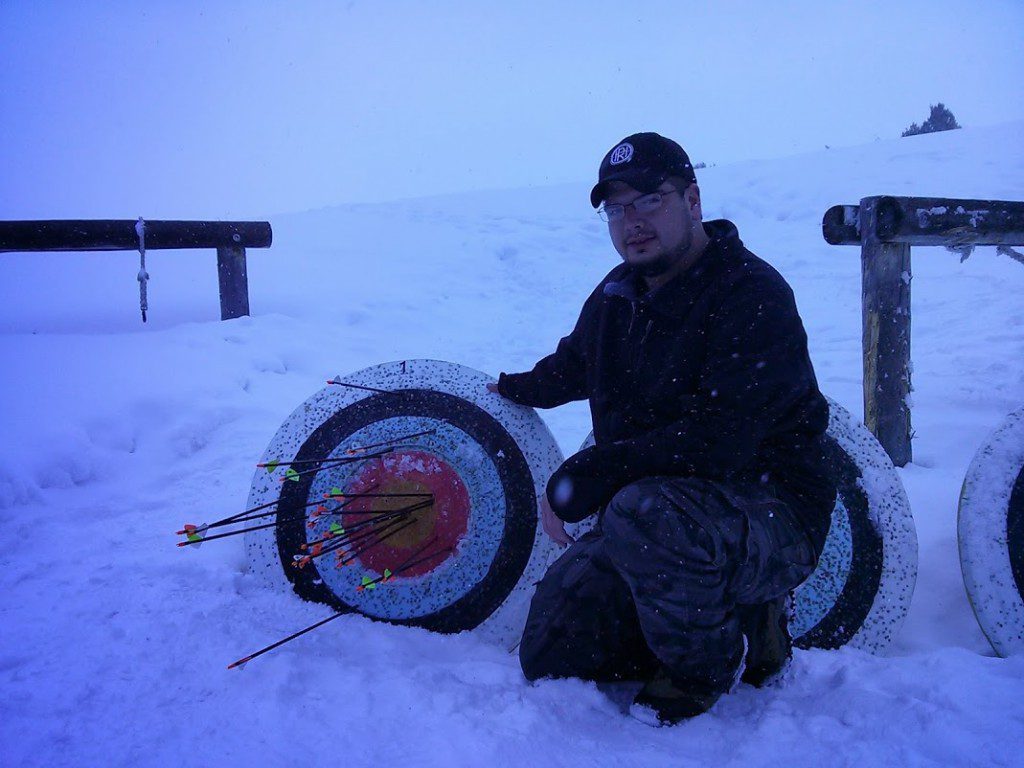 In your story there were a lot of issues piled up on top of one another. Let’s talk about the anxiety first – how did that start?

My anxiety stemmed from my childhood. There were a few times in my early years that basically traumatised me because of teachers calling me out on things. One example is when I passed a note to a girl in 5th grade with $0.50 cents in it so that she could buy a snack during the break time. The teacher was asking who wrote it in front of everyone, she then said, “I recognise this handwriting” and instantly said: “Dan, can I see you outside?”, and everyone in the class pointed and started laughing. She called my parents and explained it to them as if I were trying to buy a prostitute!

It got worse as I got in to high school, as I was a computer nerd through and through, never had luck with girls and so on. Until that is, I discovered alcohol at 17. All of those feelings of doubt, the reservations, the nervousness, it all disappeared. With alcohol I could approach a girl as if I was the ultimate alpha, it was amazing. So what did I do throughout all of my twenties? I stayed drunk. I was able to hit on and pickup girls at the bar, even when I was 309lbs, the alcohol gave me a confidence that I never knew existed. 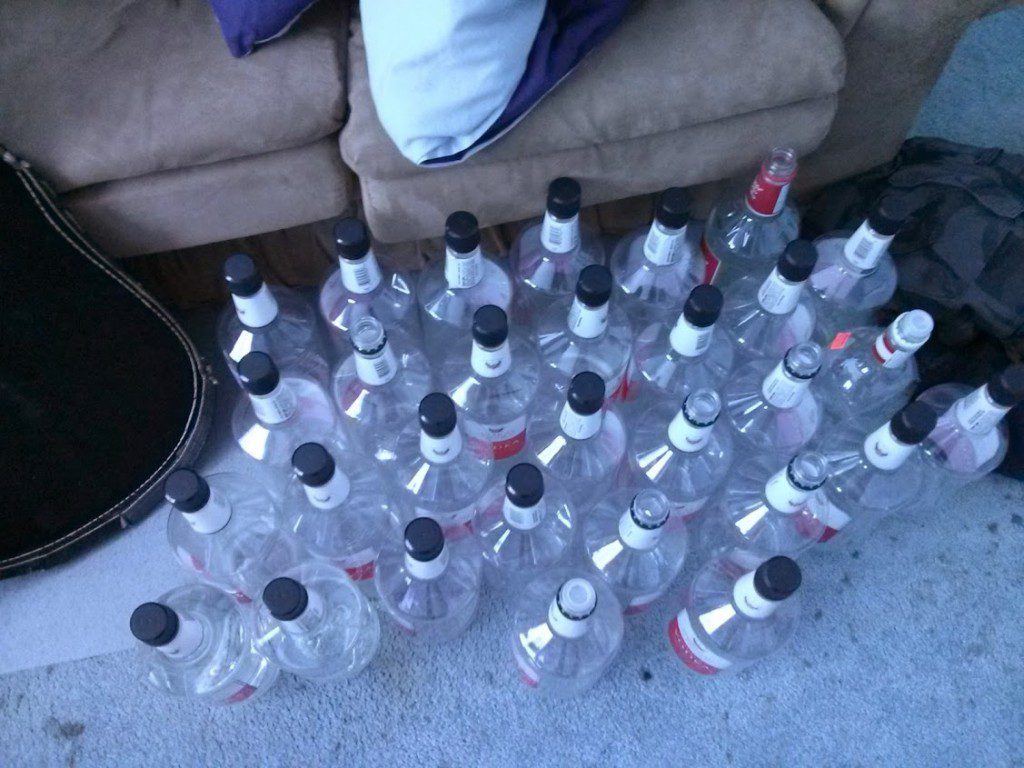 What was your alcohol intake like at its peak?

I spent six or seven years drinking nearly two litres of vodka per day, which equated to about 4-5,000 calories just in alcohol. That did not even include all the Gatorade I would mix it with, or any food I ate on top of that.

It was worse than a double-edged sword though, because not only did the drinking make me huge and give me health issues, when I finally got off it, it made my original anxiety so much worse. Some of the terrible long-term effects and symptoms of alcoholism are extremely increased anxiety. I now have to be on medication to simply make a presentation at work, I freak out if my phone rings and I don’t know who it is that is calling, hell, even if I do know who it is. 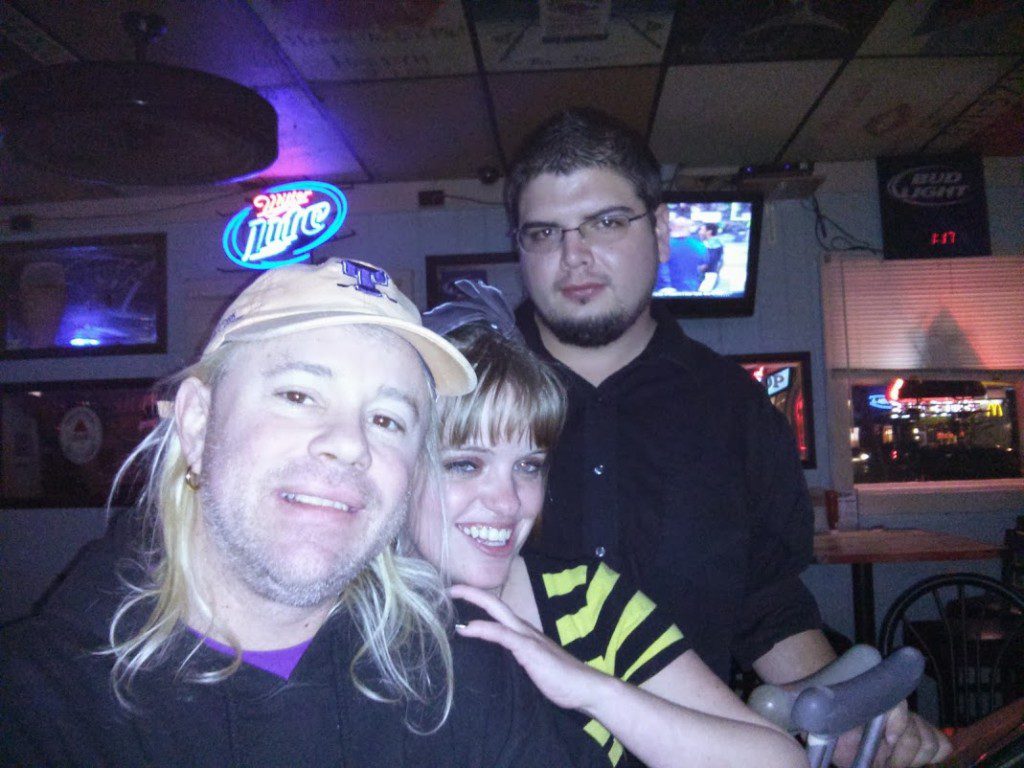 One of the things I find amazing about your story is that you say the bar where you did most of your drinking became a really supportive place for you while you were losing weight and stopping drinking?

Even when I was not drinking, I would still go to the bar and drink water and hang out with them because they would always tell me how proud they were of me, how awesome I looked, and encourage me to keep it up. It was an awesome feeling and helped keep me going. 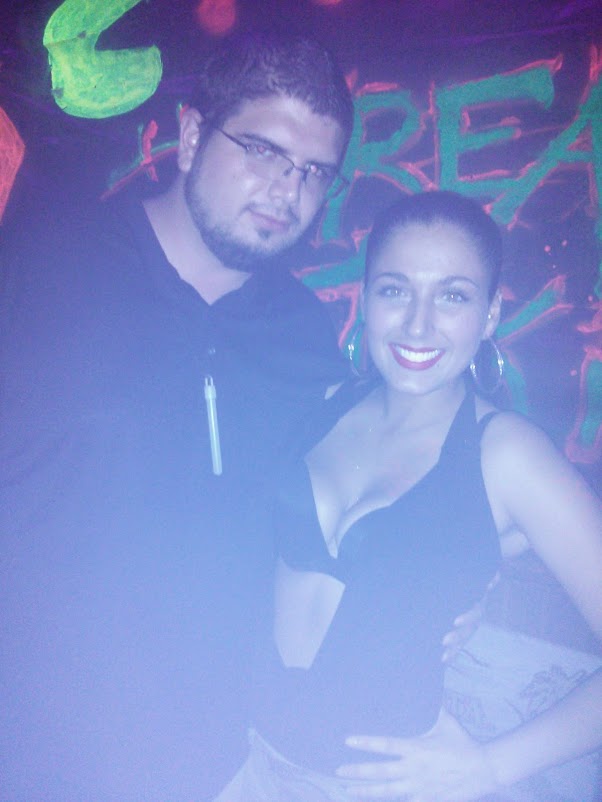 So I guess when you’ve got several issues that are all interlinked it’s like unravelling a ball of twine – how did you start?

I basically forced myself to get fired from my job! I then checked in to a local facility to help with my alcohol problem, as if I had tried to quit on my own, I could have risked dying. Once I made it out, I was determined to get rid of the weight. I tried running right off the bat, but the alcohol withdrawal symptoms made it difficult, especially the hallucinations while I was trying to run at night, that would get pretty scary.

I figured I would give my body some time to recover, so I just tried to stick to a fairly good diet, and boy did it help. I lost about 85lbs in four months, a good portion of that was from cutting out the alcohol but the majority was because I was logging things on My Fitness Pal and trying to stick to around 1,500 calories per day. 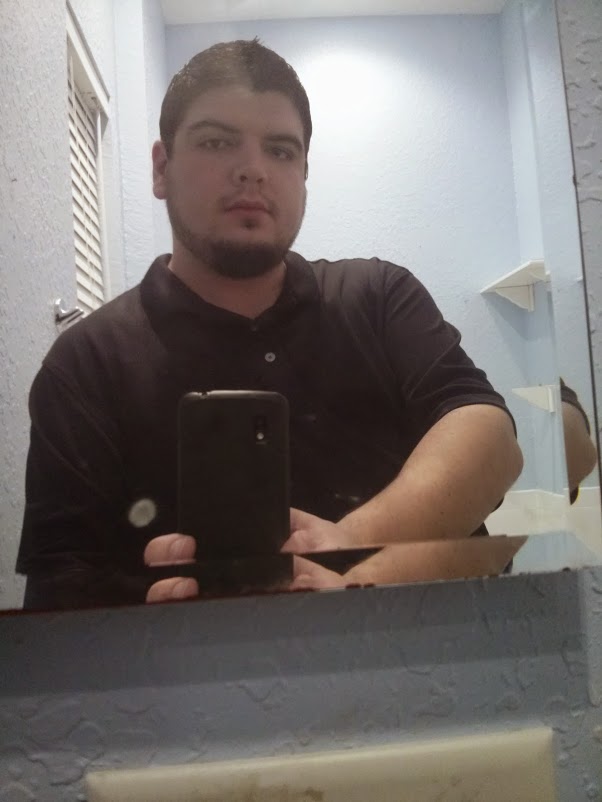 What sort of things were you eating?

I mainly focus on leaner meats – chicken of course and lots of it, fish, turkey bacon, deli meats, and hardboiled egg whites. I occasionally throw in salads and for lunch I typically get a chicken Caesar wrap. If I go out to eat I will get a chicken bowl with light rice, lettuce, just a tiny bit of cheese, and a spoon of sour cream. The biggest thing is to stay away as much as you can from cream-based foods, but you certainly can have those things as long as you are keeping track of your calories.

Your first attempts at exercise had been complicated by hallucinations, so how did you get back into it?

Once I got down to around 230 lbs, I started walking one day. Then the next day I began to try and mix in a light jog, each night I tried to make the jog longer and more frequent. In the walking, day in and day out, I would try and add more and more jogging, which progressed to running, then sprinting. The big difference is that I was extremely determined. Once I started walking, sorted my diet, was getting lots of sleep and plenty of water it made a big change. Within about two months I was down from 230 to 195lbs. I then started to add in weight-lifting every other day and have never in my life felt as good as I do today. 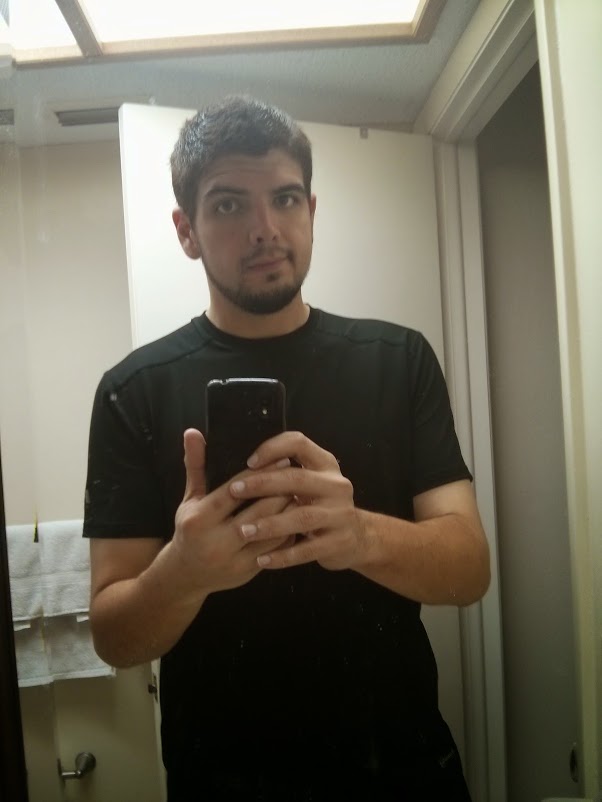 Was it all plain-sailing?

It was tough at first, no one likes the idea of changing your routine you are comfortable with, but I can sure tell you, you will be glad you did. I dreaded even the thought of exercise initially, but if you start out slow, and just add a little more each day, push yourself just a little harder now and then and actually stick to a diet, once you start seeing the weight come off, you become addicted! I went from hating running, to not being able to wait until I got home from work to try and see if I could beat my mile time from the day before.

One of the challenges you faced was when you got a new girlfriend after you’d been dieting for a while, what happened there?

I had not drunk a drop of alcohol for about six to eight months before I met my (now ex-) girlfriend, but then I started again to drink with her, which became more and more often. That made me not work out or run any more, and then I started to eat terrible food again. I had to get out of that situation and get myself back on track. I need someone in my life who shares my need for primarily clean living and keeping active so I do not slip back in to it. 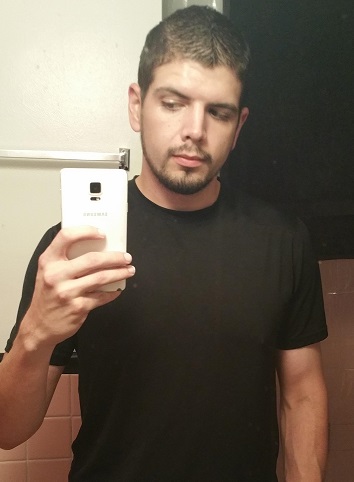 You’ve been in a situation where you’ve experienced alcoholism and obesity – what do you think those two conditions share? Are there similarities?

Food addiction, as with many other addictions, can completely alter a person’s life in serious ways. When you are mentally addicted to something, it may as well be physical as well. I had played World of Warcraft at times for upwards of 12-16 hours per day when I was between jobs, every single day, which made me neglect many other aspects of my life, including family. It caused a huge issue with my baby’s mother and is a contributing factor to why we are not together anymore. Addiction of any kind is difficult, but they are all something that can be overcome, if though, and only if, you actually want to. 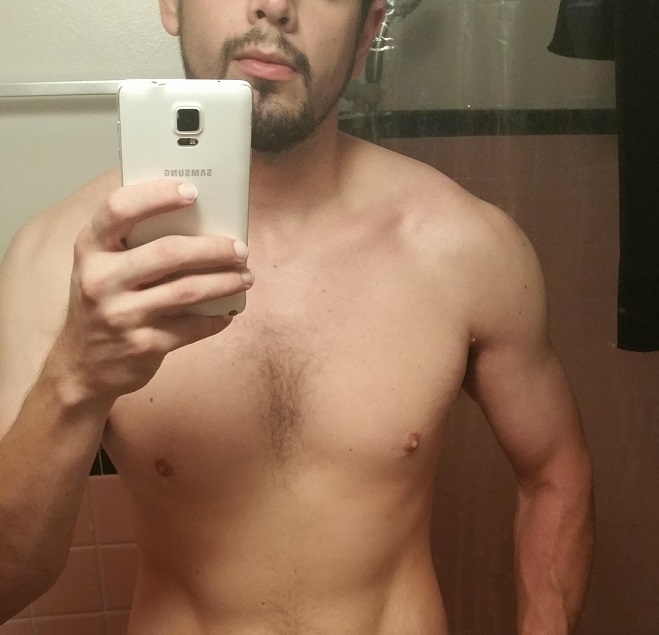 I know that confidence can be an issue for so many men with regard to weight. It just seems to disappear when you’re not happy with how you look – how have you found your anxiety has changed as you’ve lost weight?

This is a difficult one to answer, because everyone is so different. There are people out there who are 400+lbs with more confidence than anyone else I ever met, and then there are people who have 6% body fat and are shredded like a fresh salad yet have no confidence.

In my weight loss journey, has my confidence gone up? Yes and no. I had way more confidence when I was drinking, but it was not real. Can I walk in to a room and feel confident that I look good in my new clothes that actually fit and not have to worry that people are staring at me thinking, “Eww, gross.” – yes, I can.

Though having anxiety limits what I am able to do with that confident feeling, they kind of counter-act each other. That is just something I personally need to work on. I can tell you this though – each and every pound that comes off, the smaller and smaller my stomach, arms, legs, and ass became, the scale keeps tipping in more and more in my favour. 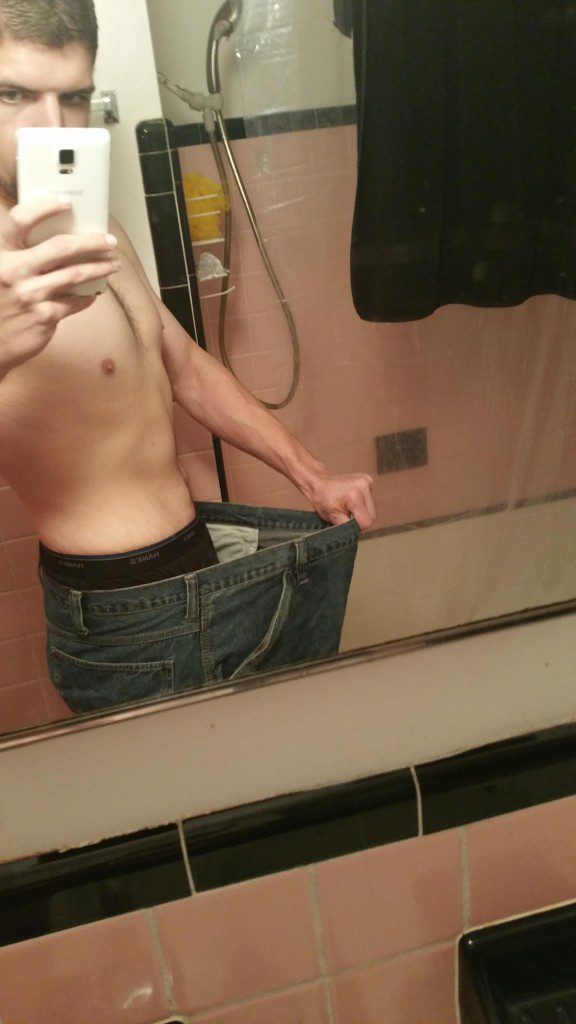 What are the other great things about losing weight?

Wow, everything has changed, I mean everything! I no longer nearly fall asleep at my desk at work, I actually get girls checking me out! I can buy clothes at normal places instead of the cattle section of Walmart. I just wish I had done it sooner. I am now 30, and almost all of my twenties was spent fat, lazy, drunk, and all of those years, I cannot get back. Last but definitely not least, losing all that weight can literally reveal an inch or two in your pants that has been hiding behind all that extra skin. That alone is nearly worth it!

What advice do you have for other guys who want to lose weight?

Ask yourself this: what is your goal in life? Do you want to be healthy, and active, and live a long fulfilling life? Of course everyone wants that, but are you working toward that? If the answer is no, why not? If the person you are with, or want to be with for the rest of your life does not share in your life long goals, it seems to me that perhaps that just may not be the right match for you. Do not try and fake who you are, or what you want out of life as you will regret it, and never be able to get that time back. If your partner really cares about you, they should be able to at least help motivate you, and encourage you to keep going! If they are not even willing to do that for you, perhaps it is time to move on and focus on yourself.

One final thing to say that is unrelated to the last question when it comes to, not only weight loss, but really anything, is do you really want it? Are you ready to do what it takes? If so, you can and will achieve your goal, there is no question. Now is the best time to at least give it a try, and find out if you are ready, because if you are, your life will change forever.

As with all our Amazing Losers and their weight loss before and after stories, you can find Dan on Talk, where he is happy to chat through anything you’d like to know. It’s all free and it makes up the world’s biggest social network of men who want to get and give support around weight loss.

So what was your answer to Dan’s final question? Do you want to make a change? If you do simply sign up for one of our free 30 day online weight programmes, the only thing you’ve got to lose is fat…