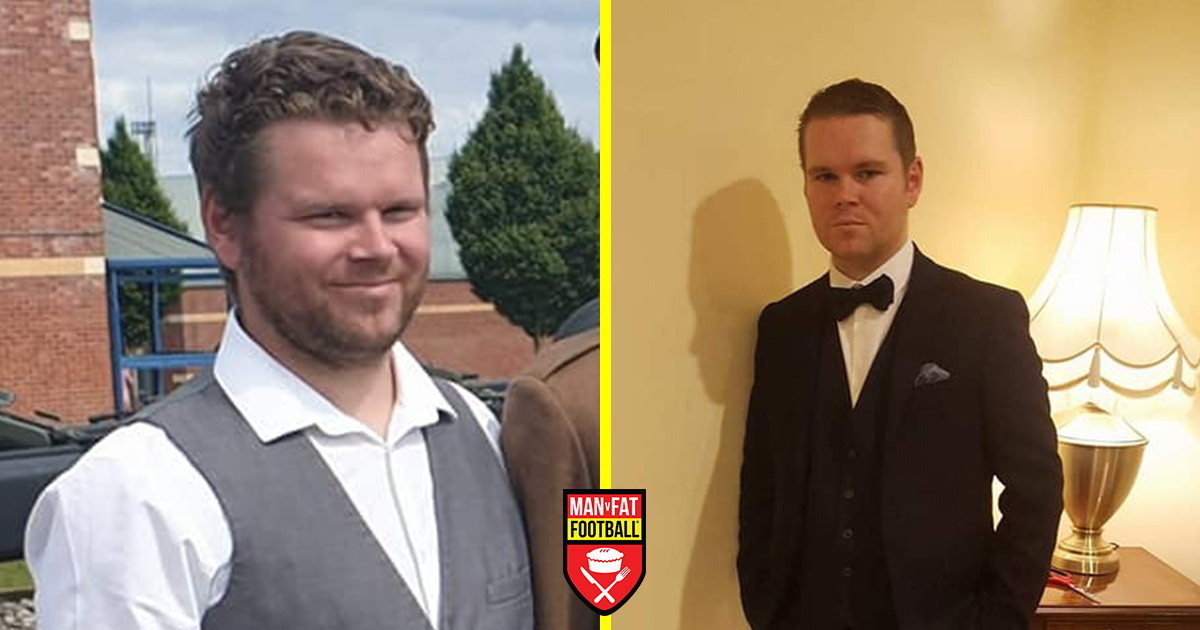 There’s nothing we love more when it comes to Amazing Losers than someone really getting into it and sharing their thoughts about weight loss. There’s so much to say, and it’s so reassuring when someone just gets it. Like Justin here, who has a very balanced approach to weight loss, recognising that sometimes ‘life just calls for a Mars bar’. Because sometimes it really does!

Working in an office for a number of years and not really caring what I ate.

I’ve slowly gained weight over the last 5 years. I’ve watched those documentaries in the past on TV (stuff like The World’s Fattest Man and Supersize vs. Super Skinny) and I always thought to myself “there must be a day when they look at themselves in the mirror and think ‘Blimey, I need to drop a few pounds”. But actually, I can see how people get to where they are.

To lose weight you need to be in the right place mentally and that’s not just deciding to eat celery instead of pizza, it’s lifestyle choices too.

I’m lucky in that I’m a huge football fan and played a lot when I was a kid, so if it weren’t for MAN v FAT Football I would have nothing that I enjoy to help me lose weight. If I’m honest, I probably wouldn’t bother.

For me, MAN v FAT Football provides the right mix of things to keep me motivated to lose weight. There are individual goals, team goals and an opportunity to enjoy the sport I love without worrying about being the best or the fittest as we’re all in the same boat.

It’s a mental thing more than anything else.

People talk about Barbie being a bad body role model for women, but the conversation often goes quiet when we talk about men. He-Man, Hulk Hogan, heck even Optimus Prime had a 6 pack! And because of that, anything normal is often seen as “not good enough”.

Many men can get stuck in a rut if they can’t, won’t or don’t have time to achieve the goals set for them by society. I got stuck in a rut. I got depressed. The best thing to cheer me up was food and TV – I’ve never been a drinker so food was my comfort.
This is all great until clothes stop fitting, people start saying that you look bigger and you’re tired a lot more than you used to be.

What was the moment that made you decide to change?

When lockdown started last year, I figured that I would try to lose weight so that when I returned to the office people would notice that I had lost weight. I’m quite small, relatively speaking, which makes losing large amounts difficult but I keep chipping away.

What did you decide to do to lose weight?

Before I joined my local MAN v FAT club in Shrub End, I decided to lose weight by jogging, using a vibration plate, eating healthier meals and eliminating snacks.

Jogging was difficult at first because I was unfit, I also couldn’t get myself to “just run”. I would get 400m down the road and stop, it was no good.

The vibration plate is pretty good, I still use it but it’s no substitute for proper exercise and good food.

Eating healthier – I tried going cold turkey on takeout but that didn’t work, I tried making healthier choices when ordering, but that was tough too as I usually get it when I’m tired and I just want something that’s easy to eat.

I have made slight changes like avoiding pizza and curry at all costs, but if I fancy a Subway, I’m getting a BMT with a load of salad.

Snacks are still my weakness, Bourbons are my kryptonite.

A typical day when I was at the office:

Breakfast – Cereal
Lunch – Leftovers from the night before or a ham sandwich
Dinner – We now use Gousto which delivers healthy meals with fresh ingredients and proper portion sizes – some of the recipes are really yummy and it’s proper food.
Snacks – I try to avoid *really* unhealthy food but I certainly eat less. I really enjoy Nairns Fruit and seed oatcakes 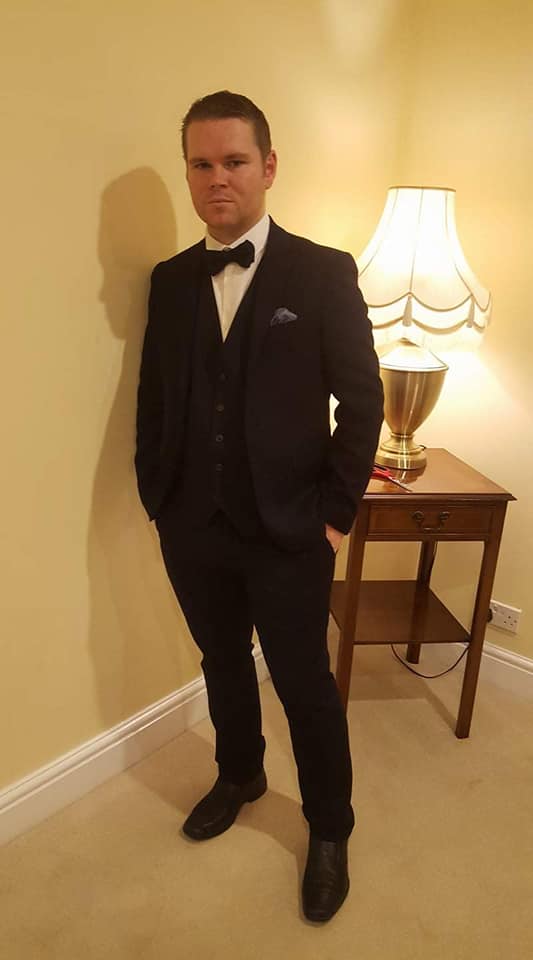 I went to Weight Watchers before, but I struggled with sticking to it (although our leader and the people there were fantastic). MAN v FAT has been really different for me as I want to play football and I want to win both on the pitch and off of it.

You’re a MAN v FAT Football member. Why did you join, and how has it helped you?

I joined initially to lose weight, but after 2 weeks I realised it gave me confidence. I was part of a team that I now consider friends, and it has driven me to be better both for myself and for them.

Even if I hadn’t lost weight I’d still say it has helped me immensely. I’m fitter and my mental health has improved drastically.

What would you say to anyone thinking of joining MAN v FAT Football?

Do it. I think MAN v FAT are missing a trick by not branching out into sports like basketball, rugby 7s or hockey (ed – a few of us have talked about MAN  v FAT Darts for a few years…) but yes absolutely do it.

It doesn’t matter how bad you are at football, how long it’s been since you’ve played or even if you want to stand on the side and begin by joining the action for the last 5 minutes, I’d say go for it.

The leaders are personable and are there to help and it came to no surprise last week when I found out some of my team go to other MAN v FAT Football sessions at other venues, it’s such a great thing to do.

What has been the most difficult thing about losing weight?

Starting…and then continuing. It’s as easy to finish as it is to start but it’s the keeping up with it which is the challenge.

Will I ever have an 8 pack like He-Man? 24-inch biceps like Hulk Hogan? Or a full leather interior with electric windows like Optimus prime? Absolutely not, but I can drop this weight and get fit by keeping doing what I’m doing.

How have you overcome these difficulties?

I’ve made small regular goals, I’ve stuck to them and I’ve celebrated those wins.

There’s no point making a stupid ambitious goal like “I wanna look like Cristiano Ronaldo” because for most of us that’s extremely bloody difficult, but eating an oatcake instead of a cheesecake is possible, portion control is possible and so is running those few extra yards after a misplaced pass during your MAN v FAT Football session.

I would also say don’t destroy yourself if you screw up. Sometimes life calls for a Mars bar, just try not to eat 6 of them (I’ve been there). Sometimes it’s someone’s leaving do and you want to drink 8 pints, that’s cool too (as long as you don’t drive after) but don’t try and starve yourself to counter it.

Take on the chin, keep moving forward at your previous pace and know that it’s an exception to the rule, you don’t eat 6 mars bars and drink 8 beers every day. 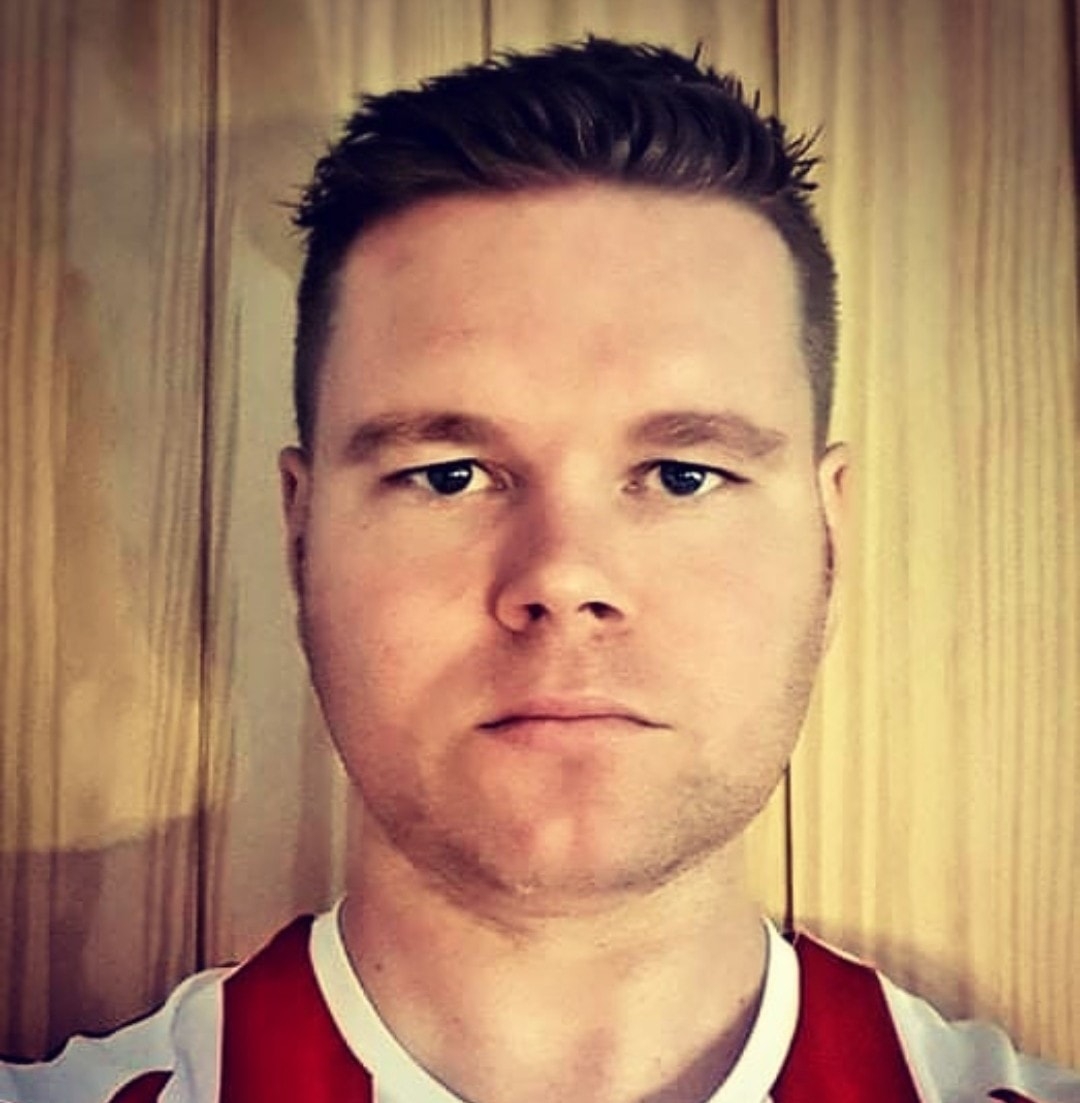 Nothing massively yet, although my mates have said I look slimmer. My moods are generally better though so that’s something which has affected a lot of people.

Time for a shout-out! Who has helped you lose weight, and how have they supported you?

My wife and kids and been fantastic. My wife looks after the kids when I go out and play football and she also doesn’t moan when I spend a fortune on shin pads, boots and red football shirts.

Iffy, Darren, Terry, Bright, Jay, Dan, Gareth & Scott – Borussia Munchinflapjacks. The team are absolutely fantastic every week. I know I’m not the best footballer and I also know I’m not the biggest loser but these guys are with me every week (apart from Terry, who likes to go to the south of France at any given opportunity)

Mark – a great coach, tells me straight how I’m doing every week and offers a tonne of support in the WhatsApp groups.

You’re Prime Minister for the day – what would you do to help combat the current obesity crisis?

Education – We need to educate school children about nutrition, making the right choices and provide training on how to prepare good food. We also need to continue showing the benefits of exercise and not make PE a popularity contest hosted by the PE teacher.

Social – We need to ensure people can afford to eat healthily and we need to make good food accessible. Why are chips cheaper than potatoes? Have local farms and supermarkets team up with milkmen and have them deliver fruit and veg parcels to families when the milk round is being done – provide this service to all households earning less than £70k the cost will be cheaper than the costs associated with dealing with obese people on the NHS.

Re-open youth centres and get children exercising again, work with companies like Niantic (the team who developed Pokemon Go) to create tech-driven incentives to get fit again, in fact, team up with any game dev… Encourage kids to exercise for Fortnite skins – push the benefits of exercise on the youth.

Drop the full time working week down to 4 days and encourage people to exercise on their new day off. Turn Friday into Fitday with cheaper gym entries (I’ve also created publicly owned gyms funded by the taxpayer to compete with private gyms in my day as PM).

There is a tonne of things we could do. I’ve literally come up with the above ideas without really stopping to think, imagine what I or many others could do if we were given a government who wants to tackle this seriously but the truth is, they don’t.

If they did, they wouldn’t be letting Starbucks and McDonalds avoid tax, we would be taxing Coca Cola for its sugar drinks instead of putting the cost on the consumer and they would be helping our poorest feed their families instead of pushing them towards food banks which often only provide processed foods.

What three things do other fat man need to know about losing weight?

1. It’s not just about physical health, it’s about mental health too

2. Rome wasn’t built in a day, you will gain and you will lose along the way, and it’s never a constant downward trend

3. Wear sunscreen. Everything else on this survey was just my opinion but sunscreen will scientifically benefit you when you’re outside.

Many thanks to Justin for sharing his story! If you want to be featured as an Amazing Loser, send us an email – [email protected]