Looking to find the details about a particular diet? Or maybe you’re wondering if a particular diet plan is the one for you? Whatever the reason we’re bringing together the greatest collection of diet plans for men. Before we get started though, it might be useful to point out which diet plans men actually want to do.

In the MAN v FAT book we conducted an in-depth survey of men’s preferences for diets. The following pie chart (yeah, we get the irony about putting pie charts in a diet book, very good) sums up the preferences that men had when it came to which diet they were going to do: 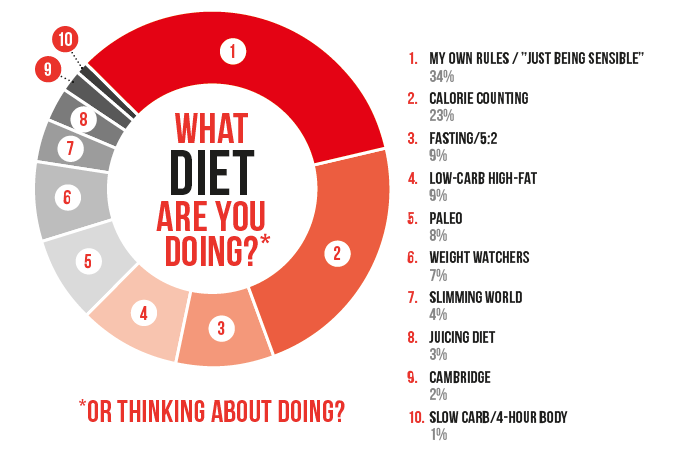 There are two really interesting things to take out of that result.

The first interesting thing is that men really don’t want to do any kind of named diet. Perhaps because so many of these programmes have traditionally been targeted at women, men simply don’t feel comfortable doing them. That’s despite the fact that many of these programmes typically give excellent results – it’s like the whole brands are simply toxic to men.

The second really interesting thing is that it shows just what a bunch of control freaks we are! Nearly 6 out of every 10 men want to do a diet plan that they control perfectly. Either “just being sensible” (which typically seemed to mean: stop drinking like a wild man, stop snacking, eat more veg, cut down on carbs, sort out portions and do more exercise) or calorie counting is the sort of thing that a man can own. It’s the sort of thing that you can create your own system around. It’s also – let’s be frank – the sort of programme you can do without anyone else knowing. Well, we know but we don’t really count.

So, if you’re looking for which diet you want to do then don’t discount doing it your own way. In the meantime here are some in-depth looks at the different options that men do take.

We’ve provided information on an extensive range of diets and we’re adding more all the time. If there’s one you’d like to know about, just let us know and we’ll get on it.

Need some information about a different diet not featured here? Let us know and we’ll write it up. Need help getting started on one of these programmes – head over to the weight loss forum and we’ll help you out.