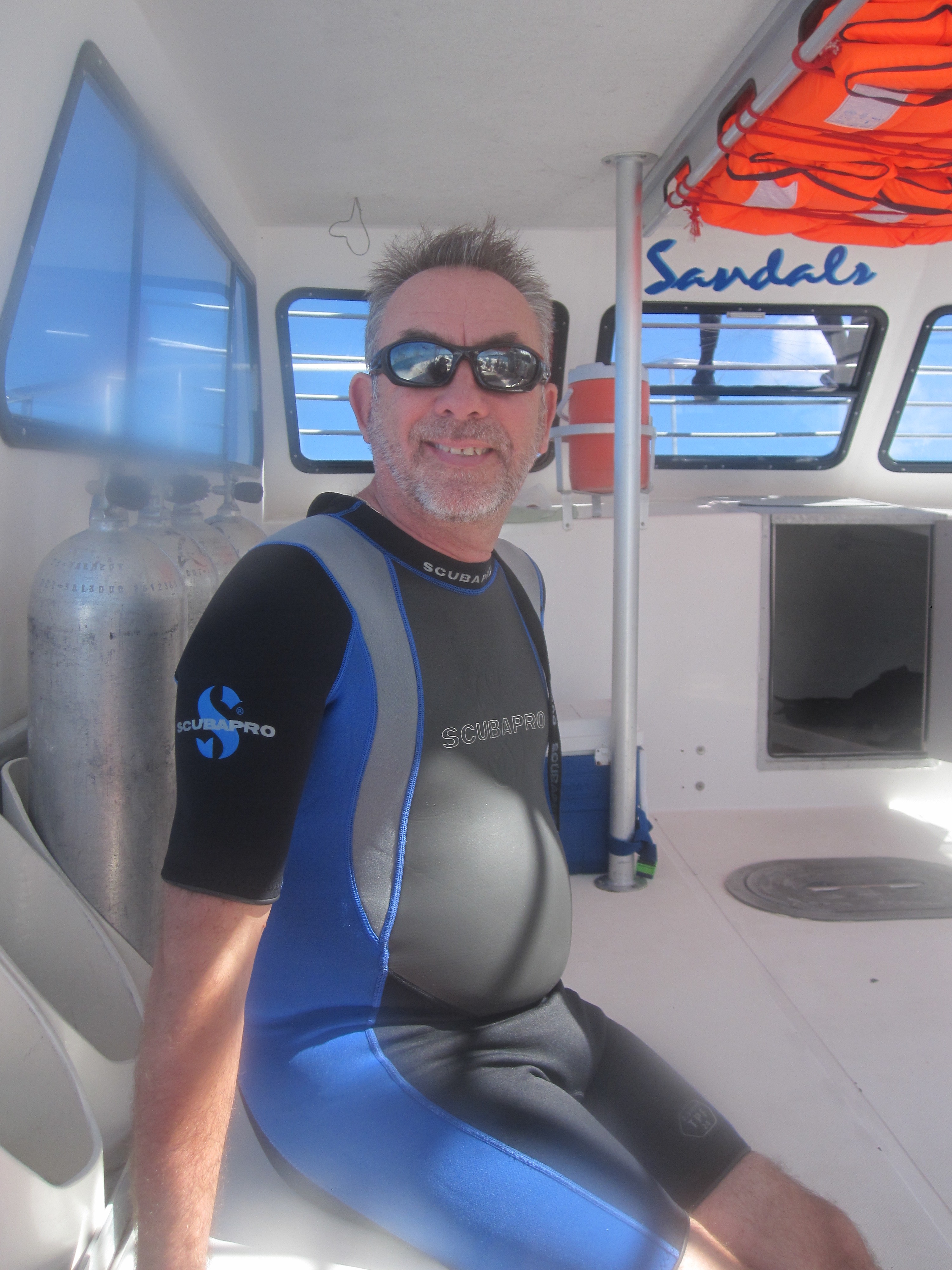 Hi Stuart, we’ve talked about your story not necessarily being a good model to follow for other people as it takes in a really rather serious illness. That said, I think it’s important to look at all forms of weight loss and yours is a really encouraging story that shows that even a period of illness can lead to a much healthier time. Do you want to start at the beginning? 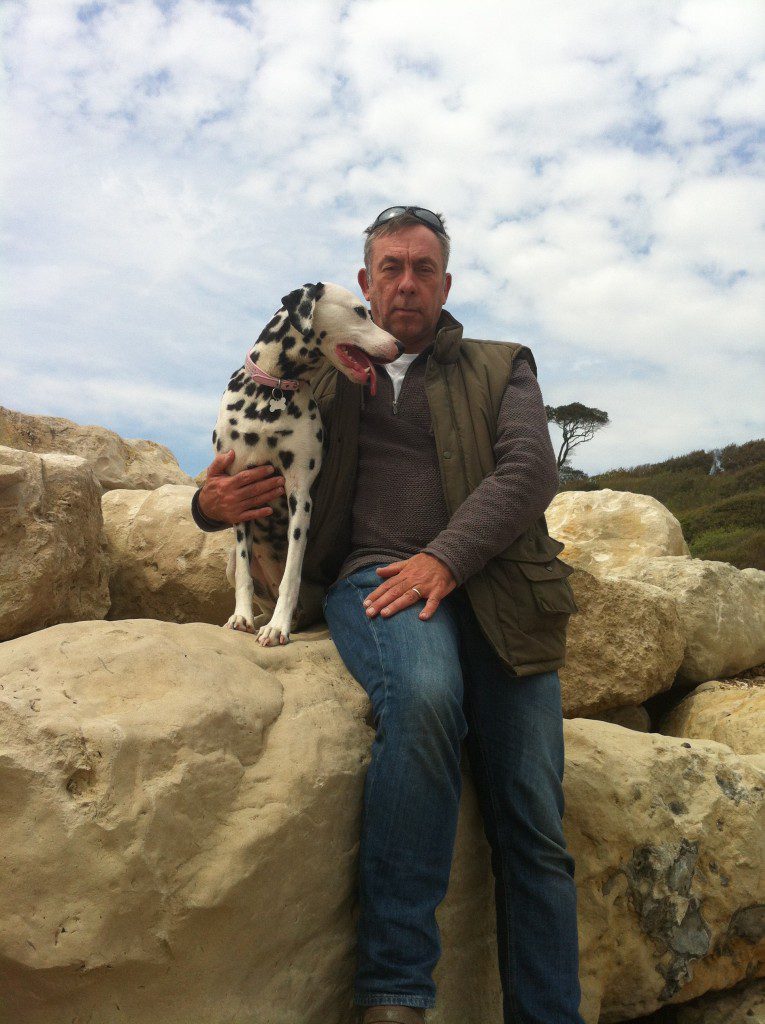 Sure, my story starts in August 2012. I went along to the blood donor’s suite to give a pint, something that I have been doing for well over 30 years without so much as a dizzy or light-headed feeling. I originally started giving blood for the extra hour off that my employer at the time used to give you, as well as the tea and biscuits! I have gone on to be a silver level donor (25 donations) and I’m working towards Gold (50). However on this particular occasion I wasn’t allowed to donate because the testing showed me to be a bit on the anemic side. I was sent home with a leaflet about anemia and the suggestion that I should have a good steak to bolster my iron count, and talk to my GP.

The next morning I went along to my gym and did my usual morning workout, when I came out I was a little surprised to find three messages on my mobile phone asking me to call my GP. Returning that call to my GP led me to visit her and after a few questions saw me admitted to Bournemouth hospital that same day for investigations.
During that first admission I was told that they suspected that I had a Gastrointestinal Stromal Tumour (GIST), but that further blood tests, scans and gastroscopies would be required. The information leaflets I was given were from Macmillan Cancer Support, so the Cancer word had been well and truly mentioned. 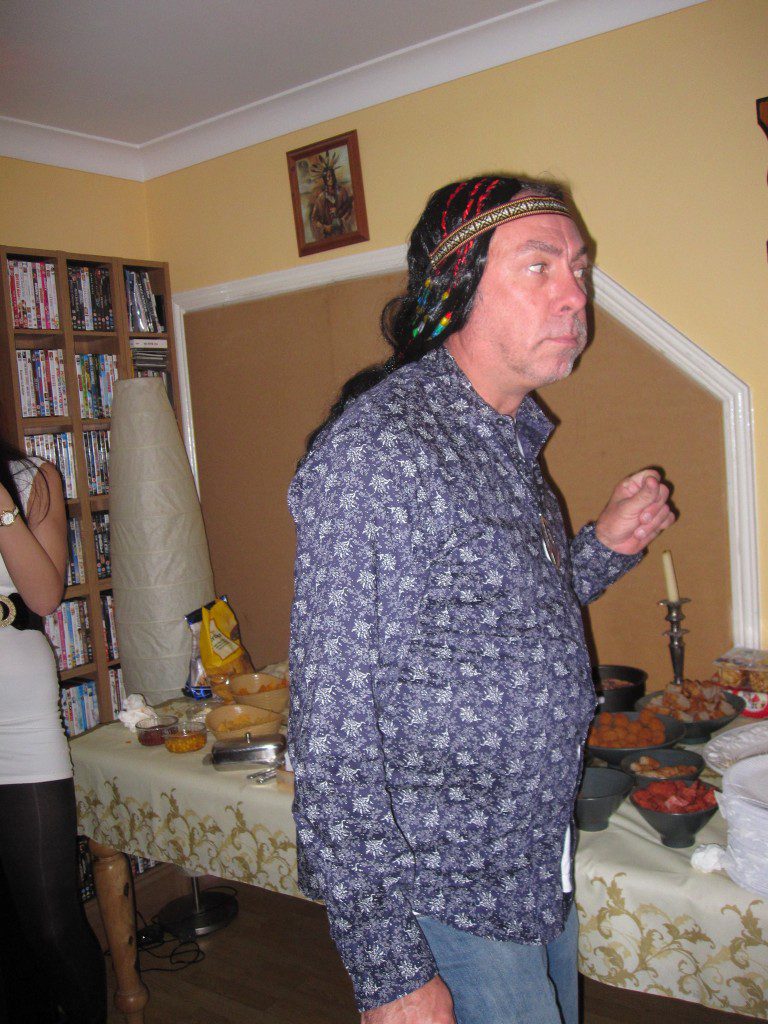 I know that you had a fight to get the right diagnosis and the right sort of care, but it ended up with you needing a Whipple’s Procedure, (also known as a pancreaticduodenectomy) – how was it when you were waiting for the operation?

I’m not blessed with huge amounts of patience nor am I particularly a worrier and so my attitude was, “There’s something wrong, it needs fixing, now let’s get on with it.” If I’m really honest I probably didn’t go into the operation with my eyes fully open and nor did I really believe the length of time it would take me to recover. Others around me, notably my wife, took on board what we were told and in truth probably did most of the worrying for me. I often think it must be harder for those around you than it is to be the patient.

I was admitted to Southampton General for surgery on the 30th October 2012. Looking back it seems surprising that all of this happened in just three months, it felt at the time like a lifetime. I had after all been told at an early stage that there was a 90% plus chance that the tumour was cancerous, so I just wanted to get on with things. The operation itself took ten hours. I remember very little about the first few days, which were spent in intensive care feeling like I’d been hit by a bus.

How long did it take to come out of hospital?

I was in for 14 days, during which time I lost two and a half stone, as well as various bits of internal plumbing, pancreas, duodenum and stomach and a rather large tumour, and I woke up with what looked like a railway track running from my chest down and round to my hip and three drainage bags uncomfortably stuck to me. Looking at my scar my first thought was that I needed to tattoo some tooth marks around it and make out I was a shark attack victim. It was also at this point that I realised that I would have a long list of drugs to take for life. Sitting around in hospital there was plenty of time to reflect on the fragility of life. This illness had come as a complete bolt out of the blue and I resolved to recover my levels of fitness and live life to the full. 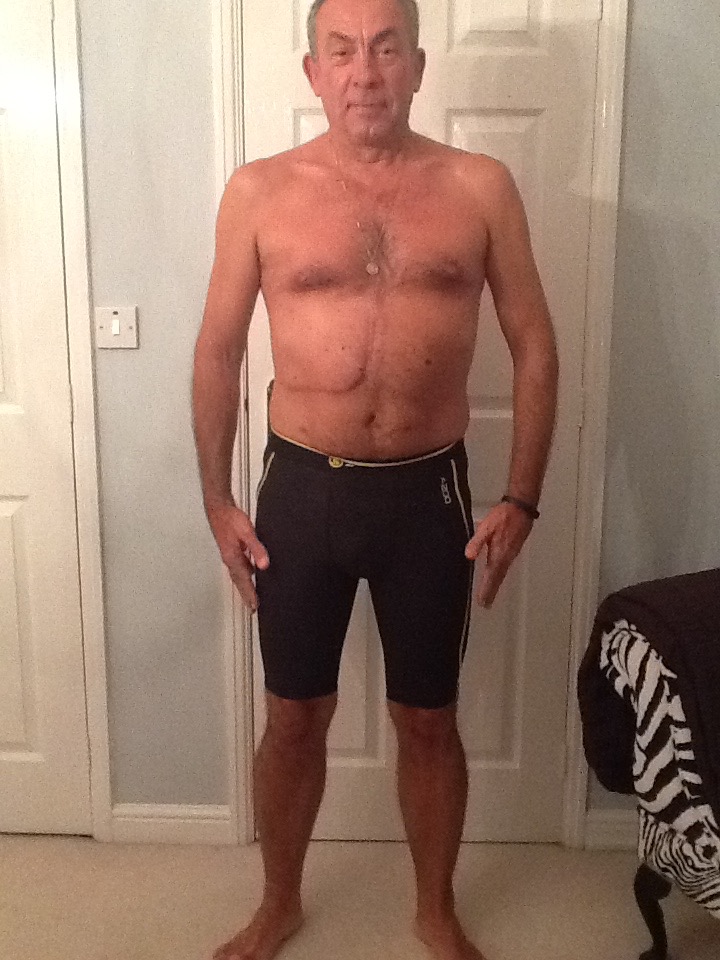 So you’d suddenly lost all of this weight and you’d been through a really traumatic operation, how did that impact your recovery?

When I did finally go home in the middle of November, the reality of how weak I was hit home. I couldn’t manage the full two flights of stairs to bed without a sit down halfway and I had virtually no appetite. Lots of seemingly small things become real milestones and my next target was to get rid of the drainage bags, finding ways to stay comfortable with bags of fluid taped to you was a real challenge, as was having a shower, which in itself was an exhausting process. I had two of the bags removed in mid-December and the third one thankfully just before Christmas.

It was after the removal of these that the pace of recovery moved on. The family photographs of Christmas 2012 include some rather gaunt looking pictures of me trying on some new running clothes. I couldn’t really walk very far to start with and on a few occasions we went to the beach where it was all I could manage to get from the car park to a bench by the beach, (probably no more than 100 yards) but that was an opportunity to set new targets and gradually the distance I could walk increased. My next milestone was to do a full lap of the woods behind our house. It took some time and initially I had to do the lap using the easier, downhill route, but I did get around to doing the full mile.

I’m generally fairly active and for me holidays have to be either up in the mountains or under the water. We missed both our summer scuba diving holiday and our winter skiing holiday in late 2012/early 2013 so the next target was to be fit enough to catch up on those activities. By now I had let my gym membership lapse so I set up a small area in the garage to do some work outs and chose the most challenging workout DVDs that I could find to prove a point to myself. In October 2013, just two weeks short of the first anniversary of my operation, I got back underwater with a 45 minute 15 metre deep wall dive followed by a 48 minute 10 metre marine park dive. They must have improved my breathing too because I don’t usually manage that long!

Next up in March 2014 it was off to the mountains to play in the snow and thanks to a new app I was able to record a top speed of just under 30mph in the Canadian mountains and a blast or two down their black runs. It’s a shame that the ski app didn’t also work in the hire car because on the way back to the airport I fell foul of the Mounties and their strict speed limits and ended that holiday with a speeding fine!

I know that all of this has impacted on your weight in a couple of different ways.

It has, my consultant has told me that because of the extent to which they removed my pancreas (about half of it) that makes me potentially susceptible longer term to being more prone to diabetes, so that’s a factor in wanting to manage my weight loss and stay as healthy as I can be.

Not all of the weight loss has been because of the operation has it, how have you changed your eating then?

I’ve learned to eat a lot more mindfully. I used to have a takeaway probably at least weekly now it’s less than monthly. My real food issues were portion control and habits. I would eat a lot of bread, not particularly because I enjoyed it, but out of habit, gorging on chip butties and that sort of thing. I’d also use the excuse of not liking to see waste so I never left anything! I’d also cook a four person quantity and eat most of it.

I’ve never been a snacker between meals but I ate lots at mealtimes, sometimes too late in the evening and often I’d eat late after a social occasion, not becauseI was hungry but because I never skipped meals. Since I was ill I also cut out alcohol and was amazed at how much of a difference that made. It changed things from two aspects. Firstly, just how many calories there are in alcohol and also because when I had a beer I’d often eat a family-sized bag of crisps with it. Making those changes has seen me return to a healthy weight. In all of this the biggest surprise for me was how much small changes had a big impact. 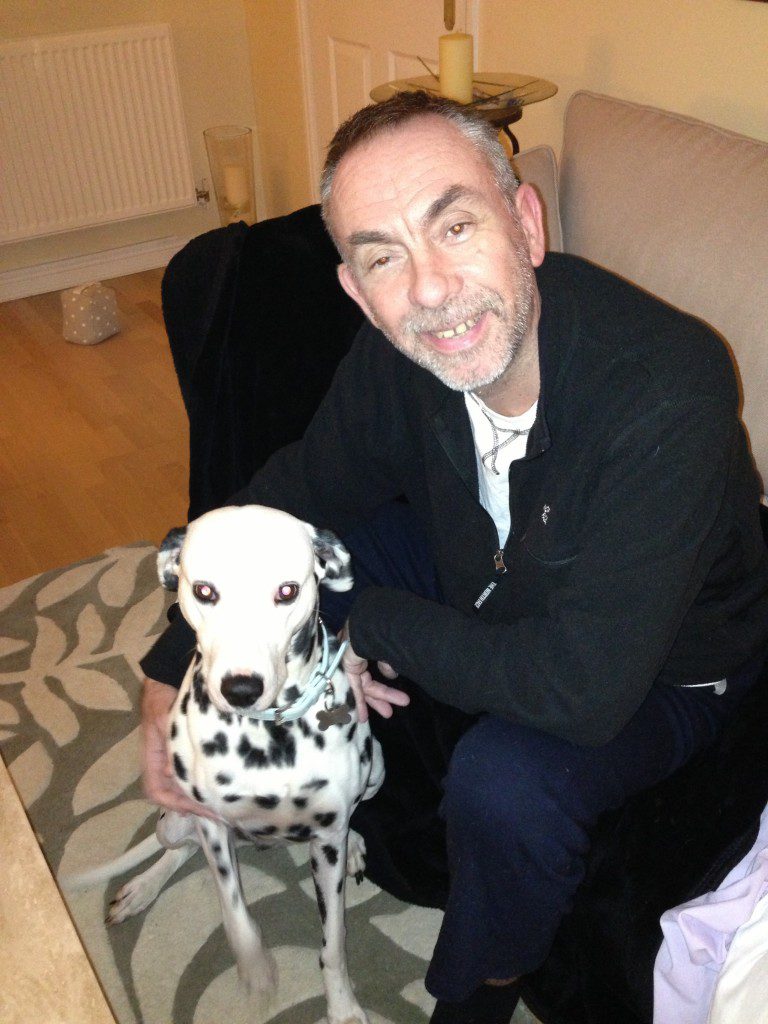 That’s right, I’ve become passionate about raising money for PLANET and I’ve done a fire walk and now I’m planning to swim the Solent with seven other guys. I’ve really challenged myself with the swim because in January I was a leisure swimmer who was barely able to do two lengths of the pool and now I’m doing about 7km a week. It’s also helping me to focus on my weight and I think I’m down another half stone since I started and I’ve lost a couple of inches off my waist too. If you’d like to support the swim then please donate here.

What have you learned about life from the process of being ill?

I’ve learned that there is plenty of life left after a Whipples, with lots of exciting things to do but I’ve also realised that there’s lots of simple pleasures to be gained from being with friends and family, walking dogs on the beach or just making the most of every day. I may not ever be able to get round to giving that 50th pint of blood, but that’s a small price to pay.

It obviously doesn’t need to take a serious illness to make you decide to change your health for the better, but Stuart is living proof that even when life knocks you down you can still make positive changes. Ask Stuart anything over on Talk now and if you’re an Amazing Loser, or you know of one, then get in touch.