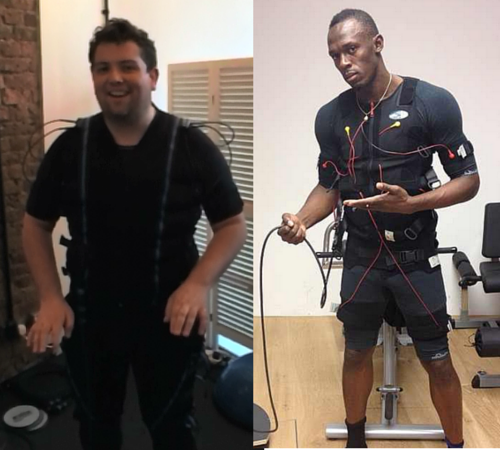 Can Fat Men Do Exerceo?

Exerceo is a new electric muscle stimulation training that is gaining favour among those in the know. We sent Martin Dixon along to test it out and give us the view on whether it’s suitable for bigger guys.

Without knowing anything about it, even the term “fat electrocution” filled me with equal parts dread and excitement. My assumption being that I would either arise like a svelte butterfly from the cocoon of my tubby exterior, or die in the process. My biggest concern going into the session, was whether I had a heart condition I didn’t know about. Exerceo I thought might be a laboratory deep in an underground bunker or maybe a bit like a spa treatment. I didn’t realise it was an exercise. Not that I’m opposed to exercise but I was taken aback.

I arrived at the Exerceo Training studio quite late and in a huge rush but the instructor, Nooroa was very calm. It’s a new business so not every slot is booked up as yet luckily for me. The studio is located in small shop that’s been kitted out for every comfort. I was instructed not to bring anything with me. I didn’t have a towel or clothes, or even a water with me. At Exerceo they provide everything for you though.

Nooroa, gave me an extremely tight top and leggings to slip into. As a more voluptuous man I was embarrassed as I stepped out of the bathroom. I was dressed like a hilariously out of shape super hero, that wasn’t the end of it though as Nooroa then started to dress me up like the terminator. There was a vest that buckled up in front and something that strapped around my waist like shorts with no crotch. The suit was thick and cumbersome with wires poking out from the shoulder. I felt like the future.

[blocktext align=”left”]I ran the marathon this year and I thought the day after that would be the hardest day of my life. [/blocktext]

The work out itself was simple but the suit vibrates or electrifies you, which makes everything you do ten times harder. We started with squats and after five I thought I might die. Nooroa warned me that the suit was more painful if you weren’t moving so I kept moving. The suit would vibrate for eight seconds where I’d do five or four reps of whatever exercise we were doing. Then the suit would pause for two seconds and I’d remember to breathe until the suit started up again.

I was taken aback by how hard the work out was and then Nooroa reminded me we’d only been working out for two minutes. We did squats, push ups, sit ups, some bicep curls and some more squats.  At one point during the push ups my calf decided to flex involuntarily and with increasing strength for around ten seconds. I thought my leg would rip itself off. In total it’s a 25 minute work out and then I laid down in the suit whilst it vibrated to relax me, something, Nooroa informed me, most people enjoy although I cannot say I did.

Please note: this is not a before and after.

The work out was over and I was drenched in sweat. I showered and put on my own clothes again. You really don’t need to bring anything, they have thought of every detail. After the short work out I went back to work and was fine but drenched in sweat for the rest of the day.

The next day however I thought I might’ve been paralysed. I ran the marathon this year and I thought the day after that would be the hardest day of my life. I was wrong. After only 25 minutes of Exerceo, the next day I couldn’t touch my own face let alone my toes. It was awful and lasted two days in total. I couldn’t scratch the back of my head or put on socks.

See also  Working out in the summer: what you need to know

It was annoying and hurt but obviously that meant it had worked. It was the most full-bodied work out I’d ever had. I believe if I’d been able to go regularly I would’ve lost weight and gained serious muscle.

The downside is that Exerceo is expensive. It’s a great work out for someone who doesn’t want to spend hours in the gym because it makes the work out you do more effective. Nooroa suggests Exerceo twice a week plus your own cardio. Two 25 minute work outs a week to replace twice as many gym sessions that are twice as long. You certainly get a lot of exercise for your buck but at £50 per session (although there are deals for regular users, mention MAN v FAT when you book) it is still quite a lot of buck. I assume for the time being such effective methods of muscle building and weight loss are kept only for the elite. However if you want to take a serious approach to weight loss in a small amount of time I highly recommend this all-pain all-gain extreme exercise.

Our thanks to Exerceo Training for showing Martin the ropes and for inflicting hideous pain on him too. What do you think? Is there ever a reason to use a quick fix when it comes to your weight – what sort of things have you tried in the past?