Can Fat Men Do CrossFit?

Over on Facebook we’ve always enjoyed giving a bit of grief to the very vocal CrossFit community, just because very occasionally they can sound the eensiest bit like a cult and because we’re jerks like that. One passionate CrossFitter and MAN v FAT member Mike Halewood got in touch to defend his hobby, so we took him at his word and asked him to explain more about what CrossFit is and whether CrossFit for fat guys works. 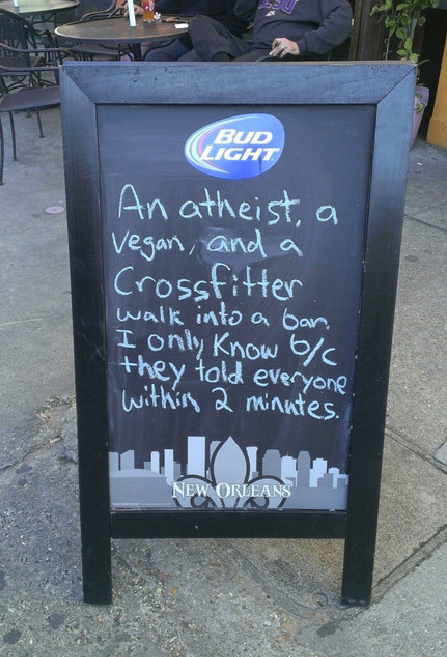 During the early part of my fitness journey I started to watch a programme called Biggest Loser. One of the trainers was a guy called Bob Harper and during one of the workout sessions I heard him mention CrossFit. He had the contestants doing a Benchmark WOD (workout of the day, you get used to all the acronyms and abbreviations eventually) which was called Fran. Fran is a 21-15-9, which means 21 Thrusters, 21 pullups, 15 thrusters, 15 pullups, 9 thrusters, 9 pullups. It looked amazing, and most definitely it looked like really hard work. I thought it was definitely something I would love to try when I was fitter. What I didn’t know is that in only a few short months I’d not only be doing CrossFit but competing at it too.

So, what is CrossFit?

CrossFit combines functional fitness and strength training along with some basic gymnastics moves. The idea is training for the unexpected. The idea is that it is totally scalable, so is suitable for anyone to take part in. Before I went for my first class I was convinced that it would be too hard, or that I wasn’t quite ready.

I had been told about a class called CrossFit Lite. It was a pay-as-you-go class that anyone could go to without any previous experience. It seemed like the perfect chance to try it out. I convinced my nephew to go with me, as I felt too nervous to go alone. You have to remember at this stage I was 19 stone, and had been losing weight by focusing on my food and fitness. In no way did I feel like I was an athlete, despite having competed at county level in archery for years.

[blocktext align=”left”]Looking inside of the gym it looked empty, there were no treadmills, or cross trainers to be seen. [/blocktext]

I remember pulling up outside CrossFit Leyland and feeling completely out of my depth! The large roller door to the gym was up and there was a class inside already in full swing. People were running in and out of the gym, some doing Box Jumps. Looking inside of the gym it looked empty, there were no treadmills, or cross trainers to be seen. We walked in and where introduced to the coach. After filling in the health and safety form, other people taking the class had arrived, so we all went down to the gym floor and the class started.

The coaches are all brilliant at what they do, they explained all the movements, including the various scaling options for each move. In its simplest form scaling is the option to reduce the weight or intensity involved in a particular movement to suit the individual and to ensure that you can do all the movements safely. It was after this class that I knew I wanted to do some proper CrossFit classes so the next step was booking on to the Foundation Course, this is a long series of classes designed to make sure you can do all the basic fundamental movements safely.

When I booked in for my first class, I was a bit surprised to find it took place at 6:15am on a Monday morning. Walking in to the class I felt really intimidated. The other people in the class all looked much fitter and had obviously been going for a while. But right from the start I was made to feel welcome by the Coach and other members. We started with warm up, followed by some mobilisation and stretching. All CrossFit classes have four parts to them, a warm-up and mobilisation, strength or skill, the WOD (workout of the day) then stretching and cool down. 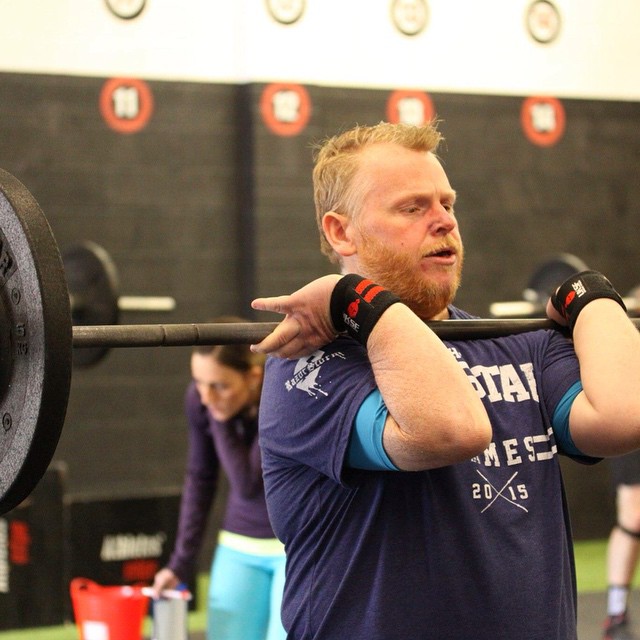 The strength element in my first class was the snatch! At this point I had never done any Olympic weight lifting at all, I thought to myself, “How will I ever do this?” Everyone was loading up bars with their own particular weights. I didn’t even have a clue what to put on the bar, but the Coach spent a little time showing me the technique and had me practising on an empty bar. Before the end of the strength section I had actually snatched 30kg. This was a complete surprise to me. It made me realise that maybe I can do more than I first thought.

The next part of a CrossFit class is the workout of the day. This could be anything, you have no idea what the WOD will be until we walk in to the gym and look at the whiteboard. Every part of the WOD can be scaled to the level you’re at. For instance, there is a movement called Toes to Bar. This involves hanging from the pull-up bar starting at full extension, then swinging your legs up and touching both feet on the bar. I’m still a long way from being able to do this movement. This can be scaled to high knees, still hanging from the bar but raising both knees up as high as possible. Again if this movement is too difficult you can be lying flat on the floor and doing sit-ups or leg raises.

The thing that really separates it from a normal gym session for me is that CrossFit has an amazing community of members. You hear this all the time and it’s completely true. Everyone gets cheered on and encouraged, the loudest cheer is always saved for whoever finishes last, which I do fairly often. I had to do more classes, so booked on for some more. It can get quite addictive.

I had only been attending class for a few weeks when there was a buzz around the gym. There was talk of something called the CrossFit Open. This was the qualifying competition for the CrossFit games, 5 WODs over 5 weeks, with CrossFit gyms worldwide taking part. The top people worldwide would then proceed to the Regionals and finally on to the Games. 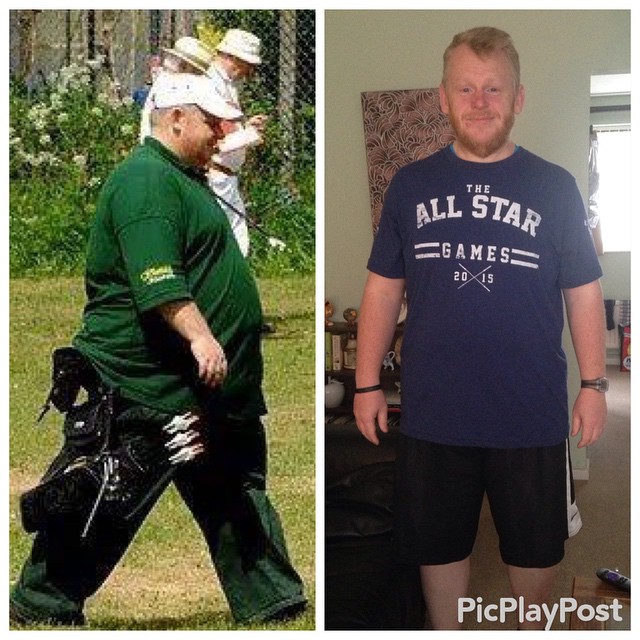 This year they had made a scaled division to make the competition more accessible for everyone. With some encouragement I decided to enter. The main reason was just to take part, I wanted to be part of it and get to know more people at the gym. I’m really glad I did it, I enjoyed every single WOD, even though it was the hardest thing I’d done, up to that point.

I’ve since taken part in my own gyms in-house All Star Games, which was three WODs in one day, everyone separated into heats with six or seven people in each heat. All of these were judged and scored, with the top three people in male and female events winning some prizes. Never once, was I made to feel like I shouldn’t be there, for me it was all about getting involved and just taking part. Waiting for the count down, then giving it my all. That is all that’s required.

The biggest part of weight loss for me is having my head in the game.  I do find that attending CrossFit classes keep me focused, keeps my interest and as you’re always pushing your fitness you don’t want to let yourself down with diet. I’ve now been doing CrossFit for four months, and although my weight loss on the scale has slowed (I’ve only lost a stone since Christmas) I’ve lost inches on my waist and chest. Which shows I’ve been losing fat, if not a lot of weight on the scale. As you can see from the picture below – a CrossFit session is certainly a good way of blowing through 500+ calories. 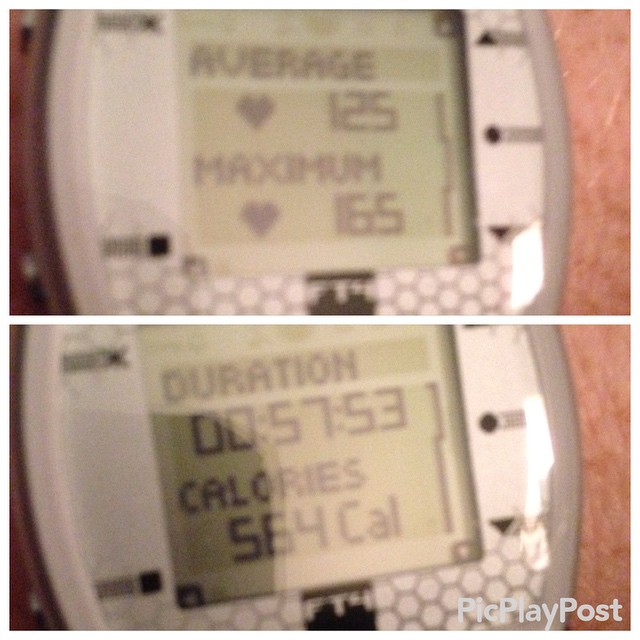 I’m still around 18 stone and I can honestly say that being a bigger guy has not hindered me from doing CrossFit. The whole point of CrossFit is pushing your own personal fitness and goals. Making continued progress, competing with no one but yourself and all supported and encouraged from an amazing community. Give it a try.

Are you thinking about trying CrossFit – are there any other sports that you’d like to see bigger guys giving a try (don’t forget to check our verdict on whether fat men can do parkour)?