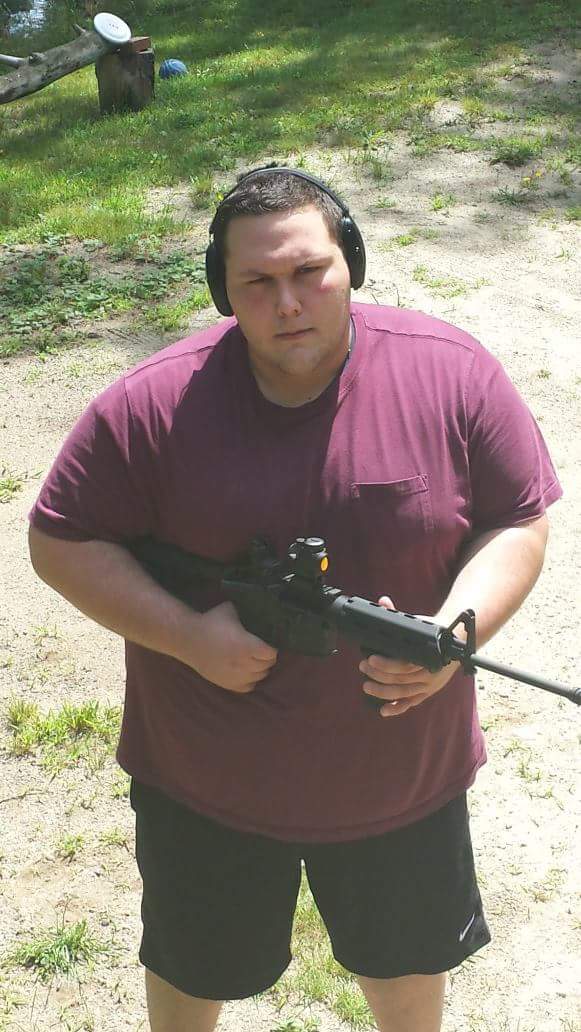 When we started MAN v FAT, calorie counting struck us as the most reliable means of controlling weight and therefore the safest to recommend. Except it can seem daunting, and tedious, which is why diet plans with a more sexy USP – such as the “eat like a leopard” diet – tend to be more popular.

The thing about calculating calories and macros, however, as today’s Amazing Loser Bassam has recognized, is that it doesn’t cut any particular food group out of your diet. Rather, it helps you to be mindful of which foods are satisfying your cravings versus which are satisfying your hunger.

Here’s Bassam to tell you in his own words how you can have your cake and get fit too.

Bassam, what circumstances led you to your highest weight?

My father has type 2 diabetes and was obese since as far as I can remember. He would encourage me to eat all the time with him and things slowly got out of control. I grew up overeating, constantly sneaking late night binges and eating with no regard to its consequences. As I entered my preteen years my mom was sending me to therapists and clinics to get my weight under control, as well as repeated scolding by my pediatrician. Nothing ever clicked.

I played sports growing up and was very active, specifically baseball and football, and I lifted heavy weights and hit the gym throughout college, and so my belief is as bad as it was it could have been even worse.

I fluctuated in college, losing a decent amount of weight going into freshman year, and again senior year. However after entering the real world and living on my own,  I absolutely blew up getting to 370 pounds. Probably on some of my worst days, sausage egg and cheese breakfast sandwich from Dunkin’ Donuts, cafe lunch like a buffalo chicken wrap with a bag of chips, a couple of Nature Valley or protein bars.

When I got home, that’s when it would get bad. I would heat up like 12 chicken nuggets, dump sauce and cheese on them and have a huge sandwich and some bag of candy. Then for dinner might be a huge portion of rice, corn and chicken dumped in sauce. Might follow that all up with ice cream, maybe another late night snack after.

I had to be doing 5000+ calories on some of those days, and I would consider it normal.

Besides the physical pain and long term negative health effects, it was tough growing up as the fat kid. Kids would make fun of you, sometimes as friends, sometimes not, and it would affect you a lot more than you think, especially as a kid.  While friends might think they’re just joking around, it would be embarrassing, and it also led to some bullying. Luckily, being the big kid I was, I could defend myself, but I’d be lying if I said some of those words didn’t cut deep.

It also affected my relationship with my parents, as it got to the point where my father would look at me in disgust and yell at me for over eating, even as he did the same thing. My mother would yell at me for overeating and being inactive as well, and although I know she had good intentions, it wasn’t the best way to go about things.

I also hated anything where weight became an issue, like amusement parks, rides, beach, etc.

I felt like I missed out on a lot growing up because of my weight.

[blocktext align=”right”]I felt like I missed out on a lot growing up because of my weight.[/blocktext]

I had herniated disks from football, and one day my leg started hurting,  getting worse and worse until the pain nearly had me in a wheelchair. It was sciatica pain from the immense pressure on my already damaged back.

On top of that I was depressed,  and hated the direction my life was taking.  I had attempted to cultivate interest with women I liked,  and it went absolutely nowhere. That’s when I knew something had to change permanently. I had reached a breaking point and  I needed to change; I couldn’t be obese my whole life. It was affecting every single aspect of my life,  from health to family, friends, recreation and romance. I had gotten to a point where I could barely walk. I was done with it.

This time I had a plan that I researched myself.

I started calorie counting and aimed for 2600 a day. I wanted to retain as much muscle as I could, so I set up a protein goal and aimed to hit it.

I was already hitting the gym somewhat consistently,  so I knew a solid amount. I started to make sure I was hitting the gym at least 5 times a week. I then picked up running,  specifically the program c25k.  I built up my stamina to easily doing a 5k three times a week. As I lost weight,  I would lower my calories goals appropriately, and would adjust my macros to make sure I was hitting my goals,  with my primary focus still being protein.

A big thing too was looking at calories as a weekly goal. That way I could be more lenient on the weekend and be able to enjoy myself and some of the treats I still love.

I logged my food the day before,  so each day I knew exactly what I was going to eat.  That helped,  because I knew what I would be eating and taking the guess work out is huge.  Also I really have to ask myself if I’m hungry, or can it wait, because once I eat this it’s gone for the day!

I probably would have failed if I didn’t have a strict game plan in the beginning. I think calorie-counting is great because you can still occasionally indulge without completely restricting foods you enjoy. I have failed before on stricter diets,  the key is making sustainable changes.

Plenty of ups and downs. Still, to this day, if I have a big weekend my water weight will fluctuate +10 pounds, it’s crazy. If I look at my chart over two years it is definitely not a straight line.  The key is to live a little –  I still drank, did the cookouts, went out, all that, just more in moderation.

It’s hard sometimes to realize the day-to-day isn’t a big deal,  and that maybe I overdid eating one day and I might feel bad about it,  but realize in general my habits are way healthier than they were before, and I can get back on track no problem.

No one really got in the way. I guess it was tough when everyone wanted to go out and party. I passed on a lot of nights out because at one point I became almost afraid of over eating and drinking. My friends were super supportive though, and would definitely make adjustments to their plans to help me out, whether it be where we went to eat or what activities we would do.

My mom was there for moral support, but no one was really around to actually help.

Honestly, my biggest “support” was browsing other people’s stories on places like reddit.com/r/loseit and websites like this and seeing that success is attainable. I also followed people on YouTube – obese2beast is amazingly inspirational.

I’m more confident and feel way better. I have more energy, I can do a lot of things I would be nervous to do before, even basic things like amusement park rides or go-kart racing, or anything in public – riding the bus was a miserable experience for me before.

I did my first race last summer, the Spartan Super, which was a 9 mile obstacle course. I never thought I’d be able to do something like that.

I can walk into the “regular” section of the store,  and actually buy clothes I want.  That still surprises  me and I feel sometimes like a fraud in that section. I have to realize that’s actually who I am now.

People in general are nicer,  and women pay you a lot more attention than before. I can’t really blame anyone,  but it’s kind of sad to see just how much looks play into how society views and reacts to you.

The short term gratification the food is giving you is not worth the aches, pains, and terrible overall feelings being overweight comes with from a mental and physical health perspective. Your life can and will be so much better once you get control of your obesity!

You’re POTUS for the day, what one law do you bring in to help others who are obese?

I would make it mandatory that everyone have free access to the gym and health tools like meal plans and calorie counting. Getting up and moving is what really motivated me, and seeing those visual milestones.

What 3 things do other fat men need to know about losing weight?

Our thanks to Bassam and don’t forget – as with all our Amazing Losers and their weight loss before and after stories, you can find Bassam on Talk and ask him anything you like!