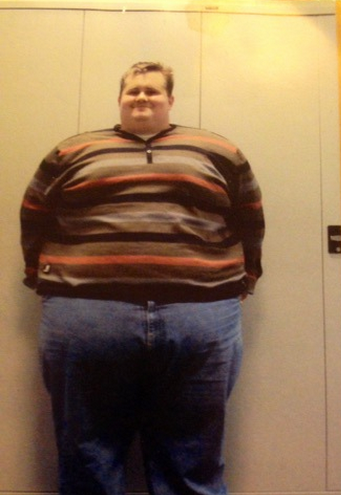 Rob, a lot of our readers might think they recognise you from somewhere – tell them where they might have spotted you before.

I was on series five of Supersize vs Superskinny and lost quite a lot of weight related to that, but after the show I was unfortunately attacked by trolls and the national papers gave me the name of The Human Doughnut. I’d get letters telling me I should kill myself and people would put donuts through my door with sharp metal inserted into them in the hope that I’d eat it I suppose and die. It was a terrible time, I was scared and I turned back to food and put all the weight on again.

What do you think drove people to target you like that?

I think they just saw someone who was fat and they assumed that I didn’t work and I was on benefits and there’s just a lot of hatred towards that sort of person. They saw me as an easy target. After I started eating again I went up to my heaviest weight and it wasn’t until I saw a doctor that I actually snapped out of my thinking. He told me that it was likely that I was going to die in my sleep. That hit home. I didn’t want to die and this time I realised that I could lose weight for me, not for anyone else saying, “you need to lose weight.” This time I wanted to do it for me.

You’ve lost weight before, so did you have a plan and know what you were going to do?

No! I’d spoken to my doctor who wanted me to do the NHS diet which they predicted would result in the loss of a pound or two pounds a week. I honestly didn’t feel like I had that long. Then a flyer came through the door for Lighter Life and I gave them a call. They said to make an appointment with a local consultant and I went from there.

Lighter Life is a meal replacement strategy. I think I was eating between 600 and 800 calories per day, which I was getting in the shape of four meal replacement bars. There are a few different flavours of bars and they’re really dense so it takes about 15 minutes to eat them. They also do shakes and soups but I didn’t really go for them. For around 20 months all I ate was four Lighter Life bars a day – even on Christmas Day I just stuck to the bars!

Wow, that’s an insane amount of self-control – did you find it hard to stick to?

No, I was losing weight and I could feel that it was having a difference. I also found that the Lighter Life group sessions were very useful as they work though different work books that help you think about food in a different way and the group sessions was a men-only group. It’s strange but even though I lost over 30 stone in 18 months I still felt fat until the very end. Other people were saying that your body shape is changing, and I could tell it was but I still felt like I was fat. At the very end my face started to get thinner and I found that I was wearing smaller clothes. Now I frequently find that I’m walking down the street and people I know don’t recognise me, I have to explain to them who I am!

Presumably you eat a wider range of foods now?

I do still eat Lighter Life bars but I mostly just eat well health balance meals which I cook my self or with my parents but I also eat  food for my training now so I tend to have quite a protein rich diet.

When did you get into exercising?

I started after I’d been doing Lighter Life for a few months and I went to my doctor to ask if he’d refer me to a GP referral exercise scheme, but he wouldn’t. He said that I was still too big and they wouldn’t accept me. I said, give me the guy’s number and I’ll phone him myself! I went to see him and he said that he couldn’t let me do anything with the machines because I was over the top range of the weight, but he worked out a programme that I could do in the pool to start off with. 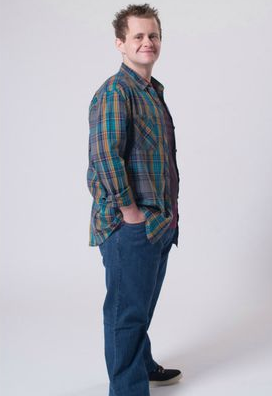 So I started in the pool and swam and did exercises there. Then after I’d kept going and kept losing weight I started to use the gym, then I lost more weight and started to use the machines. These days I do a lot of cardio like running, cycling, cross-trainer, Nordic walking and I also do free weights, but I’ll focus on a different part of my body every day – so this morning I was doing arms, chest and lats. Tomorrow will be legs and shoulders.

And your weight loss might even have led to a new career, is that right?

Yeah, I saw this advert where you could train to become a gym instructor and a friend of mine said – that sounds great for you, why don’t you do it. I thought about it and thought, why not! So I’ve now done most of the course and I would like to work with other people who have weight to lose when I qualify simply because I know exactly what it’s like to be in their position – and worse.

So what would you say to those people who want to win their battle with fat?

It’s simple – you have to pick a system and stick to it. Lighter Life worked for me but it might not be for everyone. You just have to find what will work for you and then stick to it. There will be points where it gets harder but again you just need to keep going and you’ll get there.

Our thanks to Rob for sharing his story – have you ever been trolled or attacked because of your size? How did you handle it?