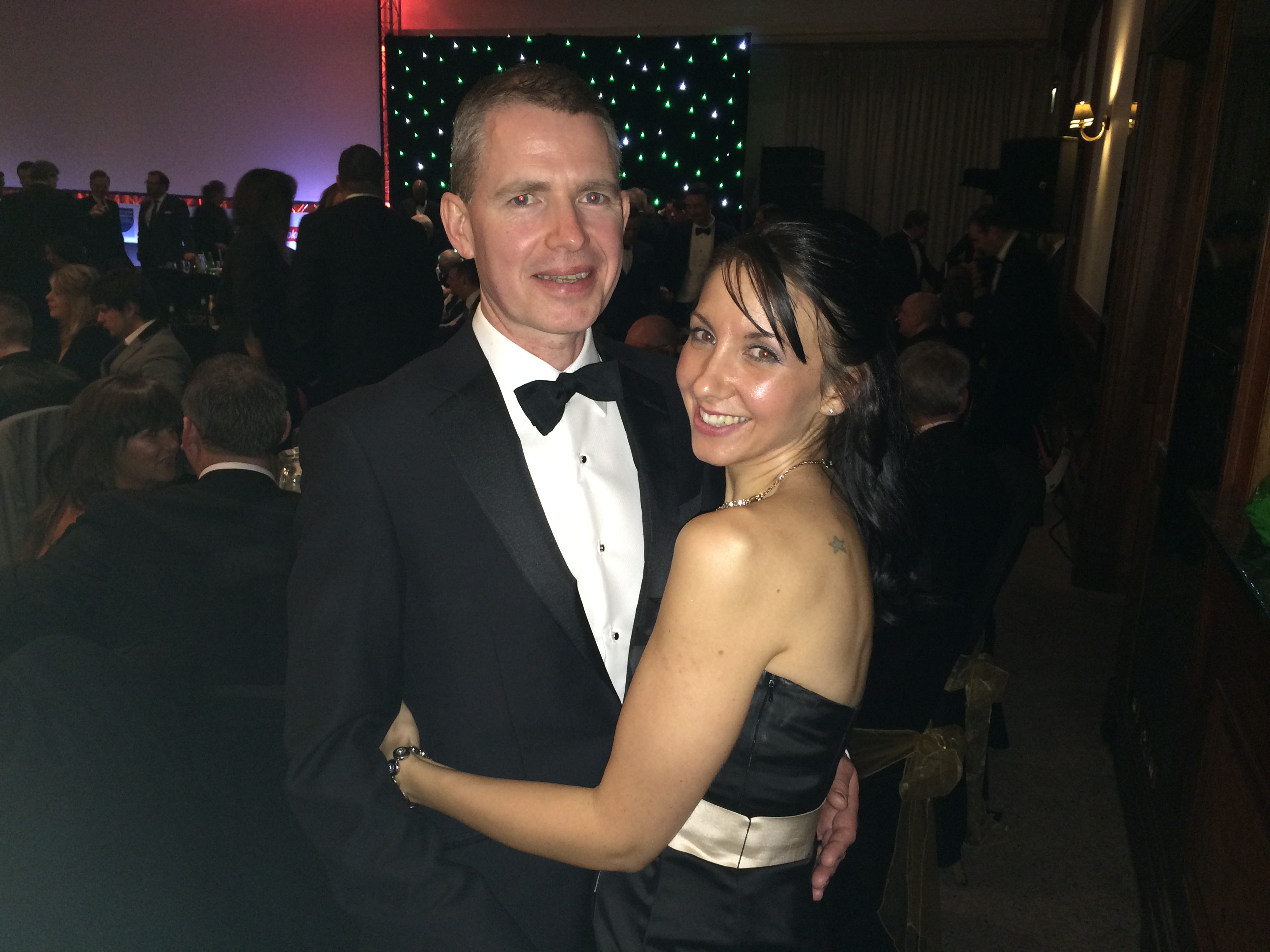 Tell us about why you decided to make a change and lose weight.

We’d come back from a holiday and my eldest son had thought he’d put a bit of weight on over the holiday, and when we came home he asked his mum to help him as she is very good at controlling her weight. She will do Weight Watchers or Slimming World to maintain her weight, and my son did brilliantly and got everything under control, which was great but I just couldn’t imagine myself at a Weight Watchers or Slimming World class. I knew I was big but I thought, “Well, I’m 44 now, it’s probably too late to lose weight. My metabolism has slowed down and I’m just getting bigger.” 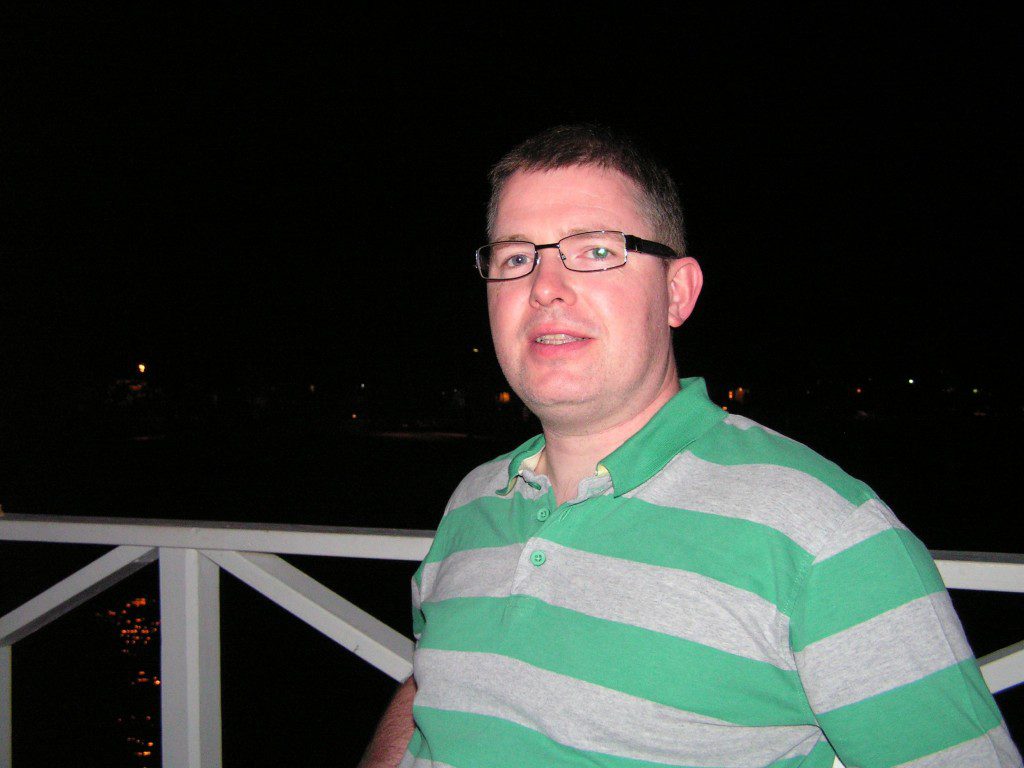 Then the email came through for Football Fans In Training and I just instantly thought, “That’s the thing that is going to get me going,” and because me and the boys go to watch Celtic that was one of the main things that drew me in.

On the course you spend 12 weeks meeting up once a week at the football ground with other guys who want to lose weight. They take you through all the basics of nutrition and looking after your weight and at every meeting you do some training with one of the coaches from the football club. Because I knew it would be other blokes who looked like me, I felt more comfortable about going along – it just sounded right for me.

What actually happens on the FFIT courses?

It was mostly education and training. When I lost the weight people kept saying to me, “what diet did you do?” and I had to say that I didn’t! It was education from the FFIT course. For me the biggest thing was realising about portions. We eat very healthy food at home but I was just eating massive amounts of it and not moving enough. One week on the course they showed us what the correct portion of different foods were and I’ll be honest it was a bit of a shock.

A good example is like at home we ate a lot of pasta, we’d cook a big bowl of spaghetti and sauce and I was from an age when you ate what was on your plate and I would just finish it all. After that lesson I was going home and actually weighing the pasta and putting in four portions for me the wife and the kids. The other killer was that I didn’t exercise at all, I did no exercise and if it was a case of going to the corner shop, I’d send the kids to go.

How did the course help you change?

One of the first things they did on the course was to give us a pedometer to record the number of steps we were taking in a day. The big driver of the course was not about going on a diet, but to be able to sustain it. It was also about upping your exercise levels, they emphasised that it’s not about having to go to the gym, it’s not about being a marathon runner, it’s simply about doing more than you are doing now and reducing what you are eating. Simple really!

So that’s just what I did. We live in quite a small village near Glasgow and my wife and my two sons we just thought, right we’ll go for a wander. So we just went out the front door, took a right and went for 40 mins and walked 2.5k, so I started doing that a bit more regularly. I love watching football and we had a treadmill which I bought a few years previous to that, but I had never used, it was a clothes horse in the back room! So what I did was I put a small television in the spare bedroom and started watching the football on the treadmill while walking. I tried to run at the start but it just wasn’t happening. I was walking for up to two hours when the football was on probably about four times a week and it built up to me thinking, “Well, I’ll start running now.” So I’d run for a bit and walk for a bit then I got on the treadmill and I could run 5k. 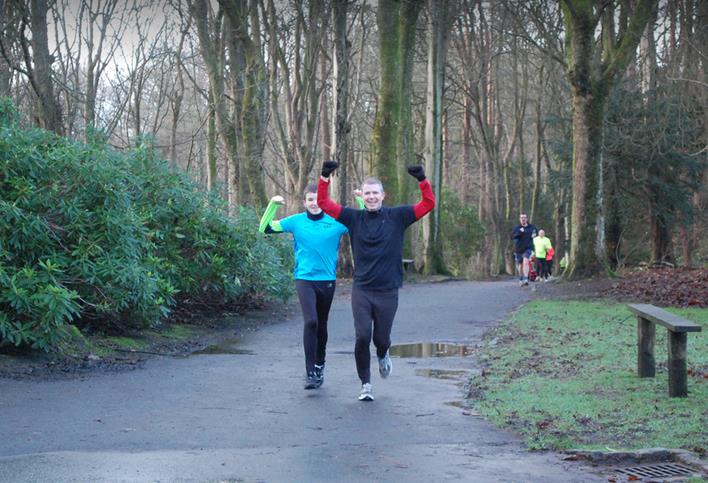 After that I started getting out of the house and me and the two boys ran the 2.5 k route that we first walked, and then that built up to running past the house for a second lap and doing 5k outside. Then that grew to going to a Park Run every Saturday morning, which is a free timed 5k event every Saturday morning all over the country. From there I joined the Bellahouston Harriers – a local running club – and now I am running regular 10k races and I am wanting to do a half marathon in the very near future.

Running is clearly a big thing with you – why do you like it?

I love running. It’s great because you don’t need any equipment, a pair of trainers and shorts and you’re out of your front door. You don’t have to book into a gym, you don’t need to go at a certain time, if you have got half an hour to spare you can run. Initially, when I was conscious that I was still carrying a bit of weight I didn’t want my neighbours to see me! But after the first time I just thought, “This is me now I’m not going to stop.” It was interesting on the course though because everyone had their own way. One of the older chaps couldn’t do a lot of exercises as he had quite serious problems with his knees but he swam and lost an awful lot of weight just through regular swimming – so although people might think they have problems and it’s not for them – there is always something you can do to do.

Did you enjoy the workouts on the FFIT course?

It was great. I think because everyone there was a football fan – and I’m not sure that everyone was a Celtic fan – it was really good banter. You’d go along because you wanted to have a laugh. There was also a lot of support from both the coaches and the rest of the guys on there. In the exercise part of the course we would do football drills and a lot of running. Then there would be like circuit training where there were different stations and it was about doing as many as you could at each station, so running around with the medicine ball or squats with the medicine ball, sit ups at another station, lunges or crunches at a different station. It was great fun.

I remember that first week exercising they said, “Listen just walk, jog or run round the pitch – whatever you can, whatever you are comfortable with and whatever distance.” I did about 2 to 3 laps and I was jogging and I couldn’t speak. When the group got back together again the guys were saying how do you feel that went and I couldn’t even tell them, I was in quite a bad way. I went from that to finishing that course where I was at the front of the group doing 12 laps of the park, running up and down, bombing into the stands in between laps and doing squats, push ups. On the last week, the trainers said to me and a couple of other guys, “Look, you’ll be setting the pace so keep it fast.” I was thinking, hang on I was at the back of the queue 12 weeks ago nearly dying!

How quickly did the weight come off?

Initially a lot of the guys were losing quite a bit of weight and for me it was a lot slower. There were guys coming in saying I’ve lost 6 kilos this week and I am thinking  – I was eating less than I’d eaten for 40 years and exercising more than I had done ever and I was a bit disheartened. But I got good encouragement from the family, friends and work colleagues who were really encouraging. They could see my face was slimming down, and people were asking “Are you losing weight?” Over the 12 week FFIT course I lost about 2 stone but once the course ended I continued to watch my food and run and continued to lose weight. I didn’t really set myself any target but I got down to 10 and a half stone and I thought I am feeling good about my weight and my size, and I don’t want to lose any more.

What do you wish someone had told you about weight loss years ago? 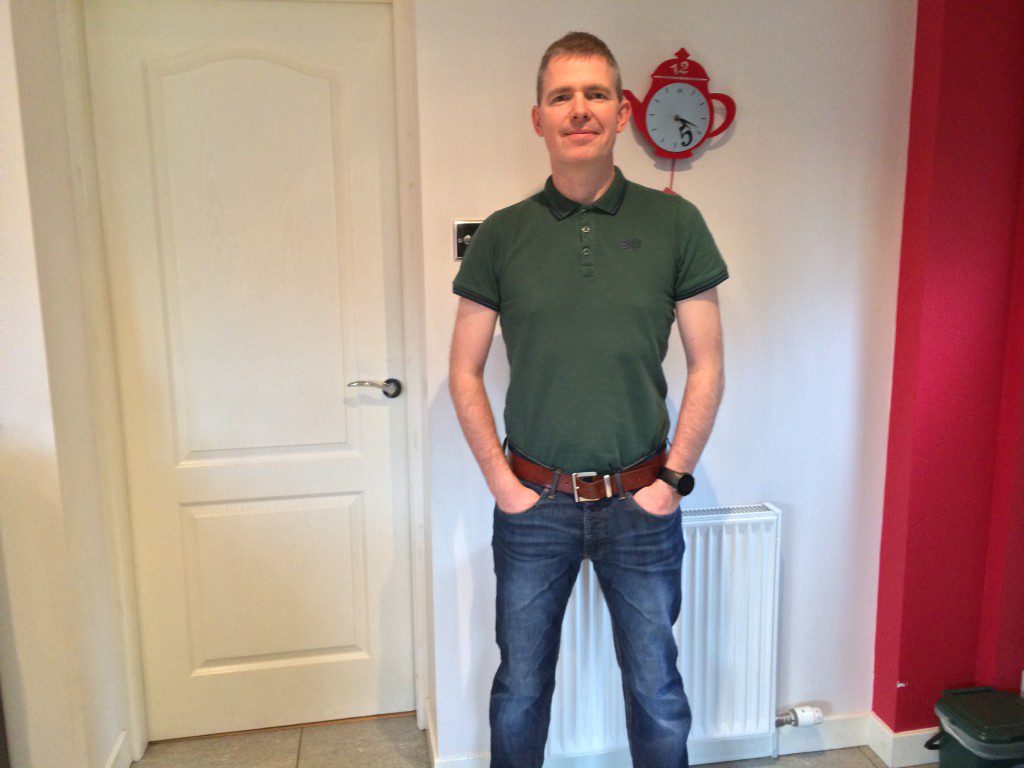 I wish someone had told me to just do something different. It doesn’t have to be much, but just do something different. You don’t have to go on a diet, you don’t have to completely change the food you are eating – but just start eating a little bit less, just start walking a little bit and with support and time you’ll start to see the results. For me FFIT was the one thing that changed my life. If I hadn’t done that course I’d still be sat here now, even bigger than I was, grumbling about the way things never changed for me, not knowing how different things could be.

Congratulations to Brian. Do any of your local sports clubs offer any kind of service like that? Would you be more likely to give it a go because it was attached to your favourite team?